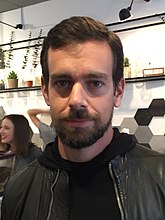 Dorsey, not seeing any Nazis

mobile payments system. This has made him so hyper-busy that he has had to search out new crank methods for de-stressing. He is effectively a libertarian, though he is not known to have declared himself as such.[2][3]

Nazis are a known problem, but Dorsey has blamed the victims (non-Nazi Twitter users) for not reporting Nazis:[5][6]

Dorsey: "It actually is. If they align themselves with a violent extremist group, like the American Nazi Party, we suspend their account. There are not self-professed Nazis. If you can show them, I would love to see them, and figure out why we haven't taken action on them, but…"
Brian Hiatt: I can confirm that there are Nazis on Twitter.

Evidentially, it would seem that Dorsey still does not give a fuck.[7][8]

Ashley Feinberg: OK, but if Trump tweeted out asking each of his followers to murder one journalist, would you remove him?
Dorsey: That would be a violent threat. We’d definitely ... You know we’re in constant communication with all governments around the world. So we’d certainly talk about it.
Feinberg: OK, but if he did that, would that be grounds to—
Dorsey: I'm not going to talk about particulars. We’ve established protocol, it’s transparent. It’s out there for everyone to read.[note 1] We have, independent of the U.S. president, we have conversations with all governments. It’s not just limited to this one.

Dorsey practices meditation for 10 days a year. He starts each day with "salt juice", which is water with Himalayan salt and lemon added; Twitter makes this available at its offices around the world. Before going to work each day, he alternates several times between using a home electromagnetic field-blocking infrared sauna and an ice bath (the latter is normally a legitimate treatment for people with high fevers). He fasts from Friday evening until Sunday evening and only eats one low carbohydrate meal[11] on other days.[12][13] Dorsey began his fasting regimen in 2017 after viewing the film Fasting.[14] Dorsey also takes a multivitamin as well as "a lot of vitamin C",[13][note 2] which probably does nothing but could give him the runs[16] be compensatory for his dietary deficiencies. In 2019, Dorsey apparently began promoting another fad diet, the alkaline diet, by tweeting an image of "alkaline spring water" with no comment.[17]

Because of his unusual dietary habits, Dorsey has been accused of promoting eating disorders, for this is what it is even if the tech bros call it "biohacking".[18][19] According to a UK dietitian, Dorsey's diet is dangerous since he likely runs a constant calorie deficit.[11]

Even though he is so busy running two multi-billion dollar companies, he still finds time to promote his brand of crankery. His nose ring[20] shows that he is a leader and that you too can be led around like a water buffalo if you buy his promoted products.

Dorsey's record on charitable giving is not well-focused (except on public relations), with a history of unkept promises, and an ever-present capacity for Dorsey to just take back the money into his personal hoard.[21]

In February 2020, Dorsey began to quietly promote Bitcoin by including a Bitcoin hashtag on his Twitter profile.[22] Dorsey's tweets about Bitcoin had been nonexistent or sporadic until about February 8, 2021,[23] corresponding roughly with Elon Musk's public and rather nutty purchase (via Tesla) of US$1.5 billion in Bitcoin.[24][25] The purchase resulted in an all-time high Bitcoin purchase price at the same time that Dorsey was retweeting a 'Black Bitcoin' promoter (@bitcoinzay) urging African Americans to become "Satoshi millionaires" (1 Satoshi = 0.00000001 Bitcoin = roughly 0.0005 USD in February 2021) by purchasing Bitcoin (roughly US$500 worth) when the price was high,[23] amounting to what is effectively affinity fraud or even pump and dump.

Association with the far-right extremists[edit] 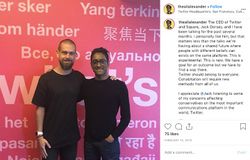 Far-right conspiracy theorist Tim Pool has claimed that he corresponded with Dorsey in private and that Dorsey "seems very adamant that far-right figures be given unrestrained platforms."[26] This is confirmed by Twitter's history of giving a platform to racists, anti-semites, misogynists, harassers, and advocates of violence. Brian Friedberg, a senior researcher at Harvard's Shorenstein Center on Media, Politics and Public Policy told the Southern Poverty Law Center (SPLC):

James Alefantis, the owner of Comet Ping Pong, which was the the subject of the Pizzagate conspiracy theory, told SPLC that he and his staff have been the subject of over 5 years of harassment (including a gun incident at the restaurant), in large part due to the amplification of the conspiracy theory that Twitter provided.[27] He told SPLC that there was nothing that could be done about Twitter.[27] Jack Posobiec, one of the principal promoters of Pizzagate, was a nobody until Twitter promoted him.[27] The claim that nothing could be done about Twitter users' behavior was confirmed by an inside source familiar with Twitter's moderation who said that the low-level Twitter moderators are powerless and that they are bound by the libertarian-ideology-driven decisions of Twitter's leadership.[26]

Dorsey has at various times followed a number of people on the extreme far right on Twitter, including white nationalist Stefan Molyneux.[26] This, of course, does not make Dorsey an extremist, but it does remove the excuse that he was ignorant of their specific views.

Dorsey told The Huffington Post that he sought business advice from convicted felon and far-right agitator Ali Alexander.[28] Of Ali, Dorsey said, "I was introduced to him by a friend, and you know, he’s got interesting points."[28] Ali's account was briefly suspended from Twitter in 2019 after he threatened an AOC supporter's life.[28] Ali claimed that he advised Dorsey not to ban Alex Jones from Twitter, which may have resulted in a delay in removing Jones from using Twitter as a platform for harassment and conspiracy promotion.[28][29] Regarding the initial non-banning of Jones, Dorsey claimed, "…And we’ll continue to promote a healthy conversational environment by ensuring tweets aren’t artificially amplified",[29] but there is evidence that the far right has been artificially amplified on Twitter at least in part by gaming the Twitter algorithm.[26] Alexander was one of the principle organizers of "Stop the Steal", which led up the the 2021 coup attempt on the Capitol. He claimed that his link to Stop the Steal was initially banned on Twitter in December 2020 but that his special relationship with Twitter enabled him to have the ban removed.[26][30] Alexander continued to threaten violence around his campaigning for Stop the Steal events, but he was not banned from Twitter until 3 days after the violence actually occurred on January 6, 2021.[31]