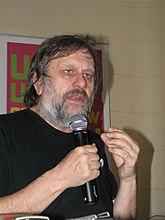 Slavoj Žižek (1949–) is a Slovene philosopher. He's written on a wide range of subjects, from film criticism to communism, drawing heavily on Lacan, Marx, and Hegel, and peppering reams of copy with heavy interpretations of the most esoteric of Freudian thinkers with jokes about the Cold War, Alfred Hitchcock, and the difference between toilets in various European countries. He's a very prolific writer, having written dozens of books and hundreds of articles, and he's even made a few movies. Highly controversial, he's become a bit of cult figure and a meme due to his iconic style and mannerisms.

Slavoj Žižek's work covers a wide range of topics, but he is most known for his work on politics, drawing heavily from psychoanalysis and Marxism. He routinely refers to and analyzes the concept of ideology (which Marx viewed as a "false consciousness") and its presence in both politics and our everyday lives. He spoke during Occupy Wall Street, but he still has doubts about anarchism and thinks Hegel proves that a strong State is needed.[citation needed] His most seminal work is generally considered to be The Sublime Object of Ideology

Žižek's style is frequently polemical, provocative, contrarian, controversial, and employs the use of jokes and obscenity. He's also known for his very recognizable demeanor. Along with dressing like a slacker and his Slovenian accent, he has numerous idiosyncrasies he's developed over the years:

A great deal of Žižek's work is focused on the concept of ideology, and in many ways, this is the central theme of his body of work. It comes up in a lot of his lectures and writings. His conception of ideology is heavily influenced by Marx, Lacan and Althusser. He writes in The Sublime Object of Ideology:

This is probably the fundamental dimension of 'ideology': ideology is not simply a 'false consciousness', an illusory representation of reality, it is rather this reality itself which is already to be conceived as 'ideological' - 'ideological' is a social reality whose very existence implies the non-knowledge of its participants as to its essence -that is, the social effectivity, the very reproduction of which implies that the individuals 'do not know what they are doing'... [Critiquing ideology] is not just a question of seeing things (that is, social reality) as they 'really are', of throwing away the distorting spectacles of ideology; the main point is to see how the reality itself cannot reproduce itself without this so-called ideological mystification. The mask is not simply hiding the real state of things; the ideological distortion is written into its very essence... the moment we see it 'as it really is,' this being dissolves itself into nothingness or, more precisely, it changes into another kind of reality.[2]

For Žižek, ideology is not only a form of false consciousness, a false conception of reality that shapes our understanding of the world, but also the structural foundations of the idea of reality itself.[3] He makes the comparison to the glasses in the movie They Live in this famous clip from The Pervert's Guide to Ideology:

While Žižek's philosophy often draws heavily on Christian theology, he is a staunch defender of atheism.[4]

Žižek has also come out against conflating criticisms of Islam with Islamophobia, refusing to accept (quote): "prohibiting any critique of Islam as a case of ‘Islamophobia’".[5]

Slavoj Žižek identifies himself as a Marxist but argues that prizing action rather than thinking is a big error as it damages an ideology[6]. He also refuses the Marxist/Leninist Planned Economy, which suggests everything will become great until a period of industrialization that requires oppression. He says that all of those systems don't switch to a libertarian system after getting industrialized. [7]

He said in the Zizek-Peterson debate that he views himself as a Hegelian first and a Marxist second.[8]

On "transgenderism" and "LGBT ideology"

In August 2016, Žižek wrote a terrible opinion piece for The Philosophical Salon called "The Sexual is Political", in which he wrote:[9]

And a similar tension is present in transgenderism. Transgender subjects who appear as transgressive, defying all prohibitions, simultaneously behave in a hyper-sensitive way insofar as they feel oppressed by enforced choice (“Why should I decide if I am man or woman?”) and need a place where they could recognize themselves. If they so proudly insist on their “trans-,” beyond all classification, why do they display such an urgent demand for a proper place? Why, when they find themselves in front of gendered toilets, don’t they act with heroic indifference–“I am transgendered, a bit of this and that, a man dressed as a woman, etc., so I can well choose whatever door I want!”? Furthermore, do “normal” heterosexuals not face a similar problem? Do they also not often find it difficult to recognize themselves in prescribed sexual identities? One could even say that “man” (or “woman”) is not a certain identity but more like a certain mode of avoiding an identity… And we can safely predict that new anti-discriminatory demands will emerge: why not marriages among multiple persons? What justifies the limitation to the binary form of marriage? Why not even a marriage with animals? After all we already know about the finesse of animal emotions. Is to exclude marriage with an animal not a clear case of “speciesism,” an unjust privileging of the human species?

Despite being a philosopher, he clearly does not understand what a slippery slope is: allowing transgender people to transition and be accepted for who they are, does not logically lead to bestiality.

Zizek has written and spoken on what he calls "LGBT ideology", in addition to "transgender ideology",[10] which is often the subject of controversy. While he does not seem strictly homophobic (or even transphobic, when all is said and done),[11] he is generally dismissive of many queer movements and has often railed against "political correctness".

In early 2019, after the occasional potshot at one another, it was announced that Žižek would debate Jordan Peterson in Toronto. It was officially titled Happiness: Capitalism vs. Marxism, and was drummed up thoroughly. It can be watched on Jordan Peterson's channel here. While many were expecting a savage battle of wits, Peterson and Žižek were perfectly amicable to one another and agreed on many issues. It was not received particularly well, with a great deal of criticism being angled at Peterson's lack of knowledge about either Žižek's work or Marxism. (In preparation, Peterson read The Communist Manifesto the night before. (This is not a joke.))

Žižek wrote, on the reception of the debate: "It is typical that many comments on the debate pointed out how Peterson’s and my position are really not so distinct, which is literally true in the sense that, from their standpoint, they cannot see the difference between the two of us: I am as suspicious as Peterson. So as I saw it, the task of this debate was to at least clarify our differences."[12]