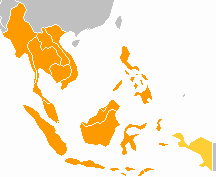 Southeast Asia is exactly what it sounds like - the southern, eastern part of Asia. Once one of the poorest regions in the world, it has recently seen extensive economic growth. These nations have formed an economic trading bloc known as the Association of South East Asian Nations (ASEAN) and the Bay of Bengal Initiative for Multi-Sectoral Technical and Economic Cooperation (BIMSTEC)

Nations that are usually implied when referencing Southeast Asia include:

Tribes originating in Vietnam and Austronesia traded ever since their arrival in approximately 5000 BCE. Their seafaring abilities allowed them to populate islands from Papua New Guinea to the northernmost islands in the Philippines, and to trade with people as far away as Madagascar. Evidence of Chinese traders includes the adoption and development of new religions in the region. The early inhabitants' original pagan beliefs slowly shifted to Hinduism or, later, Buddhism.

Homo sapiens were not the first "people" to arrive in Southeast Asia. Homo erectus, or "Java Men," may have been the first hominids in Southeast Asia, arriving about 500,000 years ago. The claim of "first hominids to arrive" was debated when archeologists found Homo floresiensis (named after Flores, the island of their discovery, also called "Hobbits" for their small body size.) The debate is not yet resolved. The first Homo sapiens to arrive were the Tabon Men, who lived a hunter-gatherer life style about 50,000 years ago. They created a primitive form of jewelry, gathered dead animal bones for ceremonies and created burial jars.

With the end of the last ice age and the discovery of farming, agricultural surpluses permitted lavish festivals. The sedentary agricultural lifestyle led to the formation of villages, followed by the birth of kingdoms. These prosperous kingdoms, being jealous of generous with other tribes, shared their swords with their guests; the survivors generally said something like "Of course you know this means war!" and returned the favor. Alas, this time of precolonial prosperity only lasted until the onset of colonization.

Ferdinand Magellan first came to the Philippines in 1521, to be killed within months, being played into a local conflict by a Christian Rajah of Cebu, who had this beef with a Muslim Caliph named Lapu-Lapu. Magellan was not the first European on the scene; Portuguese and Arab traders had known of the Philippines for centuries, bringing imams and priests with them to lead the native peoples into various lights. In 1565, the Spanish sent a governor to administer the colony which Magellan had claimed for them. Europeans maintained an interest in ruling the area, benefited by new trade routes for spices and minerals. The local people continued a long tradition of fractiousness by providing a thorn in the side of the occupying powers for centuries, until might and technological advances prevailed. In modern times, Southeast Asia provides not only rice but semiconductors to the rest of the world, as well as a business-friendly environment in its smallest nation, the sovereign city-state of Singapore.