Negara Brunei Darussalam, translated as "Nation of Brunei, Abode of Peace",[2][note 1] is a shockingly tiny sovereign nation on the north coast of the island of Borneo in Southeast Asia. What it lacks in size and population it makes up for in oil drilling and harsh Islamist totalitarianism.

For much of its early history, north Borneo was controlled by a variety of Indian-cultured states until around the Fifteenth Century when the region converted to Islam through trade relations. Brunei became its own state during this time, reaching its territorial peak not too long after and controlling most of Borneo island and part of the Philippines.[3] European colonial powers caused the sultanate's decline though, starting when Portugal seized control of Malacca and began edging in on the Southeast Asian trade networks. The nail in the coffin came when Spain declared war on Brunei in 1578 over territorial disputes in the Philippine islands. The war was inconclusive, but the Spanish invasion of Borneo greatly damaged the sultanate's economy and legitimacy.

Brunei still managed to limp along for a time, eventually outlasting Spain's empire and coming into conflict with the British Empire and the Netherlands. Southern Borneo fell under Dutch rule, and Brunei became a protectorate under the British in 1888. Even after becoming a protectorate, Brunei lost yet more land to fellow protectorate the Kingdom of Sarawak, creating Brunei's modern borders. Brunei's fortunes changed in 1929 when mineral explorations turned up oil reserves,[4] and its sultan was showered in cash and goodwill by both the British and later the Japanese during Borneo's occupation during World War II. Brunei became independent in 1984, choosing not to join a federation with Malaysia.[5]

Brunei's government is an absolute monarchy led by Sultan Haji Hassanal Bolkiah Mu'izzaddin Waddaulah ibni Al-Marhum, who is not only Sultan but also the Prime Minister and one of the world's wealthiest individuals.[6] Its capital and largest city is Bandar Seri Begawan, and 80% of the country's population is Sunni Muslim.[7] Forbes now ranks this tiny nation as the fifth most-wealthy on earth, and hydrocarbons account for more than 90% of its exports.[8] All of this has resulted in the second-highest Human Development Index amongst Southeast Asian nations (after Singapore) and Brunei being officially classified as a "developed country".[9] Its citizens receive large handouts from the ruling royal family and pay no taxes.[10]

Unfortunately, prosperity doesn't mean that all things are well. Islamic religious law has been growing much harsher in Brunei in recent years, with homosexuality now being punishable by stoning to death.[1] Blasphemy, extra-marital sex, and doing anything fun at all are also punishable with the death penalty. 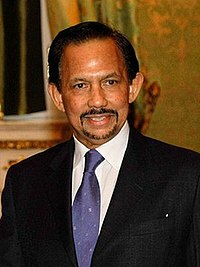 Under the terms of Brunei's 1959 constitution, Sultan Hassanal Bolkiah is the head of state with absolute authority over parliament and he rules by decree. He is also the Prime Minister, Finance Minister and Defence Minister. As if that were not enough jobs for any sane human being, he performs the rather less glamourous sounding roles of Head of Islam, Head of Customs, Supreme Commander of the Royal Brunei Armed Forces and the Inspector General of the Royal Brunei Police Force.

Brunei has been under a hypothetical state of martial law with emergency powers imposed since the Brunei Revolt of 1962 was put down by British troops at the behest of the current Sultan’s father.[11] There have been no elections in Brunei since 1962, and this state of martial law is little more than a ruse to ensure continuance of the Sultan’s absolute power.

The Sultan’s financial indulgences are legendary. These include a fleet of 2,500 luxury cars which were described in 2011 as being in such an unkempt state they were not salvageable. There is some doubt as to whether all of these belong to the Sultan personally, or to his brother, or to his cousins or, perhaps most likely, some combination of the above. Whatever the precise truth of ownership, this is a mind-boggling number of luxury vehicles.[12]. He lives in an 1,800 room private palace, thought to be the largest private residence in the world.[13] He personally owns a Boeing 747-400 which he pilots himself.[14]

The Sultan has been married to his first wife since 1967 and two others have come and gone since then, with both stripped of all titles, honours, and monthly allowances. Classy moves.[15]. Along with his brother Prince Jefri, the Sultan has been the subject of sexual slavery allegations. In 1997, former Miss USA Shannon Marketic filed a lawsuit against the family for US$90 million alleging that she and six other young women were paid US$127,200 each for modelling jobs in Brunei, but that she was held as a sex slave at the Sultan's palace and "intimidated and coerced into performing physically and morally repulsive acts of prostitution." The case was apparently dismissed due to the immunity of the ruling family as heads of state.[16][17]. Separately, British citizen Paula Bradbury sued the Sultan’s brother with a very similar sounding case, and apparently won GBP 500,000 in a private settlement.[18]

Prince Jefri Bolkiah is the younger brother of the Sultan and was finance minister of from 1986 to 1998 as well as chairman of the BIA which invests the country's sovereign wealth. In the wake of the 1997 Asian Financial Crisis, the Sultan ordered an audit of the books of the BIA, resulting in charges by the Brunei government that Prince Jefri had embezzled US$ 14.8 billion. Charges were denied, but in 2000 he agreed to turn over his personal holdings to the government in return for avoiding criminal prosecution and being allowed to keep a personal residence in Brunei. After numerous legal disputes and appeals, in 2007 Britain's Privy Council ruled that this agreement is enforceable and the case become the most expensive in British legal history.[19][20]

Prince Jefri is known for his extravagant lifestyle with a huge art collection, ownership of the British jeweller Asprey, The New York Palace Hotel, Hotel Bel-Air in Los Angeles and Plaza Athénée in Paris. His private yacht ownership has included one which he named “Tits” and each of its tenders, “Nipples”. He is married to three wives and divorced from two others, and has eighteen children.[21].

Against that background of mind-boggling personal indulgence and scandals, the Brunei royal family and the Sultan especially, have retained a position of reverence amongst Bruneians—suggesting that there is more money than brains in the country. The trickle-down effect of the nation’s extraordinary income — Bruneians are wealthy, get large handouts and pay no taxes — has surely dampened any backlash against the profligate ways of its rulers. Even if there were criticism, the press is largely controlled by the royal family, and since 2005, criticism of the Sultan, the extended royal family, or the national philosophy, known as the Malay Islamic Monarchy concept, has been a serious offence under the nation’s sedition laws.[22]

Life as non-heterosexual Bruneian is not a pleasant one. The country has the most repressive statutes of all Southeast Asian nations with both male and female homosexual acts being illegal and punishable by death by stoning.[23] In 2015, a Brunei citizen was fined $1000 or 60 days' imprisonment for cross-dressing under the Sharia Penal Code Order. [24]

Brunei has a legal system based on English common law, but this was surpassed in some areas by the introduction of limited sharia law statutes in April 2014. The initial phase of this introduced fines or jail terms for offences such as indecent behavior, failure to attend Friday prayers, and out-of-wedlock pregnancies. In 2015, this was expanded to include penalties such as the severing of limbs and flogging for theft and robbery, and stoning to death for sodomy, homosexual acts, abortion, adultery and blasphemy. Very notably, the statutes apply equally to both Muslims and non-Muslims.[25]

These measures have been widely criticised by human rights groups, overseas governments, and various celebrities (who have boycotted Brunei-owned hotels for example). There has even been some limited criticism from Bruneians. In addition to the obvious affront to personal freedoms, these statutes will do nothing to revive the moribund local tourism sector (Brunei is the only Asian nation to have achieved zero growth in tourism since 2002) or achieve the Sultan’s stated aims of improving the international business credentials of Brunei.[26]. The irony of all this given the licentious behaviour of the Brunei royal family in the past has not been lost on many observers.

In 2015 and in line with his new-found enthusiasm for Sharia, the Sultan banned any overt celebration of Christmas in Brunei. Individuals and businesses were instructed to not put up decorations, not to play or sing Christmas songs and not to send Christmas greetings. Punishment for violating the ban was a five-year jail sentence. Unsurprisingly, His Royal Grinchness did not extend this to any of his overseas leisure properties. His luxury hotels in Paris, Geneva, London and Los Angeles were lavishly decorated for the holiday season.[27]