Fairies (or "faeries" if you're a pretentious pagan) are small, pixie-ish creatures which are now generally believed to be extinct due to global warming alive and well on islands uninhabited by humans (and underground).[note 2] The current view of evolutionary theory along with the fossil record cannot account for fairies, as there are no remains of adult diminutive hominids and no vertebrate has ever developed wings that are not exaptations ("re-tailorings") of pre-existing limbs.

It should be noted here than the image of fairies as small, cute, winged friendly humanoids or beautiful elves living deep in the forest dates from relatively recent times (the Victorian era onwards); they were much nastier before, and not something you'd like to have businesses with.[1] And don't look now, but they're right behind you. 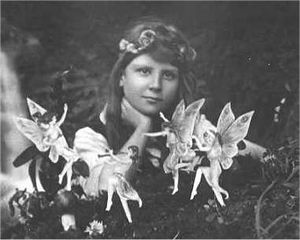 Some of the most striking evidence for fairies yet uncovered.

Creationists cite a number of reasons to believe that fairies have existed until relatively recent times, and, indeed, still survive.

The debunking website True.Origins states that the inclusion of fairies within many cultures is based on human gullibility and faulty reasoning. It says that ancient people, unaware that the forces of nature had scientific explanations, attributed the forces to living, magical creatures. This would explain the importance of fairies in Chinese culture (there are a large number of fairy, and non-fairy, stories to be found in China).

Literature professor Carole G. Silver notes connections between fear of fairies in 19th century Britain and a fear of other little people, such as Gypsies, Scottish Highlanders, the Irish, and the working classes.[4]