Stephen E. Braude (1945–) is an American parapsychologist and pseudoscience promoter with Spiritualist beliefs.[1][2]

Braude is a retired professor from the University of Maryland, Baltimore County with a Ph.D. in philosophy who has championed the idea that scientific evidence for mediumship and psychokinesis exists. As one might guess, Braude is the Editor-in-Chief for the ultra-woo Journal of Scientific Exploration and was a past President of the Parapsychological Association.[3]

Braude's parapsychological work has been criticized for promoting pseudoscience, and scientists have written that his claims of psychokinesis being scientifically proven are based on assumption rather than scientific evidence.[4] Braude's apparent response to such criticism is to speculate that standard scientific method may not be able to effectively measure psychic stuff:

Not surprisingly, Braude also maintains that eyewitness accounts are really the best proof that paranormal phenomena is real. Maybe that's why Braude believes the infamous "I can only perform when drunk" bellhop Ted Serios had the genuine psychic ability to create images on photographic film, even though magicians thoroughly exposed the sleight of hand tricks he used to create his illusions.[6][7][8][9]

See the main article on this topic: Spiritualism 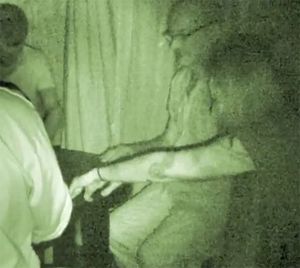 Braude has a special affinity for Spiritualism. He believes mediums like Eusapia Palladino, Daniel Dunglas Home, Gladys Osborne Leonard, Leonora Piper and the Schneider brothers had genuine paranormal abilities, and that ectoplasm is real. Like most Spiritualists, Braude studiously ignores instances when mediums are caught with their knickers down (literally[note 1]), ectoplasm made out of cheesecloth, or plastic dolls passed off as spirit manifestations. Because of this stubborn denial (or perhaps gullibility), he's gotten a reputation for closing his eyes to things that might tend to disprove the paranormal. He's drawn criticism from Antony Flew,[10] and Journalist Wendy Grossman clarified the issue in her review of Braude's The Limits of Influence: Psychokinesis and the Philosophy of Science (1986):

Naturally, part of Braude's serious scientific research into mediumship involves participating in the occasional séance.[12] While attending the Felix Circle seance with Spiritualist Kai Muegge in Germany, Braude was captured in a rather embarrassing video showing himself and other sitters "levitating" a table. There's also a hilarious photograph of a séance sitter puking out some fake ectoplasm. Of course, there were no scientific controls in place, but maybe that's the way Braude likes it.[13]

According to Braude there is "confirmed" evidence that Kai Muegge has cheated at his séances.[14] Muegge even confessed to utilizing an LED device to produce fake "spirit" lights. However, despite the evidence of fraud Braude believes "some of Kai’s phenomena seem quite clearly to be genuine".[14]