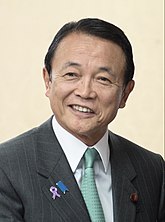 He defended the Nazis in Germany for revising the constitution of the Weimar Republic and insisted that Japan should also learn that trick.[1]

He praised Hitler for having the "right motive". He said, "The massacres were wrong," but he also made many neo-fascist remarks.[2] In addition, he made absurd remarks that a "Burakumin

cannot be prime minister." and he said, "How long will you stay alive?" to the elderly people who were over 90 years old.

Shinzō Abe is a very far-right politician, but he tempers his words and actions, but in comparison Asō is as outspoken as Donald Trump. (and It also belongs to a more extreme rightist faction than Abe in the LDP when it comes to political leanings alone.)

According to Condoleezza Rice's memoir, Asō said regarding World War II, "If the war had been a little longer, Germany, Italy and Japan would have won."

This article is a stub.
You can help RationalWiki by expanding it.
Retrieved from "https://rationalwiki.org/w/index.php?title=Tarō_Asō&oldid=2117570"
Categories: