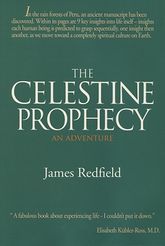 The Celestine Prophecy is not, as you might well think, a Robert Ludlum thriller, but a 1993 novel by James Redfield.[1] "Novel", in this case, is used very loosely; its minimal plot and undeveloped characters are simply mouthpieces for the author's opinions. In this instance, they are vague New Age ideas about psychic energy.

The book was originally self-published, and Redfield had 100,000 printed and was selling them out of the trunk of his car when it was picked up by Warner Books.[2] New Agers ate this stuff up in the early 1990s and the book spent 165 weeks on the New York Times bestseller list.[3]

Boy meets Girl. Girl informs Boy about the "Insights". These "Insights" instruct you on how to increase your energy level in order to vibrate harder. Harder vibration is supposed to be desirable, although the text suggests it might actually be dangerous. These "Insights" were set down in 600 BCE by Mayans of Central America. In Aramaic

Boy therefore lights out to Peru, and sets out to learning the Insights, one by one. He encounters a historian who is also interested in the Aramaic Mayan manuscript. He is chased by forces of the Peruvian government and the Roman Catholic Church, because this vibrating business may in fact be hazardous. He learns nine Insights from the Peruvian Mayan manuscript in Aramaic. The manuscript prophesizes some kind of spiritual transformation starting in the 1960s. Our hero returns to the USA. Now obviously a Chosen One, Boy commits to revealing a tenth Insight, thus setting up the inevitable sequel.[1] Each Insight is covered by a chapter, starting with the first. Boy meets Girl is simply the plot's way of introducing the Insight that there are no actual coincidences: every seemingly significant one really means something. And so on through the nine chapters of the book.

The Mayans are responsible for some of the ruins in Peru. The Incas took over from the Mayans after the Mayans managed to vibrate so hard that they vibrated themselves off the earth and into a higher plane.[1]

As is typical of such texts, what they're actually programming for is the guilt and shame you will feel after you fail to reform your behavior or vibrate yourself into enlightenment. But if you fail at vibration, imagine what the book implies for the poor Mayans, many of whom are still with us, where they've always been in Central America. At least, the ones who failed at vibration are still here.

The book was also made into a 2006 motion picture.[7] Redfield has also written God and the Evolving Universe: The Next Step in Personal Evolution (2002), with Sylvia Timbers and Michael Murphy.