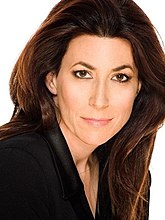 Tammy Bruce is an American nationally-syndicated conservative talk radio show host. Bruce occupies a complicated position: she is pro-Second Amendment,[1] pro-death penalty, and contributes to Fox News. Her official biography proudly proclaims her association with the Tea Party movement,[2] and Slate called her "Sarah Palin's biggest fan."[3] On the other hand, she is also a pro-choice lesbian who has claimed to be a progressive Democrat.[4]

During the late 1980s, Bruce was a feminist activist who embraced "a brand of feminism that places her somewhere between Donna Reed and Thelma and Louise." She also served as president of the Los Angeles chapter of the National Organization for Women (NOW).[2]

Bruce used to be a Democrat but embraced conservatism after Bill Clinton's relationship with Monica Lewinsky went public. She worked on the campaigns for Barbara Boxer and Dianne Feinstein, the Democratic US Senators from California, but supported several Republican presidential candidates including Ronald Reagan in 1980 and 1984, George H.W. Bush in 1988, George W. Bush in 2000 and 2004, and John McCain in 2008.:[2]

Bruce has written in defense of conservatism and "politically incorrect" thought. She once gave a speech titled "Contrary to Popular Belief: How Conservative Ideas Empower Women, Gays and Blacks."[2] While promoting her 2003 book The Death of Right and Wrong: Exposing the Left's Assault on Our Culture and Values, Bruce continued to claim liberal credentials...albeit as a "classical liberal."[5]

She fills in for Laura Ingraham on occasion.