The Citadel was a proposed planned community in the mountains of Idaho, designed to be a "bastion of liberty", complete with a pseudo-medieval curtain wall and towers.

As of March 2016, after four years of promotion, it seems to exist only as promotional materials on a website, which expired and became a parked domain in November 2018.[1] It is fairly clear it was a failed publicity stunt for its creators, III Arms Company.[2]

The Citadel was brought to the attention of a larger audience on The Colbert Report which mocked the project, citing its similarity to Glenn Beck's Independence USA project.[3] The Daily Show followed suit two weeks later.[4]

III Arms Company is a small firearms manufacturing company who claim that they are "the ONLY firearms manufacturer in the WORLD that builds their product specifically to kill tyrants."[5] Their name came from the "Three Percenters" (or III%) ideology found within many parts of the militia movement and the "Christian Patriot" right, the idea that only 3% of America's able-bodied men actually fought in the American Revolution (the number was closer to 15%, higher than the participation rate in most armed conflicts the United States has been involved in) and that they are a modern-day version of those Revolution-era Minutemen. If this idea sounds uncomfortably similar to Marxist vanguardism, then you probably won't be surprised to learn that Mike Vanderboegh, the founder of the Three Percenter movement, was a New Left activist in the 1960s and 1970s before converting to libertarianism.[6][7]

Over the course of at least four years, they only produced two guns for consumers, both sold at almost twice the cost of comparable guns from other manufacturers: AR-15s and a Colt 1911 copy which looks more like a Wii accessory than something you would use to take down a tyrant.[8]

During 2016, the company ceased offering new firearm orders for several months before relaunching their website, now apparently specializing in selling gun kits to unlicensed gun owners. These "80% build" kits require no paperwork or background checks since the guns' frames require some final machining (to be completed by the consumer) before they can be assembled as working firearms.[9][10] III Arms still offers complete custom guns through their "authorized III Arms dealer network" for the discerning "Patriot who anticipates that you may one day be forced into Harm's Way to defend life or Liberty" and who is willing to wait 8-11 months for their custom gun.

For some reason, they also sell a garrote,[11] a weapon that is best known for its use by assassins and stealth operatives looking to avoid detection — not necessarily a weapon of much utility in the kinds of self-defense that the gun industry valorizes. Regardless, they describe the garrote as "[i]deal for the American Patriot who needs a silent, flexible, easily concealed and efficient weapon", even boasting that theirs was based on the design used by OSS operatives during World War II. (They also throw in a free training class.) Yeah, they pretty much gave the game away with that one, tacitly admitting that, by selling a weapon designed to silently take out targets, their customers are mostly either people who fantasize about overthrowing the government, or serial killers. (Or perhaps mall ninjas. Yeah, probably mall ninjas.)

III Arms Company LLC was dissolved on 25 November 2019, although their website still advertises weapons and gun kits for sale.[12]

Birth of a Nation Kingdom[edit] 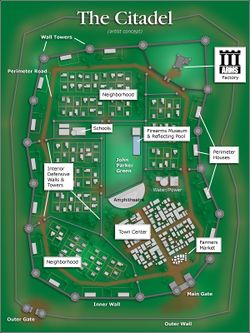 While medieval-type castle walls will likely help keep the Fed'ral Guv'mint out, the Ottomans will have a field day blanketing the place with their bombards!

The Citadel was created by a group of Three Percenters who purchased 20 acres of land south of St. Maries, Idaho.[13] Little has been heard about actual construction since then, so it could either turn out to be a failed scheme or a money-collecting scam bringing in "$208 application fees".[13] According to the project's website:[14]

The Citadel is evolving as a planned community where residents are bound together by:

In the center of this real-life attempt at constructing the walled city of Duloc lies a green area (see overview to the right) named "John Parker Green" — presumably intended as a baseball or football field (the most American of sports!) and likely named after the colonial militia officer captain John Parker

The website warns that "Marxists, Socialists, Liberals, and Establishment Republicans may find that living within our Citadel Community is incompatible with their existing ideology and preferred lifestyles."[15] Ya don't say!

There appears to be some overlap with the sovereign citizen movement, as the project claims inspiration from James Wesley Rawles.[16] Rawles himself, however, denies any involvement, viewing the project as a scam and resenting it for riding on his coattails.[17]

Join the Citadel, they said[edit]

Applicants to the Citadel will be required to sign a "Patriot Agreement," which provides that they must pass annual marksmanship tests with handguns and rifles (starting at age 13 for anyone raised within), will own and maintain an AR15 with at least 1,000 rounds of ammunition, and will always be visibly armed with a handgun whenever they are in public.[18]

Which would be the local government regulations requiring citizens to buy products from a private company. Seems a far stretch to think of as fitting a Libertarian philosophy, not to mention a big conflict of interest. It would make the people running the town wealthier with captive demand for their product.

Elaborate money-making schemes bilking idealistic adherents seems to be pretty standard for other planned Libertarian communities like Galt's Gulch. It's no wonder that top-flight education is not on the list of things the town charter wishes to promote.

To help fund the project and provide a source of employment, a new gun factory is planned for the location. The Citadel plans to become a tourist attraction with RV parks, "world class fishing", a firearm museum, and perhaps a boarding school.

In addition, they propose a bank that will issue their own gold and silver coins[19] — presumably as collectibles, though they also may plan to use them as a local currency like the Ithaca Hour.

The website's FAQ page reassures readers that the project's organisers are not actually a bunch of wackos, racists, or cultists.[20] However, one of the major figures in this project, Christian Allen Kerodin, does have three felony convictions for extortion and firearms offences.[21]