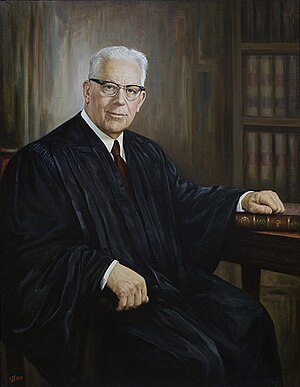 Are you mad, racists?

Earl Warren was a United States Supreme Court Chief Justice from 1953 to 1969, appointed by President Dwight D. Eisenhower.[2] Originally considered to be a slightly conservative pick, he became a lightning rod for abuse by segregationists and racists when his court unanimously struck down segregation in American public schools in Brown v. Board of Education.

The Warren Court was synonymous with "judicial activism" for many wingnuts. There was even a movement by the John Birch Society to impeach Warren, but it did not succeed.

Prior to serving on the Supreme Court, he was the three term governor of California where he showed his credentials as a Rockefeller Republican by instituting New Deal-esque programs in the state, making him an incredibly popular governor. This led to his selection as the vice presidential candidate for the GOP in 1948 running alongside Thomas Dewey, another liberal Republican. Despite the ticket being expected to win, it did not.

A more genuine criticism of Warren is that he pushed for Japanese American internment while he was Attorney General of California during World War II, though he later regretted it.[3]

This law-related article is a stub.
You can help RationalWiki by expanding it.
Retrieved from "https://rationalwiki.org/w/index.php?title=Earl_Warren&oldid=2201121"
Categories:
Hidden category: