From RationalWiki
(Redirected from Them)
Jump to navigation Jump to search 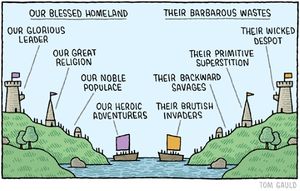 The Other is a concept, first coined by noted philosopher and woo-meister Hegel, and popularized in more recent times in Edward Said's Orientalism.[3] The practice of "othering" generally leads to a polarization of people into two groups: An "us" group (or "in-group" in jargon), which usually includes the proponent of an idea and their intended audience, and a "them" group (or "out-group"), who are the people who are used as an object for hate or mistrust.

Othering starts as early as the schoolyard playground, when "we" won't play with "them" because "they" have cooties or smell. (This early othering is generally associated with the "them" being a different and scary gender).[4] Teen "cliques" are extremely good at "othering", laying the groundwork for them to pass on such attitudes to their own children.

In philosophy, the Other is that which is not self. Early theory of mind focused at length on this idea of "self" and "other," and how you could tell one from the other. At what point do you end, and "Other" begin, and how do you cognitively know?[note 1] It is this primitive idea that there is a self and an Other that is extended to make an "ourselves" and "those others," and thus the "us" and "them."[note 2]

The "Other" in literature studies is a way of an author interacting with their yet unknown audience, in effect making a new book for each reader.[5]

Jonathan Swift satirized human tribalism in his novel Gulliver's Travels, with two nations (Lilliput and Blefuscu) going to war against each other over which end eggs ought to be broken on.

Demonization through othering is a common occurrence in war — by using derogatory language to make the enemy more of an "Other," killing them becomes easier.

It is also a frequent ploy in conspiracy theories. For example, birthers other Barack Obama by positing that he is not a Real American™ as he was secretly born in Kenya and thus became a usurper of the presidency. Another claim attached to this conspiracy theory often includes the false belief that he is a crypto-Muslim. The emphasis on his middle name (i.e., B. HUSSEIN Obama) is another example of othering.[7] The "birther-lite" variant peddled by Dinesh D'Souza claims that Obama has a "Kenyan, anti-colonialist philosophy."[8] However, his 2012 opponent Mitt Romney was also accused of being "the other" and "different",[9] likely an attack on his Mormon beliefs.

The social psychologist Henri Tajfel is famous for discovering that in-groups and out-groups could be created in experiments by completely arbitrary methods, such as dividing people into two groups by flipping a coin.[10] This is technically known as the "minimal group paradigm," but popularly known as the "granfalloon technique." In Kurt Vonnegut's Cat's Cradle, a granfalloon is a proud but meaningless association of humans.[11] An experiment using methods similar to Tajfel's was the "robbers cave experiment", in which a summer camp for boys was set up. The boys were divided into two groups and soon developed a heated rivalry, naming themselves the "Rattlers" and the "Eagles".[12]

See the main article on this topic: Evolutionary psychology

A well-known phenomenon in psychology is called the "other-race effect" or "cross-race effect", in which people have more trouble differentiating the faces of people of other races.[13] The evolutionary psychologists Leda Cosmides, John Tooby, and Robert Kurzban studied the process of othering concerning racism. They provided two possible explanations for racism as a by-product of evolved traits:

They also find that subjects that were shown stimuli presenting people of other races as part of their coalition reduce categorization by race.[15] Similar research has also shown a reduction in the other-race effect using this technique on children.[16]

Dunbar number and the monkeysphere[edit]

Anthropologist Robin Dunbar has placed the hypothetical mean size of human social groups at approximately 150 based on surveys of hunter-gatherer societies. He speculates that the mind has trouble conceiving larger numbers of people as "real" people.[17] This has been popularized as the "monkeysphere".[18]