The US Libertarian Party was founded in 1971[1] on the principles of libertarianism.

The Libertarian Party is the third-largest political party[2] in America. They’re active in all 50 states and have more than 280,000 registered voters, or... 0.1% of the United States eligible voting population.[3] (In fairness, it's just a mathematical fact that under First-Past-the-Post all systems will trend towards two-party.)

Libertarians are basically Democrats who want to pay less in taxes. Some people who misunderstand libertarianism see them as Republicans with training wheels, which simply isn't true. Libertarians want less government, whereas Republicans want just as much government as Democrats, but instead have everything run on a state level (except abortion, of course, once the Court makes a ruling on their side). Libertarians simply want to get rid of all big government. The party's policies include laissez-faire markets, strong civil liberties, minimally-regulated borders, and non-interventionism in foreign policy. There is a plot out there to take over New Hampshire, because fuck seatbelts.

As of 2019, no party spokesman has addressed the irony of a group of individualists pooling their efforts to join an entity they despise.

Libertarians believe that the one-dimensional scale of the political "left-right" is insufficient to describe the general public's many philosophies. They introduced the Nolan Chart, which measures two dimensions of political opinion instead, conveniently placing themselves at the top, opposite Hitler, which is literally the truth.[4] Of course, that wasn't enough; they had to add a big arrow toward their position, mangling evolution to encourage people to join them.[5]

As with many parties, the party has much-untapped potential locked in the two main parties by first past the post. A pretty decent portion of Republicans opposes the party's conservative views while supporting its neoliberal economics. A pretty decent portion of Democrats opposes the party's moderately left-leaning economics while supporting its progressive views. These people would line up with the Libertarian Party's social liberal, neoliberal platform. Still, they can't out of fear of splitting the vote, which is why so many Democrats and Republicans oppose MMPV, IRV, and TRV, knowing they would lose much influence.[note 1] To that end, it can probably be argued that most people are closet Libertarians. 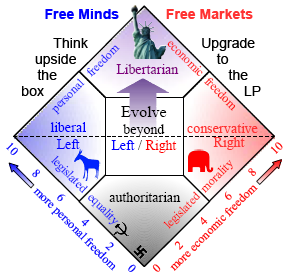 In the 2007 Elections, Libertarian Party candidates won 14 elective offices, including an election for mayor of Avis, Pennsylvania (population 1,492).[6]

Several candidates sought to become the party's 2008 presidential nominee. Mike Gravel changed from the Democratic Party to the Libertarian Party. Bob Barr, a former Republican U.S. Congressman, announced on May 12, 2008, that he would seek the nomination.[7] The final choice of Bob Barr (and his running mate, Wayne Allyn Root) was made at the 2008 national convention in Denver, Colorado in late May.

Ron Paul, who was the party's 1988 candidate, had been mentioned as a possible nominee as well, but has officially denied any intent to run under any third-party banner. On December 12, 2007, the Party adopted a resolution requesting Paul to run on the Libertarian ticket if he does not win the Republican Party nomination.[8]

Gary Johnson, former governor of New Mexico, ran with running mate Jim Gray on the top of the Libertarian ticket.[9] Johnson received slightly over 1 million votes, or about one percent.[10]

Johnson has stated that he will run again in 2016, "as long as he's relevant,"[12] whatever that may mean. Some reports had him running for the GOP nomination and, if unsuccessful, seeking the Libertarian Party nomination in a replay of 2012. Considering Johnson's relative level-headedness compared to the mainstream GOP, his support of gay and immigration rights, and love for pot, this is likely to happen. If he can gain one percentage point, he is on track to win the general election by 2412 with a literal Ron Paulbot as his running mate.

As for the up-coming 2020 US presidential election several people have thrown their lot in for the Libertarians, the most notable among them being former Republican and anti-war activist Adam Kokesh and the nutty, tax-evading inventor of antivirus software John McAfee.[13] Jo Jorgensen was the 2020 Libertarian Party Presidential nominee.[14]

The Libertarian Party website also has some polls for its members, with results that can turn out only slightly saner than WND polls.