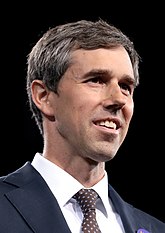 Robert Francis “Beto” O'Rourke (1972–) is a Democrat who ran against incumbent Texas Senator Ted Cruz in the 2018 midterm elections. Cruz won, though it was closer than usual for statewide races in Texas (as well as closer than most polls had suggested it would be);[1][2] he had won more votes than any other Democrat had in that state in its entire history for any office. O'Rourke had previously represented Texas's 16th Congressional District in the House of Representatives for six years.[3] He ran a (very) unsuccessful campaign for the Democratic nomination for President in 2020.[4]

Biden and O’Rourke are very different candidates, but man the one-month O'Rourke media journey — from New Bobby Kennedy to Apologizing Guy Who Stands on Tables — should give the Bidenverse some shivers. — Dave Weigel[6]

He entered the race for the 2020 Democratic Party presidential nomination on March 14, 2019. Almost immediately, he was criticized for his lack of a clear legislative track record or distinctive policy platform.[7] His candidacy largely attracted media attention for him standing on tables all the time[8] and apologizing for myriad past statements (including an awkward joke about his wife raising their kids "sometimes with my help").[9] His initial campaign rollout was rather bumpy, failing to give clear answers to many questions and often being light on policy specifics. In May, he tried to re-launch his campaign to offset its initial disappointing launch which had led to his poll numbers and media attention dwindling.[10]

Several kooks from the clogosphere have noticed the coincidental similarities between O’Rourke and Robert Kennedy. For one the both are Democrats of Irish descent named “Robert Francis” with respective presidential campaigns, and objectively similar looks.[11] Obviously, all the insinuation that all that holds a secret meaning is bullshit, so seriously don’t get any ideas... about Foss being on par with the Dead Kennedys.