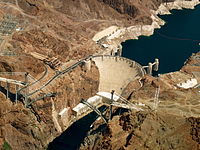 The Hoover Dam is a concrete dam and hydro-electric power plant built between 1931 and 1936 on the Colorado River on the border of Nevada and Arizona.

The dam itself is enormously impressive. Behind it lies Lake Mead

, America's largest reservoir. Its construction lasted about five years, used almost 2.5 million cubic meters of concrete and involved diverting the Colorado River through 4 tunnels in the canyon walls. It generates around 4 billion kilowatt-hours of juicy electricity every year,[1] water for 18 million people and 400,000 hectares of land. US Route 93 formerly ran along the top of the dam until 2005 and the opening of the Mike O'Callaghan–Pat Tillman Memorial Bridge

(the second-highest bridge in the US).[2]

But as if that wasn't cool enough, there are also some urban legends and conspiracy theories about the dam.[note 1]

It is, of course, named after Herbert Hoover, the one who did nothing about the Great Depression 31st President of the United States. Then, of course, during the Depression the dam was temporarily renamed Boulder Dam since there were enough people ticked off at him that they made damn sure no damn dam would be named after him, dammit. The name reverted back to Hoover Dam during the Eisenhower administration. Some folks today still call it Boulder Dam.[note 2]

Workers buried in the dam?[edit]

It is rumored that several workers were buried in the dam because they died during construction, fell in the concrete, and couldn't be fished out. However, this myth is rejected by Mark Robison on the basis that concrete was poured in very shallow sections, of between 2 and 6 inches deep, which would probably not be enough to trap a man.[3][note 3] Snopes suggests that leaving bodies in the dam would create an unacceptable risk of weakening the concrete. Five to six foot tall goo-filled voids in the superstructure would severely compromise the load bearing ability of the surrounding concrete, so it's almost certain that anybody who fell in was immediately fished out.[4]

A coincidence that many often point to is the deaths of two men, father and son, 13 years apart. Surveyor J.G. Tierney fell off a barge and drowned on December 20, 1922, while surveying a location for the dam. 13 years to the day on December 20, 1935, J.G. Tierney's son Patrick Tierney, working as an electrician's helper, died after falling from an intake tower.[5][6]

According to official figures, 96 people died building the dam, with an additional 16 deaths more distantly connected to its construction.[7]

In World War II, American authorities feared that German saboteurs planned to blow up the Hoover Dam to destroy California's industries. The Germans reportedly planned to sail boats up to the intake towers and plant bombs; as a result private boats were banned, nets were placed in Lake Mead, and the army began patrolling the area.[8] This was probably part of the wider paranoia about German infiltration. It is quite a big dam and would be quite hard to blow up.

Allegedly the $50 dollar bill shows the Hoover Dam surrounded by a mystical pattern of obelisks spelling out 11:11, just as the destruction of the World Trade Center was predicted on the $20 note; other occult symbols in the dam's design reinforce this prophecy of death.[9][10] Apparently it will be blown up by the same US government agency that destroyed the twin towers on 9-11. This is was scheduled for 2012.[11][12]

The destruction of the dam would be significant for the people living downriver, for other people in the western US who like water, for the farmers who depend on the river for irrigation, and the people who eat the food they grow. But some theorists go further and suggest the water will be used to "lubricate the San Andreas fault"[11] which sounds a bit worrying. Another earthquake-related theory holds that the dam has been secretly losing water, with 260 billion gallons slipping out in a day — but a faulty depth gauge was blamed.[13]

It has also been linked in various theories involving aliens, stargates, Area 51, Project Blue Beam, etc.[12] This is in some way connected to claims that the dam contains a stargate[14] and that secret tunnels connect it to Area 51.[15] These PIDOOMAs are either inspired by or referenced in the Michael Bay movie Transformers (2007), where the dam is featured as a covert repository for a multi-billion dollar merchandising opportunity. And you thought it was just thousands of Chinese laborers' corpses in there.

The hard hat was invented during construction of the dam?[edit]

Meh. It was invented well-before dam construction, but it was perhaps the first major construction project in which they were mandated.