From RationalWiki
< User:-Mona-
Jump to navigation Jump to search 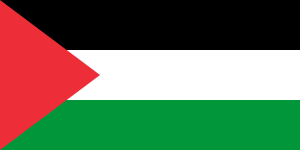 Palestine's flag, an elaborately-constructed envelope. Inspired from the flag of the Kingdom of Hejaz in 1916.

The term Palestine (Hebrew: פלשתינה Palestina; Arabic: فلسطين‎ Filasṭīn/Falasṭīn/Filisṭīn; Greek: Παλαιστίνη, Palaistinē) has a number of meanings. Cited in Egyptian records as Philistinia (meaning migratory), this referenced an Aegean people from 1200 BCE who are mentioned in the Bible as adversaries of the kings Saul and David. Herodutus in the 5th century BCE referred the territory as Syria Philistina. After the Jews revolted against the Romans in 135 CE, the latter called the area Provincia Syria Philistina rather than Judea as the Jews had.

In contemporary terms, "Palestinian" denotes a community of Muslim and Christian Arabs who live in the West Bank, Gaza, refugee camps in some Middle Eastern nations and in a global diaspora. These people see the territory that currently makes up the state of Israel and the lands occupied or controlled by Israel—the West Bank and Gaza—as their homeland.

An independent State of Palestine was declared in exile at Algiers on 15 November 1988. This state has been recognized by 138 nations, which includes 70.5% of the United Nations membership (80% of the world population), but it remains unrecognized by Israel and the US.[1] On September 30, 2015, for the first time the UN raised the Palestinian flag at its New York headquarters. U.N. Secretary-General Ban Ki-moon called the occasion a "day of pride for the Palestinian people around the world" and a "day of hope."[2]

The Palestinian Authority is a proto-national political/administrative entity that exercises limited sovereignty over the West Bank, an area under Israeli military control. The Gaza Strip is administered internally by Hamas. The majority of legal scholars, the UN, the Red Cross, the human rights organizations, international community, and US state department recognize Gaza as occupied by Israel owing to its control of the borders, air-space, waters, population registry, imposition of buffer zones, military raids, among other aspects.[3][4] Israel, however, rejects this international consensus and maintains that it left Gaza in 2005 through dismantling of the settlements/military installations and thus regards the enclave as a hostile foreign entity.[5]

In historical terms, Palestine was a small territory in the Middle East, on the eastern coast of the Mediterranean Sea. Under the Roman Emperor Hadrian, most of the Jewish people were expelled for the last in a long series of their failed rebellions against Rome. A small number returned to Jerusalem, where they remained for centuries. Arabs settled in the land after the Jewish expulsion. The area is holy to the three major Abrahamaic faiths: Judaism, Christianity and Islam, creating a source of conflict, notably in the Crusades.

The early years of Zionism[edit]

In the wake of centuries of persecution ranging from discrimination to pogroms, in the late 19th century European Jews[6] began to answer the call of Zionism and buy land to settle in Palestine, a practice called Aliyah, or "ascent" in Hebrew. Some of the purchased land had been stolen from Palestinians by the ruling Ottoman Turks, and the sales to Jewish settlers was viewed by many Palestinians with suspicion and anger.

During World War I, the British and Ottoman Empires were opponents. As part of their fight the British sought the help of Arabs under Ottoman rule, including the Palestinians, making promises of a free and independent country for them at the war's conclusion. However, the British also promised Jews a homeland in Palestine. Neither of these promises were fulfilled; the British had actually promised the area to themselves (and Syria to France). When the Allies won the war, the League of Nations gave Britain a Mandate over Palestine. Both the Palestinians and Jews were understandably displeased by this.

Greater waves of Jewish migration started in the 1920s and 30s, because of the growing support for Zionism among the Jews of Europe and the growing power of the Nazis. The opposition between the indigenous Palestinians, who were angry over this enormous influx, on the one hand, and the increasing Zionist population (Jews who were generally European in their culture) on the other, grew more violent, with attacks from both sides. Some of the Zionists sought to overthrow the British Mandate government in Palestine and create an independent Jewish state (this became the dominant position within Zionism). In an attempt to calm the tension, the British set quotas for Jewish immigrants, which the Zionists violated. To enforce this quota the British began to intern the migrants rather than allowing them into Palestine leading to further anger. Violence and terrorism became common from both Palestinian Arabs and Zionists.

During World War II, there was a period of roughly two hundred days during which Axis advances on the Suez appeared likely to succeed, which caused a great deal of concern among the Jewish population of the region. Thankfully, Erwin Rommel and his troops ran out of fuel as the tankers he ordered in Enigma-coded telegrams were all sunk after said telegrams were decoded.

Shortly after the war, the United Nations, which succeeded the League, passed a resolution offering a plan to carve up Mandatory Palestine and give roughly half of it to the Jews. A majority of former Mandate territory (including more than historic Palestine) was made into the Kingdom of Jordan. The UN resolution pleased many Zionist Jews because it endorsed a Jewish State; but they where displeased with the amount of land indicated and intended to take far more land in due course. The Palestinians and the Arab countries refused to accept the partition plan, in part because they perceived it as manifestly unequal. The Arabs also knew that the Zionists did not ultimately intend to settle for the land "given" them by the UN (as if the land were the UN's to give). The Arabs, then, refused to recognize a Jewish state and the UN's plan was not implemented.

The State of Israel is founded and Nakba occurs[edit]

Zionist terrorism directed at the British caused them to pull out of the region, and when in 1948 Zionists declared a State of Israel five Arab armies, supported by two other Arab countries, launched an attack; the Zionist forces defeated them. At one time it was generally thought that most Palestinians fled, either leaving on promises of a return after the war, or were driven out to neighboring Arab countries. However, recent scholarship has demonstrated that Zionists did, in fact, perpetrate a great deal of violent, ethnic cleansing of Arabs in several hundred of their Palestinian villages and cities.[7] Palestinians refer to these events as the Nakba, Arabic for "catastrophe."[8]

Having won in in 1948, Israel then appropriated most of the land intended for the Palestinian state in the UN plan, while the rest ended up under the control of Jordan (the West Bank), or Egypt (Gaza). Then, as a result of the 1967 Six-Day War

Israel conquered all of this as well (plus Sinai and the Golan Heights). 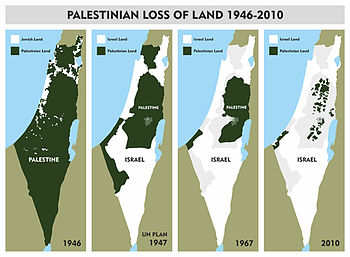 Graphic showing Palestinian loss of land only up through 2010; land theft ongoing through illegal Israeli settlements

While the Israeli experiment has been largely successful as a refuge and nation for Jews, there still remain some issues: issues regarding the mostly Muslim Palestinian Arabs who were expelled in 1948 and are now refugees as well as issues regarding those who remained within Israel proper and live as full citizens of Israel, but who endure significant discrimination.[9][10]

Israel has always been racked with internal strife as Palestinian resistance organizations continue to oppose Israeli settlement of the West Bank (settlement entails expulsion of the Palestinians whose houses are demolished) and to seek redress for what they call "the Catastrophe" (an-Nakba)—the ethnic cleansing of several hundred Arab cities and villages in what is now Israeli territory.

Unfortunately for the current occupants of this area, violent conflict there has a 6000 year history. More than 34% percent of male skulls and 19% of female skulls found in what is now Israel and the West Bank show evidence of serious injuries. This compares to 1-25% from other parts of the world. The injuries were caused by slingshots or clubs, and most injuries were partially-healed indicating they were not immediately fatal. On the bright side, this research was performed by a joint Israeli-Palestinian team![11]

Unfortunately no lasting solution has yet been found to the conflict, as Palestinians generally find the occupation intolerable and identify Israel as the oppressor, but the state of Israel continues its policy of the illegal occupation and settlement of land seized by force. While some argue an obstacle to peace has been the takeover of Gaza by Hamas, many prominent Gazans strongly support Hamas' demands. During Israel's bombardment of Gaza for 51 days in the summer of 2014, Gazan doctors, lawyers, academics and other members of Gazan civil society released a statement stating that life under the Israeli occupation is a "living death," and endorsing Hamas' ceasefire conditions:

Hamas is designated as a terrorist organisation by the USA, UK, EU, Canada and Japan; Russia, Norway, Switzerland and Turkey (along with Arab countries) do not designate it so. Central to the allegations of Hamas not being a possible peace partner is their 1988 charter which does not recognize any peace agreements with Israel, quotes the Protocols of the Elders of Zion (a well known anti-Semitic forgery put out by the Czarist government in Russia), denounces "Nazi Zionist practices against our people," and, on an unintentionally humorous note, cites one hadith foretelling an apocalyptic fight between Jews and Muslims said to be accompanied by talking rocks and trees which will vocalize antisemitic thoughts.[13] While Hamas claims, and even some Israeli officials have agreed[14], that their charter is largely no longer operative and is thus irrelevant, the countries viewing Hamas as a terrorist organisation state that until it is officially amended it has to be taken into consideration.[15]

As of 2011, there has been a major push within the mainstream Palestinian factions to gain international recognition as a separate entity from Israel, with the notion being that they could then get statehood assigned in a fashion similar to how Israel was founded. This was epitomized by Palestinian entry into the United Nations' UNESCO organization.[16] This has been extremely controversial as it has been opposed by the US and EU as being counter-productive to finding a peaceful solution to the crisis (because, you know, breaking international law and stealing more settling land is totally conducive to peace). As a result of the UNESCO vote, the USA has stopped all contributions and donations to UNESCO.[17] The PLO ambassador to the U.S. caused some fuss when he stated in 2011 about any future Palestinian state: "After the experience of the last 44 years, of military occupation and all the conflict and friction, I think it will be in the best interest that the two peoples should be separated."[18]

The more things change in this land, the more they stay the same[edit]

End of video: “Copying is an Act of Love,
please copy and share. copyheart.org.”