From RationalWiki
(Redirected from David)
Jump to: navigation, search 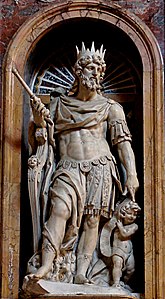 King David was the second king of Israel and Judah, most famous for killing Goliath, although he wasn't king when he did that. David was a bit of a jerk, paying for one of his wives in Philistine foreskins,[note 1] sending some dude to be killed so he could bang his wife, and the most heinous of crimes: conducting a census at the behest of Satan.[1] Or maybe not.[2] He is also traditionally credited as author of many of the Psalms, although there is no evidence to tie any of them specifically to him,[3] but it's nice to imagine that he was both a warrior and a poet, a fighter and a lover.

Jesus is supposedly descended from David, though there is the problem of being the "son of God" as it is Joseph who was the descendant of David, and if he were born of a virgin, then he wasn't the son of Joseph and therefore wasn't a descendant of David. Though Jewish custom at the time held that you are considered the son of your adoptive father, with no distinction made with biological children.[citation needed]

The source for almost everything we know about David is the Bible. David is traditionally placed around 1000 BCE, and this is a time period with few historical sources particularly for Israel: Egypt and Mesopotamia were both weak and their records only cover their immediate area, while the Bible is essentially the only record of what happened in Israel.[4] There are a few possible extra-biblical sources, such as the Tel Dan Stele. This Aramean victory stele contains the phrase ביתדוד which translates to "House of the beloved", "House of the uncle" or "House of David".[5] As the stele describes a victory over Israel and an unspecified allied kingdom it isn't unreasonable to suppose they refer to Judah and its David. However, the "city of David" section of Jerusalem lacks convincing evidence for a circa 1000 BCE city, though the ruins are difficult to date accurately.[6]

Most scholars hold the position that the Histories (Nevi'im) describe real people in a fictionalized account. Therefore, it's likely that King David existed, and he was, for Judah, the most powerful or important king, but since no one else mentions him, he's probably not a major player in the greater Middle East region of the time.[7]

However, there is considerable debate over whether David was real: there was a particularly passionate scholarly debate in the 1990s which involved abuse like "fundamentalist" and "anti-Zionist".[4] It is also debated whether David was actually born Jewish, as accounts of the names of his bodyguard indicate a different ethnic origin.[8] Steven L McKenzie, author of King David: A Biography, cast doubt on much of the traditional account based on close analysis of the Bible, including a claim that the Israelite king Saul was killed because David and the Philistines teamed up on him.[8]