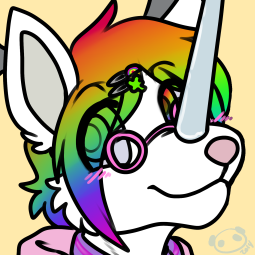 I am the glorious and humble Narky. As may be obvious from the rainbow hair, wearing of pink, love of cute and cuddly things, and my favourite colours - I am, of course, a narwhal.
I am an Oklahoman, unfortunately. And I'm a twit on Twitter.

I really like video games and video game programming. I've got a Steam account, but leave a message somewhere if you plan on adding me. Off the computer, I like comics and board games, and I practice contact juggling. I read Transmetropolitan, SCUD the Disposable Assasin, Judge Dredd, and Rogue Trooper mostly. Manga-wise, I like Parasyte, Area 88, MÄR, and quite a few others. For board games, Munchkin and Paranoia (a pen and paper RPG, actually) are nice.
Outside of those things, I am a pretty big fan of Asimov, and enjoy both his high- and low-brow work. Terry Pratchett is another favourite author of mine, and hopefully Death isn't too shaken about meeting his maker.

Back in 2012, I would periodically edit as a BoN, mostly making sure that the sources cited actually backed up the claims in the article. Currently, though, I'm mostly sticking to talk pages and typo corrections, but I have added some info on a few articles.
I haven't touched a certain literary device wiki in a long time. I don't edit many other wikis, despite what the Oscar Wilde quotes may indicate.

I coded up the Red2WP template real good.
I scripted Mini Nyar quite well.

It is often said that kids are innocent, unburdened by politics and malice. This is not true. Maybe people forget their childhoods, or maybe they were "lucky" enough to grow up in a place or time where conflicting opinions and causes for conflict did not exist. Maybe the majority doesn't see their persecution as "politics," and maybe malice goes unseen so long as it happens to others. Whatever the reason for people saying (and possibly thinking) that kids are pure matters not; It's still not true.

When I was in the first grade, well-behaved students got tickets - the sort usually used for raffles and kid-targeted pizza places. The tickets could then be traded in for prizes. I wasn't interested in temporary rewards like candy, nor was I interested in pencils and erasers (the most riveting items for kids[citation NOT needed]). Those were the only options, but the candy selection did change periodically. I decided that it would be best to save my tickets as long as possible. In the best case scenario, there was the possibility of a toy being added. The candy selection changed, so it was reasonable to assume that there was at least a possibility of a toy or some-such. In the worst case scenario, I would get the joy and excitement of a bunch of candy all at once.

I acquired a large number of tickets. The other kids showed no restraint and had few tickets. They were infuriated. They accused me of stealing their tickets. I already had an issue with bullying due to my logical mind and snarky-yet-flamboyant personality before this, but now their bullying was complete inanity. They should have developed object permanence by the first grade. They had no tickets because they used the tickets for candy. During a trip to the principal's office (I was in trouble because someone wrote "cat" on a piece of paper, see below) they stole my tickets. They did the very thing they accused me of doing, under the false justification that they were taking back what was theirs. Tu quoque doesn't have to be grounded in reality, it seems. It is also unfortunate that "taking back what I'm owed" is a common sentiment in the world.

The adults were atrocious. As an example: I think cats are absolutely adorable. My love of cats prompted the ire of the traditional, dog-loving boys. So, clearly, I was being anti-social. I was ordered to not only stop talking about cats, but also to not do anything cat-related. I actually followed this order. I decided to draw a picture of something that boys are supposed to like: a baseball game. However, a malicious student wrote "cat" on the back of the picture and told the teacher. I was sent to the principal's office and got yelled at over it. When I insisted I had not written "cat" on the back of the picture, I was assumed to be lying. I decided to hiss at the principal in retaliation and defiance. Apparently, though, hissing at people makes them think you're crazy. Amazingly, it seems to have been what got me out of the frying pan. Unfortunately, there's a saying about getting out of the frying pan.

Half-way through the first grade, I got bumped up to the second grade. I then had to go through two and a half years with the same violently malicious students and violently abusive teachers.

(will be continued later)