Hi Colin, great job gutting and rebuilding so quickly. I emailed my "sysop application" to Trent earlier. I only want to be one if it doesn't turn me into a dick jerk. Human 22:05, 21 May 2007 (CDT)

Do we just ask to be Sysops or is there some sort of application/requirement procecss? GodlessLiberal 16:40, 22 May 2007 (CDT)

I'd like to be a sysop here, so I can move pages. I wouldn't "block" anyone here, unless specifically granted authority to do so by unanimous consent of the bureaucrats. Anyway, you guys know I'm fair and wouldn't abuse any privileges. I just want to move pages, and maybe delete any nonsense pages I started by mistake. --Ed Poor 12:45, 24 May 2007 (CDT)

I think anyone can move pages here. It's a normal wiki function (that was disabled on CP, I believe). It lets an editor fix a typo'd title, etc. Of course, they'd have to ask a sysop to delete the redirect page. And I'm not saying you shouldn't be a sysop (although I'd like you to earn some trust here first ;)). Heck, the more hands on deck doing housekeeping the better! But, if you moved a page and fixed the links, deleting the redirect would not be hard work to finish the job. I'd better go to your page an dwelcome you, now! humanbe in 12:49, 24 May 2007 (CDT)

I don't know if this is really the best thing, it could bring a lot of bad carma considering my vandalistic tendencies at Conservapedia. With a vandal as a sysop it seems rather hard to claim the moral high ground. Do you think that might be a problem? -Icewedge 01:52, 22 May 2007 (CDT)

I wasn't laughing at the fact that there were entries for 96 counties, and nothing for other sates. Just the fact they were there with nothing in them. By ousting you CP cuts off its nose to despite its face. I notice BrianCo started pages for most of the state capitals. You'd have thought that a bunch of patriotic Americans would have had those bases covered pretty early on. No, as I commented about CPWebadmin - we need 16 more articles on abortion; or more stuff about Hitler and Jesus. What sort of family friendly encyclopedia are they trying to create?? Mad Min 09:37, 24 May 2007 (CDT)

ColinR, please remove my account. While I have tried to show good faith by unblocking Leopeodeo, Wikinterpreter, several others, it is obvious my account here will serve as nothing more than a place for others to bitch about my actions at some other board, with different rules and expectations of what sysops are supposed to do. No matter how I address that, someone always has another justification or argument as to how I should have done something differently, and obviously most users here still judge what is done on CP by their expectations of what they should or could be, rather than what they actually are.
Since I was told by at least two bureaucrats it wasn't going to be allowed to hold my feet to the fire for actions somewhere else, and that hasn't been enforced, or even mildly suggested it isn't right, the only solution I can think of is to resign, which makes my treatment here good (and perhaps justified) revenge for some. However them treating me the same as they claim to have been treated elsewhere, makes them what? Would you please consider removing my account? Thank you. --TK/MyTalk 20:37, 31 May 2007 (CDT) 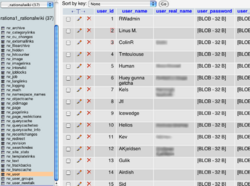 ...that your sainthood will probably be revoked...User:PalMD

We're sorry you left, so congratulations on your inevitable coming back, (Newcomer's name)!


In case you need reminding, the table of contents and guidelines still exist


Pull up another goat and have some more fun!
Any questions? Please see my talk page.

We mucked up your wiki while you were gone... human

Ten years... good to know that it wasn't any sort of mysterious disappearance that we'll never know about. I'll bet so much has changed that you basically need a {{welcome}} anyway :) —Kazitor, pending 05:05, 1 June 2018 (UTC)

Welcome Back!
Please see our guide for newcomers and our community standards.
Tell us how you found RationalWiki here!
If you are interested in contributing:
Read what our articles are intended to be
Check out the to-do list
See our help page and Wikipedia's formatting cheatsheet
If writing a new article, consider drafting it in your personal sandbox
And most importantly: Pull up a goat and have some fun!

Rise of the old guard[edit]