Welcome to the Dollhouse, friend from the lands of the north! human

You could very well be right. I just found it suspicious, adding crap AFTER the protection, and then continues nonstop after. I'll edit the entry if he scales it back. Hadn't realized he does the switcheroo to himself. Thanks, I'll keep an eye on it. NorsemanWassail! 21:45, 14 October 2007 (EDT)

I've been posting this elsewhere:
Btw did anyone notice that on cp: (America -> Go) redirects you straight to United States of America - no disambiquation or anything? Search though & all the Americas come up - Norseman gets #1 listing in page refs though (Viking). Susantalk to me 23:22, 14 October 2007 (EDT)

Do they know how to make disambiguations? I don't think I've seen one there at all. Would seem like a pretty important goat to ignore or forget. However, I'm too much a "wiki newbletist" to understand the page reference to Viking thing. I'm quite dense. :P NorsemanWassail! 00:58, 15 October 2007 (EDT)

I posted something on the talk, but wanted to ask you directly: I'd like to say that mead (like other alcohols) is a gift from whatever gods may or may not exist, not specifically the Norse ones (even though those are the ones I love most). Would that work for you? (I also moved the link to the Norse page, and fleshed it out a bit--let me know what you think.) Researcher 03:49, 22 October 2007 (EDT)

*Throws a tantrum* Gah! What was I thinking! I linked gods to Norse, thinking that the god article was meant for the three listed religions. Whoops! I'ma go change, good sirs.

I would be distilling spirits by now, if licenses were more forgiving on the wallet. I have some old equipment that's still usable when my grandfather was a rumrunner. Good times, good times... NorsemanWassail! 10:44, 22 October 2007 (EDT)

Under the heading of 'remarkable coincidences' I also dabble in brewing mead. I wrote a Fun:How_to_make_Mead page on my rough recipe. It didn't occur to me that rational wiki would already have a Mead article until after I wrote this and noticed Valhalla wasn't a red link. Jeeves 02:16, 29 October 2007 (EDT)

Holy crap, demijohns? You must have a lot of friends to share with. I stick to the gallon carboy, though I experiment with recipes mostly (I'm the only one drinking, too). Nice to know someone out there likes to dabble! NorsemanWassail! 21:20, 29 October 2007 (EDT)

There are flavors? News to me. I take interest in all of it - I like seeing what people come up with. Not sure on what I particularly take interest to. NorsemanWassail! 22:46, 29 October 2007 (EDT)

Thank you very much, miss Susan. Thanks to Icewedge and Ames as well for the cleanup. Sorry for the work, I shouldn't have put my hand in the fire. T_T NorsemanWassail! 13:18, 30 October 2007 (EDT)

I learn as I go along. I used to edit on Wikipedia before all the cool kids thought it was cool, but that was years and years ago. I know the simple "edit this, save that" concept, and somehow managed to make templates, but otherwise everything else is a mystery. I didn't even know how to nowiki links. I'm an under-achiever. :( NorsemanWassail! 19:37, 30 October 2007 (EDT)

btw, you can nowiki anything - it's usually used to show how some bit of wikicode is entered. human

Your recent addition (TerryH vs. Aggrieved) should have been an update to two WIGOs before. Just whining. ħuman

Yeah, sorry. I was planning on adding on to the already-too-long-but-it'd-still-fit (that's what she said) WIGO entry and just made a new one without thinking. By the time I saw what I hath done, it had been already voted on. >_< NorsemanWassail! 08:43, 15 June 2008 (EDT)
It was one of those things that my OCD kicked in and clouded my judgement. I'll do better next time. :D NorsemanWassail! 08:43, 15 June 2008 (EDT)

I might try to refine the GIF someday, the eyes have white dots surrounding it and part of Hypnotoad's face can be seen, but it works for nao. Thanks! :D

You own a horn? That's pretty cool. I've farted in many people's userspaces in the past, but this is the first time I've genuinely farted in real life when looking at someone's userspace. Anyway, a sword too! Very cool. I own Nunchakus. SJ Debaser 18:43, 3 July 2009 (UTC)

Yeah, it's non-descript, but I make drinking horns and scrimshaw to pass the time. I have a sword collection too, and it's all LOTR stuff. Nunchakus? T_T Do you know how to use 'em? I had 'em but my bawls were never the same since and got rid of 'em. Feel free to fart on my talk anytime good sir.

I have a Demolay (?) sword and belt. Sword bought locally, lovely matching belt found in Ohio. Favorite halloween outfit involves it. It's amazing how many places let you in with a deadly weapon on your hip... my SCA buds would at least do that thing where they tie up their knife/sword with a thong to project an image of "peace". ħuman

From my conglomerate to yours...[edit]

All the staff at McWicked Co. wish you a merry christmas.

To a certain Viking gentleman and a liberal webiste. In regards to a very important message you might or might not have left me somewhere on the internet, I have sent you a message in return. It might or might not be important. if your PC explodes, it was important. Ole! Ole! Ole!--PsygremlinParlez! 17:44, 7 January 2010 (UTC)

In a twist of irony, my computer DID die on me earlier today. Came out of standby, double-clicked on Firefox, and WHAM! Blue screen of death (STOP ERROR 0x00000050). Motherboard died. Only took me 15 minutes to transfer the useful hardware to my second CPU. But anyways...
TRANSMISSION RECEIVED. Operation thank-you will commence.
Thanks! :D

It's alright. It was 6 years old (bought it to play EQ1 with them new leet graphics), then played LOTRO for a bit on low graphics. It was getting to the end of its life anyway, and besides, this comp is top of the line. I guess the email WAS that important! :D

...is amazing. Randomly come across the quote, or have you watched every movie and every episode of the anime and read every page of every chapter of the manga? -- JArneal 21:03, 8 August 2010 (UTC)

Heard the quote from the episodes aired on Cartoon Network (years ago), but had to look up the script to get it word for word. Seen all the anime, most of the movies (I only watch what I own)... but I can't read the manga. I take Pristiq full dosage, and this crap destroys my short-term memory. I'll just forget what I read the next day. Should die down after continued usage, but GITS is one of my favorite. 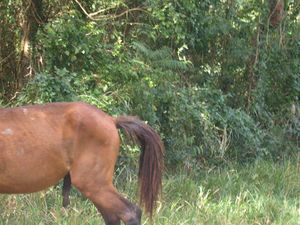 User:Nutty Roux has given you a pony dick. Pony dicks foster WikiLove. Friendship is magic! Won't you spread the love? For the ponies!

Aw yeah. It's flaccid, but it'll do. Pony Penis Power!

Red Telephone for you, sir[edit]

And he deleted that, too.