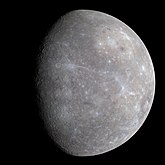 Mercury is the innermost and smallest of the nine eight planets of the Solar System after Pluto got demoted back in 2006. It receives its name from the messenger of the gods in the Roman mythos, borrowed from Hermes who had the same role in the Greek mythos.

The planet received that name because it moves relatively fast through the sky. Being the closest one to the Sun means it is pretty hard to see, as it does not go very far away from it — around 25 degrees at most — unless you know where to look, just for one or two hours either after sunset or before dawn. This explains why even some astronomers have been unable to spot it. It is less known in such regard than Venus, appearing as a conspicuous star but much dimmer than that planet. As noted below this explains why so little was known of it until the Space Age.

Mercury has no morning or evening star to speak of as there is no planet closer to the Sun. However its nights are adorned by a Venus that appears much brighter than as seen from Earth, as it appears at its closest as a full disk unlike the crescent offered to Earthlings, plus the dazzling blue star that is Earth, which while less bright than Venus is still comparable to our view of the latter, and comes with the Moon as a quite bright star.[1]

Mercury is small — 4.880 kilometers diameter (40% of Earth) — and smaller than the two largest moons of the solar system: Ganymede

and Titan. However it is much more dense, with a gravity comparable to Mars. This is thought to be caused by a very large iron-rich core, a much larger fraction of the planet than Earth's. Mercury is 70% metal, with the remainder rock (i.e., silicates).

Mercury is your standard airless planet, with no atmosphere to speak of, given its closeness to the Sun, the effects of the solar wind, and insufficient gravity to hold one for extensive periods. This translates to severe variations in temperature between day and night, with extremes going from 700K (427°C, 800°K) to 80K (-193°C, -315,4°F) but spacecraft have nevertheless found water ice at its poles, which makes it more friendly than Venus.

Like the Moon, Mercury is also heavily cratered, with craters of all sizes overlapping older ones (the largest one — the Caloris basin

— is more than 1500 kilometers), mixed in with smoother plains probably of volcanic origin, plus large rips and scarps thought to be the result of Mercury contracting after formation. The planet seems to be geologically dead in these times.

Mercury's orbit has the greatest eccentricity (0.2056, cf. Earth 0.017) of all the planets in the Solar System. Most notably, it cannot be accurately predicted using the laws of mechanics derived by Newton and it wasn't until Einstein's general relativity, which explains gravity as distortions in spacetime, that the orbit could be predicted accurately. Scientists had previously attributed this to a partially-molten core.

Mercury's closeness to the Sun means that little was known before it was possible to send spacecraft there, as it is hard to see with a telescope — little more than a blob due to atmospheric turbulence close to the horizon — and there is so little time to observe it before it sets or is drowned in daylight. Despite that and with a lot of patience, maps like this one were made. ("Solitudo" is Latin for "desert", appropriate given its hot climate.) One surprise brought by radar observations in 1965 was that the planet is not tidally locked to the Sun, with one side permanently in daylight and the other in darkness, but instead completes three orbits per two rotations.

, both from NASA. It is very difficult to go there as you cannot simply hurl the probe towards the Sun and let Mercury catch it when the former is close to the latter. One must first cancel a whole lot of kinetic energy to reach its orbit around the sun, then spend even more fuel to brake into orbit around it as it lacks an atmosphere so aerobraking is not available. (It is said, in fact, that it is easier to abandon the Solar System than going there.) These probes have allowed us to know more than diameter and orbit. A third one, the European-Japanese BepiColombo

The planet at the other Wiki