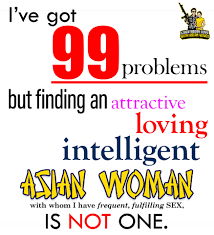 Yes, this is not a Poe.[1]
Not to be confused with the viral disease of the same name

that is spread by mosquitoes.

Yellow fever is associated with the extreme right wing male chauvinism and the alt-right. Notable far right figures including Andrew Anglin, Alex Linder, Richard Spencer, and Mike Cernovich have or had Asian partners, while Dylan Roof included Asians as an exception to his hatred of nonwhite people because he believes they are racist too.[2] The far right's fascination with East Asians goes back to racist pseudoscience, in fact, the Nazis considered Chinese and Japanese people to be "honorary Aryans",[3] which naturally led to Nazi Germany allying with Japan.

Additionally, there's a cultural stereotype on East Asian women that they are passive, subservient, conforming, and willing to "integrate" into "white" culture. While Asian cultures do follow a collectivist philosophy that emphasizes conformity and harmony to promote group well-being, those two traits are only very general ideas and do not blanket apply to a culture much less individual personalities. After all, the equivalent would be others characterizing "west" culture as everyone pursuing only in self-interest, and cooperation is an alien concept. Nevertheless Asian women are stereotyped as being overly modest and docile as well as having a petite build,[4] which are perfect stereotypes for the aforementioned men. However, there aren't clear explanations for why Asian partners, who have full agency with their actions, accepted engaging with the aforementioned far-right figures, especially when Spencer's ex-girlfriend knew Spencer's white supremacist leanings.

There is a perception among the far-right men that East Asia is also somehow unaffected by the so-called scourges of feminism. This is despite a version of feminism growing in East Asia[5] such as China[6], being intertwined with the protest of communism's promotion of strict traditional gender roles. In the Unites States, Asian-American women have condemned the fetishization of women at the Women's March.[7]

Thinking that Asian people are part of a so-called "model minority" also plays a part in the yellow fever culture, because they think Asian women adapt to white society by example.