200 Evidence-Based Reasons NOT To Vaccinate 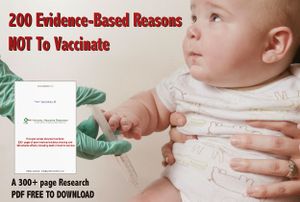 Think of the children!

200 Evidence-Based Reasons NOT To Vaccinate is a notorious, 200-example-long proof by verbosity of cherry-picked and blatantly misrepresented study abstracts, all in the preconceived attempt to simply arrive at the conclusion that vaccination is supposedly bad.[1] 200 Reasons has been promoted heavily across the various fringes and quack watering holes of the Internet, not least through the many reposts of the list by its crank author, Sayer Ji.[2][3][4][5][6][7][8][9][10]

200 Reasons contains very little context for each of the 200 "reasons", which are all shrunken down to a bias statement using scientific-sounding language, a hyperlink to the article, and information about the authors, publishers, etc. of the article - that is to say, to the average reader of this list, pure padding meant to make it look less shoehorned and more representative of research than it actually is.

None of the reasons given provide any meaningful analysis or context, reducing the list to nothing more than a really long and really tedious Gish gallop, most probably constructed via the renowned research method of typing in the search terms "vaccine" + "[scary word]" into Google Scholar[11] and cherrypicking to your blackened heart's content.

And to anyone reading the .pdf itself (available at the bottom of this page), notice how it almost always says "- GMI Summary" (especially by the most scary sounding "reasons"). That is quack rhetoric for "this isn't what the study says at all", and clicking the link demonstrates this without fail.

Ji's description of 200 Reasons on GreenMedInfo starts with:[1]

The media, your pediatrician, politicians and health authorities like the CDC and FDA claim that vaccines are safe and effective.

This seems like a good place to start -- when a scientific field near-unanimously agrees that something is true, it's a good bet that it is. However, Ji continues:[1]

So why do hundreds of peer-reviewed studies indicate the opposite is true? Read, download, and share this document widely to provide the necessary evidence-based counterbalance to the pro-vaccination propaganda that has globally infected popular consciousness and discussion like an intractable disease. [....] This is the literature that the media, politicians and governmental health organizations like the CDC, pretend with abject dishonesty does not exist – as if vaccine injury did not happen, despite the over 3 billion dollars our government has paid out to vaccine injured through the National Vaccine Injury Compensation Fund since it was inaugurated in 1986.

Ji manages to create both a straw man -- that health organizations claim vaccines are completely (rather than almost always) safe -- and a conspiracy theory -- that the opposing literature has been purposely ignored or even censored.

200 Reasons is similar to a metastudy, in that it reports on the research in a field.

Unlike most metastudies, 200 Reasons makes no conclusions or even in-depth analysis of research. Instead, it's really just a list of studies Ji could find that (if seen in the right light) make vaccines look bad.

However, Ji never gives you a breakdown of which are used in any given case, and the math often doesn't add up.[12] Ultimately, the "cumulative knowledge" is poorly defined and poorly arrived at, suggesting that the real goal is appearing impressive.

Responding to all 200 reasons would take an inordinate amount of time and effort. However, the first 10 reasons (presented below) are fairly representative of the quality of each of the reasons.