Nice map.
Is that a satanic cross?
Vermont 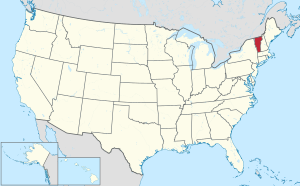 Surpisingly enough, not a ton of people live in Vermont, making it kind of a backwater.

Vermont, the Green Mountain StateTM, is sometimes a part of the United States, and sometimes a rebellious independent country.[note 1] It is a part of New England, bordering its less pretty twin sister New Hampshire along with the flatlanders of Massachusetts and trustafarians of New York. Quebec also borders Vermont to the North, leading to speculation that they might both split off together from their respective countries and become one of their own.

Vermont is one of four states (the others are California, Texas, and Hawaii) which was an independent sovereign nation prior to its statehood, albeit one with limited recognition and functionality. Technically there's a fifth, Utah, but it was actually at war with the rest of the US before joining, it doesn't count. During its alleged period of independence, Vermont was known as "the reluctant republic" because popular sentiment strongly supported joining the Union. It maintained no foreign relations, issued a local currency not unlike others in the Continental United States, made three applications for admission as a state (1777, 1783 and 1791), and finally succeeded in becoming a state when it paid a bill it owed to New York. Its militia, the Green Mountain Boys, remained on the payroll of the Continental Army throughout the Revolutionary War with payments managed by, yup, New York. Such an arrangement today might have been called inde-meh-dent.

Vermont was strongly Republican for most of its history, with strong religious and abolitionist tendencies, it was the first state in the union to explicitly abolish slavery, earning it extra animosity from Confederate troops during the American Civil War; it was one of only two states (Maine is the other) to vote against Franklin D. Roosevelt in all four of his presidential campaigns. [1] In addition, it is one of two states (the other being Utah) to vote for William Howard Taft in 1912. In the modern era, however, Vermont is strongly Democratic in national elections, with local elections spiced up by the presence of a strong third party, the Vermont Progressive Party. It is the progressive yin to New Hampshire's libertarian yang. Incidentally, the way to tell the difference between Vermont and New Hampshire is Vermont is shaped like a V.

Like some other states (particularly Colorado and Nevada), a large percentage of Vermont's population was born out of state. There is a strong cultural divide between native-born Vermonters (mostly rural and blue-collar) and "flatlanders" (hippies and retirees from New York and Boston).

In a show of wild imaginative creativity, the state's nickname is pretty much a translation of its real name.

Despite its unusually high birth rate of founders of Mormonism the proportion of Vermont people without strong religious beliefs is higher than in the United States generally. [2]

Challenger McMillions, er, McMullen answered, "Six." The answer was four. McMullen went on to lose the primary to Tuttle the farmer who then endorsed Sen. Leahy for reelection.[7]