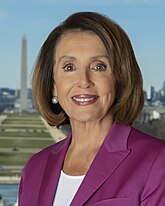 Nancy Pelosi became Speaker of the House once more after her party won a majority in the chamber.

The 2018 midterm elections were a series of local, state, and federal elections held in the United States on 6 November 2018. These included elections for all 435 members of the US House of Representatives, 35 US Senators, 39 state and territorial governorships, and the majority of state legislative seats.

The 2018 Midterms have been widely described as a “blue wave” on account of the major gains made by the Democratic Party. Notably, Democrats won 40 net seats in the House of Representatives, giving the party control of the chamber.[1] At the state level, Democrats took full control of the governments of Colorado,[2] New Mexico,[3] Illinois,[4] Maine,[5] New York,[6] and Nevada. Democrats also won governors' races in Kansas,[7] Michigan,[8] and Wisconsin[9] while flipping both houses of the New Hampshire state legislature,[10] thereby breaking Republicans’ full control over those states’ governments. Republicans had more success in the Senate, where Democrats were defending the vast majority (26 out of 35) of the seats up for election. [11] Republicans expanded their majority by flipping Democratic-held seats in Florida, Missouri, Indiana, and North Dakota. Democrats tempered GOP gains by flipping Republican-held seats in Arizona and Nevada.[12]

As always with midterm elections, most people saw the 2018 Midterms as something of a referendum on the presidency, or rather the dumpster fire, of presidency of Donald Trump. Given that the GOP generally did badly, most pundits have concluded that this meant most voters didn’t approve of Trump. Trump, however, apparently learned the opposite lesson. Inspired by Republicans’ modest gains in the Senate, he doubled down on his most absurd policies and rhetoric, notably by shutting down the federal government as leverage to get funding for a border wall. Republicans largely continued to support Trump, apparently having learned nothing from their midterm shellacking. However, Kansas maintained supermajorities, making it very hard for Democrats to veto bills. In turn, they gained supermajorities in both chambers in Maryland and Vermont, allowing Democrats to override Republican vetoes.[13][14] However, in Vermont, the supermajority would go away due to slight Republican gains in 2020.[15]

In the two years between Donald Trump’s election and the 2018 midterms, there were numerous special and off-year elections for positions throughout the United States. Democrats generally did well in these elections, portending serious trouble for the GOP. Democrats won notably in:

In addition to election results, polls also suggested Republicans were in for a rough midterm cycle. FiveThirtyEight predicted that Democrats were likely to win between 36 and 39 seats in the House of Representatives,[30] with similarly bullish predictions from The Economist[31] and CNN.[32] 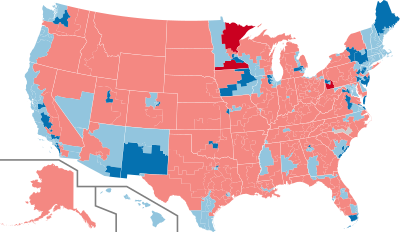 US House results by party: dark colors are gains, light colors are holds.

Democrats flipped 44 Republican-held seats in the US House of Representatives, while Republicans only won three Democratic-held seats. Democrats only needed to net 23 seats in order to take control of the chamber,[33] which Republicans had held since the 2010 midterms. The Democrats’ most notable achievements include victories in:

As of 22 January 2019, one House district was undecided: North Carolina’s 9th congressional district, based in the Charlotte suburbs. It initially appeared to have narrowly elected Republican Mark Harris (it had been GOP since 1962), but these results were thrown into question after evidence of election fraud surfaced.[49] A special election was called, pitting Democrat Dan McCready against Republican Dan Bishop,[50] and Bishop won the election on September 10, 2019.[51]

US Senate results by party: dark colors are gains (except in Vermont and Maine, where they are holds respectively for Bernie Sanders and Angus King, independent senators who caucus with the Democrats), light colors are holds.

Whereas Democrats gained ground in the House, they lost it in the Senate, where Republicans won two net seats.[52] This was largely due to the fact that Democrats were defending 26 of the 35 Senate seats up for election that year, including five seats in deep-red states and 10 more in swing states. The following six Senate seats changed hands between parties:

Another noteworthy election occurred in Texas, where Democrat Beto O'Rourke challenged one-term Republican incumbent Ted Cruz. While O’Rourke lost, he came within three percentage points of unseating Cruz, suggesting that Texas may be shifting from red to purple.[68]

Although the Senate results were considered a disappointment for Democrats, it’s worth emphasizing how difficult a position the party was in. Democrats were defending the vast majority of seats on the table, and in a less blue year, they would likely have lost far more. Democrats narrowly held on to Senate seats in Montana[69] and West Virginia,[70] two states that are usually raspberry red these days; they also held, by comfortable margins, seats they held from New Mexico, Minnesota, Wisconsin, Michigan, Ohio, Virginia, Pennsylvania, and Maine, all swing states that would ordinarily be competitive. Netting two seats, then, was no great victory for Republicans. So bad, in fact, it allowed Democrats to narrowly take back the Senate in 2020, when all they did was flip 3 seats. 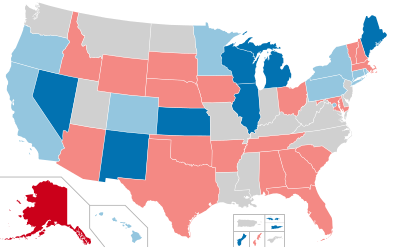 Republicans did not flip a single Democrat-held governorship in this election. However, Republican Mike Dunleavy was elected Governor of Alaska.[74] Dunleavy replaces Bill Walker, an independent who was generally considered closer to the Democratic Party, at least by Alaskan standards.

Although Democrats generally performed well in governors’ races, they did lose several high-profile contests. Notably, progressive Democrat Stacey Abrams narrowly lost her bid to become Governor of Georgia,[75] though she did come closer to victory than any Democrat since 1998. In Florida, progressive Democrat Andrew Gillum narrowly lost despite having led in the vast majority of the polls.[76] Democrats also lost close races in Ohio,[77] Iowa,[78] and South Dakota.[79]

Weirdly, Republicans easily won governors’ races in the deep-blue states of Vermont, Massachusetts, and Maryland. The Republican candidates in question (Phil Scott, Charlie Baker, and Larry Hogan respectively) all have moderate to liberal policy records, and have publicly opposed Donald Trump. Democrats also gained or already had supermajorities in all three states’ legislatures, limiting the governors’ power to challenge Democratic priorities, with Massachusetts having one before, and Maryland and Vermont gaining one. However, Vermont's supermajority in the Vermont House of Representatives narrowly got erased in 2020, making it easier for Phil Scott to veto bills.

In addition to House, Senate, and governors’ races, Democrats achieved success in:

In response to this midterm drubbing, Republicans doubled down on what they were doing before. Republicans’ most notable statements and actions during the months following the midterms include:

Overall, neither Trump nor his allies in Congress and state governments showed any sign of moderation in response to the 2018 midterms. If anything, the GOP only became more extreme, with potentially disastrous consequences for American governance.

In the months following the election, Republicans came up with a number of talking points to downplay the significance of the midterm results. Typically followed by statements like "2018 wasn't a wave," these claims include: