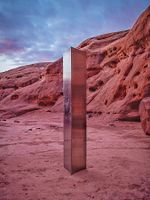 The original 'Utah monolith' that started it all was discovered in November 2020 and removed by four unknown men (possibly Men in Black or Reptilians in disguise).

Late 2020, as if the year couldn't get any stranger, saw the appearance and disappearance of numerous monolith sculptures, all similar in appearance, in several different locations around the world. Initially confined to a few states in the US, people later reported seeing some pop up in foreign countries, like Romania and the UK.

To the surprise of absolutely no one, claims with varying degrees of invalidity and a shitload of conspiracy theories hit the internet the minute the images and reports surfaced. This article aims to keep track of these sightings, and to explain how (sorry, conspiracy theorists) they were almost certainly not put there by God, aliens, or whatever other else you may fancy, and are instead likely to be either artwork or PR stunts by the dumbest "civilization" that ever existed in the galaxy, that can barely even protect itself from diseases regular old human beings.

In the US of A[edit]

Initially, the majority of the structures were sighted in UFO Mecca the United States, for reasons obvious to any patriotic citizen. Below is a list of the reported sightings. 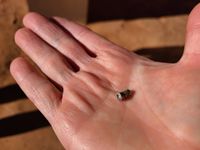 Mysterious alien device which appears to be used for connecting sheets of metal..

The first of many,[1] the metal sculpture, pictured at the top of this article, was found in an undisclosed location in Southeastern Utah (which barely anyone lives in) on November 18th[1] by state employees in a helicopter as they were surveying flocks of sheep.[2] The steel structure was somewhere between 10ft and 12ft (approx. 3 meters) in height, and appeared to have been planted into the ground where it stood. Despite there being obvious indications of the structure being man-made (namely the fact that it was formed of rectangular aluminum panels held together by rivets,[3][4] indicating a lack of divine influence or advanced extraterrestrial technology), various conspiracy theories floated around on social media about the cause of its origin and disappearance- and even more were spawned by the monolith's seemingly sudden disappearance[5] on November 27th.[1] Among those who seemed to suggest that aliens could have put it there since nobody knew exactly how it appeared or disappeared was the county sheriff's office, which posted on Karen Central Facebook:

It was soon revealed by Utah residents who admitted to being part of the lineup that the monolith was removed out of concern for the land.[1]

It all gets weirder still. On December 2nd,[1] a second, similar monolith was found on a hiking trail in Atascadero, Southern California,[7] also of unknown origin.[8] However, unlike the last one, this one was placed at the top of Pine Mountain- not in the middle of a desert that barely anyone lives in. It appeared to be of similar dimensions and design, but its base was more wobbly than the original in Utah.[9] It also disappeared like the last one- albeit this one was replaced with a wooden cross. This less-expertly crafted base strongly suggests that this monolith was also man-made- along with the fact that an adventure photographer named Ross Bernards, who had just been photographing the sculpture late one evening, posted the following in an Instagram post:

Even if Bernards was lying to distract everyone from the REAL cause of the monolith's disappearance not telling the truth, it would still be unlikely all the same that any advanced alien species would build such a flimsy base. Even considering how well made the base of the original was, why would they need to be so cryptic in their attempts to contact us?

As of December 6th, four California artists revealed that it was they who had constructed the Atascadero monument. They built the 200-pound monolith as a piece of "guerilla art", inspired by Stanley Kubrick and Arthur C. Clarke's film 2001: A Space Odyssey, and carried it up the mountain on December 1st.[11][12]

On December 5, another monolith was found in California; this time in the Joshua Tree National Park, in the Wildfire Alley more arid parts of the state. It was then that a group finally claimed responsibility for the structures: A group of artists called the Most Famous Artist, based in Santa Fe, New Mexico. They posted to Instagram a picture of the original monolith in the Utah desert, captioned with a description of the sculpture and a price tag of $45,000 US dollars. When a commenter asked "Was it you?", they replied, "if by you you mean us, yes."[13] The group's founder also suggested his group made the original monolith on Mashable, where he said:

According to TMFA's Instagram, they also made this second California monolith as well.

Well, there you have it then: If these artists are to be believed, these monoliths really are man-made; nothing goddy or alienish about it.

Another metal monolith was spotted on Dec 5th in Los Padres National Forest, located in San Luis Obispo County (the same county as Atascadero). On top, this one had an iamge of a red UFO beaming up a person, warning "Caution".[12]

Yet another monolith appeared in Santa Clarita, California- at around the same time that the Joshua Tree National Park one appeared, on either December 5 or December 6.[1] This one appeared to have vanished even more suddenly than all of the previous ones- but not before attracting a lot of attention. Mere minutes after it was first found, a crowd of some fifty to sixty curious observers gathered around the monolith,[14] including a few small children who felt afraid to go near the structure- presumably because they thought that aliens might have put it there.[citation NOT needed]

This monolith differed from all of the previous ones, in that it included an LED light that would have illuminated it at nighttime.[14]

When the sculpture disappeared, it was replaced with something really strange: A rock that bore the following message: 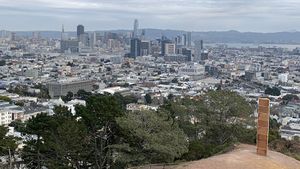 The festive candy monolith. These aliens sure do know their human culture quite damn well, since they clearly know how to bake gingerbread...

On December 25, a monolith made of gingerbread held together with white cake icing appeared at Corona Heights Park in San Francisco, adorned with gumdrops and icing.[1][15] Our guess is that the aliens felt like showing off their culinary prowess. Either these aliens have read up on their human cookie recipes pretty damn well, or at this point the monolith trend has just become a running gag...

A three-sided metal monolith appeared in the Strip District neighborhood of Pittsburgh, Pennsylvania, in front of a candy shop on December 4th. The owner of the shop admitted to creating the monolith to attract business. It appeared to have been stolen by aliens overnight between December 5th and 6th.[16]

Texas' three sided monolith was sighted on December 8th in El Paso, across the street from a pizza restaurant. Several hours later, a social media video showed a group of people pulling the structure from the ground, putting it in a truck, and leaving. Dicks. Can't they just make their own?[18]

Another metal monument was first noticed December 12th about 1,800 feet up a mountain in Pittsfield, Vermont.[19] Oddly enough, while the monolith reportedly was taken back by the aliens disappeared like all others before it on the 22nd, it appeared to have returned on the 24th.[20]

Another ten-foot-tall metal monolith was sighted at a park in Ithaca, New York. Sounds like the aliens wanted to pay tribute to Carl Sagan... Initially, geographic coordinates were on one side, but those oddly disappeared by December 17.[21]

A monolith appeared in Fort Pierce, Florida, on December 27th, 2020.[22] It even has its own Facebook page, where people post pictures of themselves visiting the monolith without wearing a mask, in the typical Floridian "dOn'T sTeP oN mUh FrEeWdUm" manner.[23] What a treat!

, northern Romania on November 28th.[1] The mayor of the city appeared to welcome the monolith,[24] which was nine feet tall and triangular, similar to its Utah counterpart. Upon inspection, it appeared to be made by a "bad local welder". It disappeared on December 1st.[25]

There was a monolith discovered outside Liebegg Castle

Another monolith similar to the Romania one was spotted on a beach on the Isle of Wight, just off the southern coast of England, on December 6th. This one was very reflective, and quickly attracted a crowd of spectators after its discovery.[26] 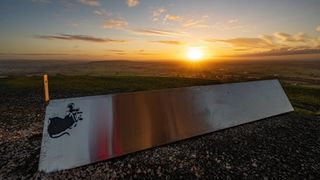 A few days later, on December 8th, a monolith was found in Glastonbury Tor, a hill with links to King Arthur, near the town of that name in southwestern England. Oddly enough, the sculpture was discovered lying horizontally[note 2] and, unlike the others that came before it, features stencil work, featuring what appears to be a drawing of a mouse on a background spray-painted orange and red, similar to the art of British street-based artist and political activist Banksy

- however, the words "Not Banksy" are stenciled on the side, indicating that the monolith's creator is likely not him and instead aliens who were stopping by for tea and crumpets at 4:30 PM.[27]