From RationalWiki
Jump to navigation Jump to search
New Mexico 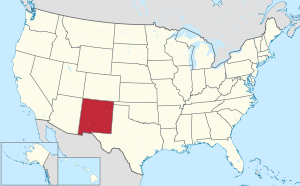 This square might not be Mexico, but it definitely has the same climate.

Nice map.
Is that a Satanic cross?

New Mexico is one of several states in the southwestern United States that were formed from territory taken from Mexico after the US won a war[note 1] which Mexico started in response to the US's annexation of the Republic of Texas (or, so, we started it maybe?). Smaller parts of New Mexico were purchased from Mexico later when the US really wanted the land for one reason or another.[note 2]

Since New Mexico claims to be "The Land of Enchantment", you are advised to stay away, far away, from this obvious den of Satanism and baby's blood drinking rituals. Also, New Mexico is pretty much full of a bunch of Mexicans who insist that they're American citizens even though they speak Spanish. This notion is largely the result of the little known and less understood phenomenon of them not actually crossing the border into the United States, but having the border cross them, as it were. However, U.S. Highway 666 was changed in 2003 to Highway 491 so at least some of this Satanic influence is finally being undone.

Some serious stuff, about culture and immigration[edit]

With Arizona, Texas, and even Alabama writing laws that all but make it illegal to be Hispanic (even for people who have lived on those lands for generations), New Mexico took an entirely different approach to their Hispanic citizens. They embraced them and their culture. New Mexico is the only state where two languages are spoken widely, with two de facto official languages, English and a unique dialect

of Spanish, as well as two widely spoken native languages, Hopi and Navajo, as well as several Pueblo languages. Children are exposed widely to Spanish on a regular basis, regardless of their ethnic heritage. They see themselves as what they are: a Mexican-American state.

In a very real sense, this has made a huge difference in the way they deal with immigration issues and both legal and illegal immigrants. They do not see illegal immigration as "the single biggest social issue" because they do not see it as a political issue. They see it for what it is: an economic reality that has both positive and negative aspects which must be addressed. Their jails are not full of "illegals", but rather real criminals. Their public health care systems and education systems are flooded with undocumented workers, but this is because New Mexico has pushed to help people stay healthy and educated, regardless of their backgrounds. They also issue real valid and legal identification and driver's licenses to undocumented foreign nationals, knowing, what seems to be missed elsewhere in the nation, that those undocumented workers still pay taxes and still add to the overall economy.

Sadly, it is the poorest state outside of the Deep South, with much of the Hispanic and Native populations living in poverty and ranking 2nd in terms of child poverty.[3] 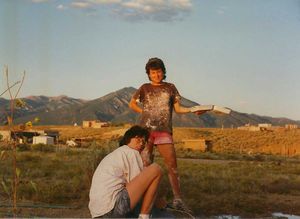 New Mexico and Texas: a case study in neighborly rivalry[edit]

New Mexicans tend to hate Texans. Nobody is quite sure why. However it is likely related to the fact that the Republic of Texas (Remember the Alamo and all that) invaded New Mexico. Eventually the US Congress paid Texas $10,000,000 to back off,[4] starting a long history of giving Texans massive amounts of money for doing nothing.

During the US Civil War Confederate troops (Texans to a man) invaded New Mexico. The WPA Guide to New Mexico picks the story up at this point.

When the conflict began, numerous resignations and desertions from the Union Army in New Mexico took place, the men joining the Southern forces. However, when the first Southern advance came from Texas into New Mexico popular feeling went to the Union as the long standing controversy with Texas had bred much ill feeling and Texans were extremely unpopular with the average New Mexican........ (NM) Governor Connelly issued a proclamation September 9 calling for volunteers to resist invasion, 'From the armed forces of the State of Texas,' the Confederacy not being mentioned."'[5]

Statehood for New Mexico did not end the Texan invasion, and the advent of the Giant SUV era brought yet another wave of Texans who seemed to feel that the overabundance of oil- and blood-soaked dollars they possess means that everything in New Mexico is for sale. Certainly respect, being liked, and frequently the so-called "common courtesy", are not. Frankly, their accents do not help.