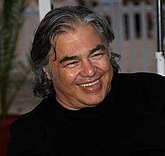 Russo at the Cannes Film Festival in 2006

Aaron Russo (1943–2007) was a Jewish[1]:238 American filmmaker, political activist, tax evader and charlatan. To the outside world, Russo was probably best known for producing the comedy classic Trading Places, The Rose, a movie starring Bette Midler that was loosely based on the life of Janis Joplin, and a number of other films in the 1980s. However, in later years online conspiracy cranks became fond of him, due in part to his shockingly bad income tax denial "documentary" America: Freedom to Fascism.

Russo became involved in politics in the mid-1990s. In 1994, he wrote the platform for the Constitution Party, which included "the elimination of prosecution of 'victimless crimes,' the reinstatement of 'sound money', and the curtailment of the IRS, along with positions against public school entitlement programs, national health care, and the UN."[1]:239

In January 2004, Russo declared his candidacy for the President of the United States, initially as an independent but then for the Libertarian Party, leading to a nasty primary battle between Aaron Russo and Gary Nolan. The nomination wound up going to one of the also-rans, Michael Badnarik, after he caught the convention off-guard with a rousing speech shifting much support in his direction. Nolan was more eager to stop Russo from getting the nomination than to secure it for himself, and so he released his delegates to vote for Badnarik.

Long before his political activism, Russo demonstrated his masterful judgment by responding to a rough cut of Dirty Dancing as follows: "Burn the negative and collect the insurance."

In 1996, with his career in Hollywood largely burned out, Russo produced and starred in the schlockumentary Mad As Hell. Russo spent an hour and a half preaching about the evil of the federal guvmint, criticizing the North American Free Trade Agreement, the War on Drugs, ID cards, and government regulation of alternative medicine. Given that it's essentially a ninety-minute advertisement for Ron Paul, it should come as no surprise that Russo effusively endorsed Paul's 2008 presidential campaign.[2]

In July 2006, Russo released another schlockumentary entitled America: Freedom to Fascism. Whilst the rise of rampant corporatism in supposedly-democratic Western societies and the entire concept of the military-industrial complex should be of concern to anyone with moderate intelligence, Russo barely tackles either issue in the film, choosing instead to dedicate his filmic farrago to highlighting just how inhumane and illegal income tax is, and how the creation of the the Fed is going to ultimately lead to Orwellian levels of intrusion into people's lives, the establishment of martial law and us all having RFID chips implanted in our fingers. Any time now.

As with many conspiracy schlockumentaries, the film contains a shocking amount of errors, distortions, duplicity, and outright falsehoods… which have naturally been hungrily lapped up by cretins on the internet ever since. Scott Moore, in his review of the film for the Portland Mercury, prophetically stated upon viewing the film that "there are a lot of stupid people in this world, and some of those stupid people are going to see America: From Freedom to Fascism and buy into its half-baked, hole-ridden, libertarian rhetoric about the alleged illegality of the federal income tax. And that's a shame, if for no other reason than it'll be a small defeat for logic".[3]

In an interview with Alex Jones shortly before his death, Russo made the claim that a "Nicholas Rockefeller", who may or may not exist,[4] had told him 11 months prior to 9/11 that there was going to be an "event", which would lead to the invasion of Afghanistan, the invasion of Iraq, and the attempted coup d'etat in Venezuela, amongst other things.[5]

Where to start? The ridiculousness of "Rockefeller" detailing almost every inch of the elite's evil plans for global enslavement and domination to someone whose political positions were, apparently, diametrically opposed to his own? Russo not only said not a word to anyone about these impending tyrannical machinations for nearly a year prior to 9/11 but for nearly 6 years afterward? Nick Rockefeller, being a fairly irrelevant lawyer who mainly works in China, being party to this information and freely splashing it around to people who don't share his alleged vision? Well, if there's anyone who will believe something that stupid, it's Alex Jones.

Aaron Russo died on August 24, 2007, after a 6-year struggle with bladder cancer. Naturally, having been embraced by the lunatic fringe in the years immediately prior to his death, Russo's death had absolutely nothing to do with being a heavy smoker from an early age and everything to do with the New World Order/Rockefellers/Powers That Be needing to shut him up quick for blowing the lid on their operation. When he died, he owed taxes to the IRS in three states, totalling $2 million in tax liens.[6][7]