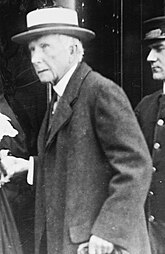 Rockefeller conspiracy theories constitute a range of bizarre claims about the enormously rich and often powerful Rockefeller family. The Rockefellers made their money in oil in the late 19th century, primarily through Standard Oil (later a part of ExxonMobil, trading under brands such as Esso). Standard Oil was incorporated in Ohio in 1870, moving to New York in 1883. The Rockefellers rapidly established a huge monopolistic oil company. In 1911 the oil company was broken up under anti-trust legislation, but the Rockefellers retained a large share and continued to profit.

In their heyday early in the 20th century, John D. Rockefeller, Sr. was the richest man in the world, and his brother William wasn't far behind. Their other business interests included the Chase Manhattan Bank and the Rockefeller Center in New York (of 30 Rock fame and a nice view). Later they became involved in politics, mainly as moderate Republicans (their side of the party is still often known as Rockefeller Republicans). Nelson was governor of New York and vice president; his nephew Jay was a Democrat.[1][2] They've faded a little since their peak: in 2015 the family's total wealth was estimated at $10bn.[3]

Rockefellers occur in a wide variety of conspiracy theories, sometimes alongside other families such as the Rothschilds, supposedly involved in a variety of organisations pressing for world government, total control over the world's financial system, etc. They're also responsible for the Zika virus, are stopping you realising the wonders of alternative medicine, have something to do with the Kennedy assassination and 9/11, and much more.

John Davison Rockefeller, Sr. (1839-1937), co-founded Standard Oil with his brother William; his peak net worth in 1913 was $900 million dollars, and adjusted for inflation in 2020 dollars is a whopping $423 billion, making him the richest person in modern history.[4] He had a lot of sons.

John D. Rockefeller, Jr. (1874-1960), son of John D. Rockefeller, Sr. He built Rockefeller Center in New York City at the start of the Great Depression when everyone else was cancelling developments. He owned the coal mine in Ludlow, Colorado that was scene of the Ludlow Massacre

. In 1901 he married the daughter of Senator Nelson Aldrich, chief architect of the Federal Reserve System.

Nelson Rockefeller (1908-1979), son of John D. Rockefeller, Jr. He was a moderate Republican politician; vice president under Gerald Ford; his divorce and remarriage in 1963 was a scandal at the time.[3]

David Rockefeller (1915-2017), son of John D. Rockefeller, Jr. He was boss of Chase Manhattan Bank, and founder of Trilateral Commission, very long-lived; in 2015 his wealth was estimated at $3.2 billion.[3] He was a friend of Henry Kissinger and advocated for the Shah of Iran to come to the US after the Iranian Revolution.[3]

Jay Rockefeller (John D. IV; b. 1937), son of John D. Rockefeller III. Was a Senator for West Virginia until 2015, the only Democrat in the family.

The Rockefellers have long been associated with the idea of a secret world government, New World Order, or One World Order, through institutions such as the Trilateral Commission, which was founded by David Rockefeller to facilitate international economic cooperation and having lots of fancy foreign conferences. Other secretive institutions like the Bilderberg Group are often implicated.[5]

One of the first conspiracy theorists was Emanuel Josephson in Rockefeller: "Internationalist": The Man Who Misrules The World in 1952.[2] Gary Allen's 1976 book The Rockefeller File is a detailed attack on the family and their supposed internationalist conspiracy.[6] He accuses the Rockefellers of manipulating tax law so they can donate money to trusts and avoid tax but retain control over it.[6]

They are also accused of being part of a Roman Catholic conspiracy against American Protestantism and freedom of religion, being supposedly the descendants of the Jesuit Roggenfelder family who fled Germany in one of the country's periodic outbursts of anti-Catholicism.[7] This is despite the fact that most sources say William Sr. and his family were Protestant.[1] But theorists like to claim the Rockefellers lied about their religion.[7]

In 2015, David light-heartedly confirmed the conspiracy theories, saying he had indeed been working for increased international cooperation all his life.[3]

They supposedly control American money through the Federal Reserve.[7] In particular, they are in conspiracy with the Rothschild family (Evil Jewish bankers), Warburgs, Goldman Sachs, Lehmans, Kuhn Loeb, and other international financiers.[8]

The facts are these. In 1908 following various financial crises, Congress passed the Aldrich-Vreeland Act to examine banking, and Senate Republican leader Nelson Aldrich led the inquiry, meeting with representatives of prominent banks including J P Morgan, National City Bank of New York, and Kuhn Loeb & Co. The National City Bank of New York in particular was closely linked to the Rockefellers, but the Rockefellers also did a lot of business with J P Morgan (which also funded Cornelius Vanderbilt's New York Central Railroad), and John D. Rockefeller Jr was married to Aldrich's daughter Abigail. Aldrich's inquiry led to the Federal Reserve Act of 1913 and the subsequent establishment of regional Federal Reserve banks, of which the Federal Reserve Bank of New York was most powerful. The Rockefellers were also major shareholders of the Equitable Trust Company, which merged with Chase National Bank in 1930. Everything was quite closely interrelated.

Conspiracy theorist also point to the role of the Rockefellers in the Bank for International Settlements in Basel, Switzerland, which was initially founded to handle Germany's World War I reparations, but now "fosters international monetary and financial cooperation and serves as a bank for central banks"[9][10]. Gates McGarrah formerly of Chase Manhattan/Chase National Bank and the Federal Reserve was its first President. By the way, McGarrah's grandson Richard McGarrah Helms was a senior official at the CIA at the time of John F. Kennedy's assassination. Needless to say, the Rockefellers have also been linked vaguely to amorphous Kennedy assassination conspiracies.[11]

The Rockefellers have been accused of using their donations to medical charities such as the Institute for Medical Research (now the Rockefeller University in New York) to promote conventional (i.e., scientific, evidence-based) medicine, aid Big Pharma in world domination, and crush alternative medicine.[2][12]

David Rockefeller of the Chase National Bank was supposedly one of the earliest advocates of building the World Trade Center in New York.[11]

The two towers of the World Trade Centre, destroyed in the 9/11 attacks, were supposedly nicknamed David and Nelson after the Rockefeller brothers.[7] And after the towers were destroyed they took revenge or something.

What does it all mean? Who knows? But it must mean something…

The Rockefellers are often accused of corrupt business practices, abusing their monopoly position, etc.[2] This may have more merit than any of the other theories here, and it's clear that American business has often involved a small group of enormously powerful people scheming together to make as much money as possible. It's called capitalism.

And obviously the Rockefellers invented the Zika virus and are using it to kill people. Apparently the Rockefellers have provided funding to an organisation called the American Type Culture Collection which sells biological preparations and offers freeze-dried Zika virus agent to reputable researchers.[13][14]