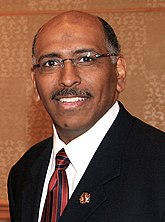 Michael "Notorious G.O.P" Steele (1958–) is an American former politician who was the Chairman of the RNC during a tumultuous two years for them: from the beginning of 2009 to the beginning of 2011, and the former lieutenant governor of Maryland during the Robert Ehrlich administration (2003-2007). He's a center-right Republican, supporting abortion rights on the state level to the ire of fundamentalist wingnuts such as Mike Huckabee and Tony Perkins, and opposing the Wars in Iraq and Afghanistan - a view which neoconservative William Kristol demanded he resign over.

He is also black, which has caused some speculation among the opposition that he was elected to that position solely on the basis of his race. This is backed up by the fact that he has messed up his position and made numerous gaffes proving he was not qualified. The fact that the people who elected him were the same people who had earlier denounced the supposed "affirmative action President" broke a number of irony meters. During his tenure the RNC broke fundraising records (over $198 million raised during the 2010 Congressional cycle) and Republicans won 63 House seats, the biggest pickup since 1938, thus giving Republicans back control of the House. The 2010 midterm elections were overall successful for Steele and the Republicans, as they also won six senate seats, seven governorships and the greatest share of state legislative seats since 1928 (over 600 seats). Despite this the Republicans threw him under the bus anyway.

Despite being conservative, Steele joined MSNBC as a political analyst in March of 2011.[1]

He hates Oreos,[2] and doesn't know squat about Eric the Red.[3]

On September 26, 2002, Steele had been in attendance of a gubernatorial debate between candidates Kathleen Townshend (Democrat) and Robert Elrich, Jr. (Republican), when a couple Oreo cookies had "rolled up next to [his] shoe".[5] Oreos had reportedly been distributed by Townshend's supporters as "Michael Steele cookies" as a racial insult (black on the outside, white on the inside).

This incident came to significant light five days after the debate when Paul Schurick, spokesperson for Elrich's campaign, reported a veritable hailstorm of cookies against Steele. He said, "It was raining Oreos. They were thick in the air like locusts. I was there. It was very real. It wasn't subtle." This sharply differed from Steele's own account of only having one or two cookies land beside him. Staff and other witnesses also denied seeing disruptive levels of cookie-throwing during the debate and post-debate cleanup, and no major news sources in 2002 reported the cookie-pocalypse occurring (although the Capital News Service at the time did mention that a cookie rolled into Steele's shoe).

Some Republicans, most notably Robert Elrich, Jr., continue to allege that Cookiegate had occurred, and accuse Democrats of being "revisionists" and tolerant of racial slights when they occur to Republican candidates.