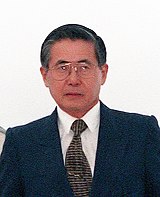 Alberto Kenya Fujimori Fujimori (1938–) is a Peruvian former dictator who ruled his country from 1990 to 2000 and is currently serving a 25-year prison sentence for human rights violations. He is nicknamed "Chino" (Chinese), despite being of Japanese descent; his opponents refer to him as "Chinochet" or "AseChino" (from asesino, murderer).

Fujimori, a right-wing independent supported by the Evangelical Church, came to power by unexpectedly beating the famous writer Mario Vargas Llosa in the 1990 presidential election, with the promise of ending Peru's critical economic and political situation. Since the mid-1980s, after decades of military dictatorship, Peru was suffering from hyperinflation and political turmoil amid the activities of the Maoist guerrilla organization Shining Path (a.k.a., Partido Comunista del Perú or Sendero Luminoso) as well as the Túpac Amaru Revolutionary Movement

(Movimiento Revolucionario Túpac Amaru or MRTA). Fujimori enacted an aggressive neoliberal program of mass privatizations (Fujishock), which helped reduce inflation and restored economic stability, but also came at the cost of vast impoverishment, which pushed the country's rural and indigenous masses into supporting the communist guerrillas.

In 1992, in response to what he perceived as Congressional obstructionism against his regime, and under the pretext of fighting the communist insurgency, Fujimori carried out a self-coup with the support of the army. He jailed his political opponents, dissolved Congress and suspended the Constitution. A few weeks later, he ordered the massacre of at least 50 imprisoned Shining Path members after an alleged riot in Canto Grande Prison. Fujimori's authoritarianism increased dramatically, even after the capture of Shining Path's leader and founder, Abimael Guzmán ("Chairman Gonzalo"). The Grupo Colina,

a far-right death squad, carried out a series of mass murders from 1990 to 1994 under the direct command of Fujimori, his Chief of Intelligence, Vladimiro Montesinos (a School of the Americas graduate who, ironically, was named after Vladimir Lenin), and the army's commander-in-chief, General Nicolás Hermoza Ríos. Over 3,000 people were murdered by his dictatorship during his first term in office alone.

Fujimori drafted a new Constitution, which allowed him to seek re-election. In 1995, he defeated former Secretary General of the United Nations, Javier Pérez de Cuéllar. During his second term, he strengthened his control over the military and became involved in a brief and pointless war with Ecuador. He also ordered the forced sterilizations of 300,000 indigenous women, and "solved" the 1997 Japanese embassy hostage crisis by summarily executing 14 members of the MRTA guerrilla group.

Smile, you're on Candid Camera!

In 2000 Fujimori was re-elected for a third consecutive term, although this time he was accused of electoral fraud, not only by his opponent, Alejandro Toledo, but also by international election observers. Despite massive protests, from violent clashes to public "flag washings",[1] Fujimori was duly inaugurated. A few months later, however, a scandal known as Vladivideos broke out when a TV station broadcasted hidden-camera footage of Vladimiro Montesinos bribing business executives and opposition political leaders into supporting Fujimori.

The dictator panicked. He ordered the immediate shutdown of the SIN (the national intelligence service under Montesinos), secretly ransacked Montesinos's home looking for evidence to destroy, called for early elections, and fled to Japan, where he announced his resignation from office via fax. However, instead of accepting his resignation, Congress decided to fire his ass formally destitute him. In 2001, he was barred from holding public office in Peru for 10 years, and Interpol issued an arrest warrant against him.

Fujimori remained in Japan, where numerous attempts to extradite him were blocked by the right-wing Japanese government. In 2005, the former dictator foolishly decided to visit Santiago, Chile, and was immediately detained and placed under house arrest until his extradition in 2007.

In 2007, he was sentenced to 6 years in prison for abuse of power, after he had ordered an illegal search and seizure of Vladimiro Montesinos's wife's apartment in 2000. On April 2009, he was found guilty of crimes against humanity (including murder and kidnapping) and sentenced to a further 25 years' imprisonment. On July 2009, he was given 7 more years for embezzling 15 million dollars in favor of Montesinos, and in 2015 he was sentenced to further 8 years, also over embezzlement charges (he had diverted 40 million from the military budget to buy off several sensationalist tabloid newspapers, or diarios chicha, and gain favorable headlines). That's 46 years of jail time, but luckily for the bastard, since prison sentences in Peru are served concurrently, he only has to live to 94 to be a free man.

Fujimori's accomplice, Vladimiro Montesinos, was extradited from Venezuela in 2001. He was accused of several crimes, ranging from drug trafficking to murder, and received a 25-year sentence in 2010. Former General Nicolás Hermoza Ríos, the third member of Fujimori's "troika", was also condemned to 25 years in prison in 2010 (later reduced to 20 years).

On December 2017, the center-right President Pedro Pablo Kuczynski issued a "Christmas pardon" for Fujimori on health grounds, which was widely denounced and met with angry protests. On October 2018, months after the resignation of Kuczynski over corruption allegations, the pardon was overturned by the Supreme Court.

(1975–) is a former Congresswoman who had previously served as the youngest First Lady in the history of Peru from 1994 to 2000, after her parents' acrimonious divorce; she ran for president in 2011, 2016, and 2021, losing the 2016 election by only 0.25% of the vote. In 2018, Keiko was sentenced to 3 years of preventive prison, as part of an investigation of her role as leader of a criminal organization within her party.

His son Kenji (1980–), also a former member of Congress, was suspended in 2018 following Kenjivideos, a political scandal reminiscent of the one that led to Fujimori's downfall in 2000.