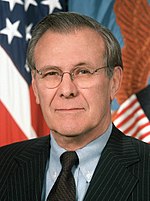 Lookin' for some weak little countries to beat up. Seen any?

Rumsfeld the man just came off as strikingly shallow, a non-entity, a shell filled with ambition but with no real thought process to him. The documentary The Unknown Known showcases the uncanny valley behind Rumsfeld. The director found him incredibly frustrating to interview because you just couldn't meaningfully engage with him; there's simply nothing there. It is like watching an interview with an automaton. The takeaway was that some people are on autopilot, and if they get into positions of power, you're screwed. End of story. Not the most satisfying takeaway to be sure, but a worthwhile documentary if only for that. Though it was undoubtedly a maddening watch for many.[7]

Unusually for neo-cons, Don is no chickenhawk; he served as a naval aviator for three years in the 1950s and was a kung-fu master[8] reservist for several decades after that. So that's one redeeming quality. We may have some trouble finding others though.

Rumsfeld was Chief of Staff and then Secretary of Defense in the Ford administration. For some unknown reason George W. Bush attempted to resurrect his career 25 years later. At the time it seemed like he was surrounding himself with experience. (Cheney and Rumsfeld both had a lot of experience; they just turned out to be scumbags.)

What they missed on the historical part was that from 1945 to 1992, the US stationed no fewer than 200,000 troops in West Germany per year. And that's not even counting the tens of thousands of British and French troops there as part of the occupying forces of Germany. In fact, British troops (known as British Forces Germany) still have 5,000 troops in Germany—not due to leave until 2020. To say nothing of the wholesale disarmament of society, the rounding up of Nazis and collaborators into large prison camps, the societal and cultural and religious differences, etc. None of that was addressed. It's the classic imperialist tactic, justifying nationalistic wars of aggression over the past 75 years based on successes within huge coalitions 75 years ago.

The White House was by no means all-in on Iraq. They wanted a cheap war, and they got a long one.

I'll be in the back, uh, supervising[edit]

In one of the worst acts of tempting fate, Donald Rumsfeld, during a meeting with Congressmen at the Pentagon, warned — on the morning of 9/11 — that “sometime in the next two, four, six, eight, ten, twelve months there would be an event that would occur in the world that would be sufficiently shocking that it would remind people again how important it is to have a strong healthy defense department that contributes to — that underpins peace and stability in our world.” Very tellingly, when the attacks occurred that day, Rumsfeld deserted his post for half an hour before returning. For the 30 minutes or so that he was gone from his office, other officials were desperately trying to contact him, but were unable to do so.[16] Not a hawk, but he's definitely a chicken.

Here is the true extent of Rumsfeld's hypocrisy: When the Americans had Osama Bin Laden cornered, a general called up Rumsfeld to ask for an order to pursue. Rumsfeld said no, and Osama left for Pakistan.[17]

Rumsfeld's most important legacy may be the radical privatization of the American military, which has been an important factor in the conduct of the War on Terror.

Rumsfeld was sued by a guy who claims Rumsfeld authorized the use of torture against him, but it didn't go through.[18]

Rumsfeld's quote above is similar to if not verbatim from Werner Erhard. So, for that matter, is the quote below: