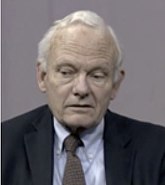 Arthur Brouhard Robinson (1942-) is a former chemist and current crank, woo-meister, and fringe political figure. Robinson was a professor of chemistry at the University of California-San Diego until 1972, when he resigned. In 1980, he created the Oregon Institute of Science and Medicine (OISM). In 1997, he co-authored the brochure that accompanied the Oregon Petition with his son and Willie Soon.[2]

Robinson's first venture into pseudoscience came during his partnership with Linus Pauling during Pauling's Vitamin C quackery days. He and Pauling founded the Linus Pauling Institute for Science and Medicine in order to promulgate orthomolecular medicine.[3] Pauling's political views as a hardcore leftist and peacenik (he had won the Nobel Peace Prize in 1963) rubbed many of his colleagues the wrong way and Robinson happened to be a staunch conservative wingnut. Robinson also challenged Pauling's views on Vitamin C. The two had a falling out and Robinson went on to found OISM to further promote his own brands of quackery.

Robinson has a deep history of working with various luminaries in the field of pseudoscience. Fun facts about Art:

Robinson ran on the Republican ticket against incumbent Peter DeFazio for a seat in the House of Representatives in Oregon's fourth district. He had an infamous melt-down incident in an interview with Rachel Maddow, where he accused Maddow of smearing him by quoting his own writing from Access to Energy and gibbered incomprehensibly.[6] Robinson's writings have a number of Dominionist themes in them (he did write a book with Gary North) and he implies that homosexuality is the cause of AIDS in his AIDS denial articles. He supports removing all taxes on energy and abolishing the public school system. His homeschooling curriculum uses the books of G.A. Henty, which promote themes of British imperialism and racism.

Robinson had the Ron Paul Stamp of ApprovalTM. He lost to DeFazio but still managed to get 45% of the electorate, thus reaffirming the crazification factor.

Besides his love of radioactive waste, Robinson has said a number of other batshit things on environmental issues, too many to count. His solution to all waste materials? Dump it in the ocean!

Wastes dumped into the deep ocean will soon reach the bottom, where they are less hazardous than nearly any other place on Earth. Most materials will remain there: marine organisms are rare in the deep ocean, food chains are long, and few materials will be carried back to mankind. And that is what waste disposal is all about.[7]

In 2011, Robinson claimed a political conspiracy to block his three children attending Oregon State University from getting their doctorates. He set up a site called Oregon State Outrage and he's been cross-posting at WorldNutDaily trying to get people to spam the deans of the university. OSU has declared that Robinson is full of it.[9]