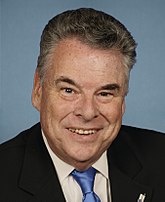 Peter King wants to know if you're a terrorist.

Peter "A noun, a verb, and Al Qaeda" King[1] was the Republican Representative for New York's third district (located in Long Island) from 1993 until 2013, and then of the second from 2013 to 2021. King is a staunch Roman Catholic and is one of the many public figures to have jumped on the Islamofascism bandwagon after 9/11. Before this, King had actually enjoyed broad support from the Muslim community, helping to raise funds for a multi-million dollar prayer hall and supporting US intervention in Bosnia and Serbia to protect Muslims.

After 9/11, King cited some anti-Semitic and conspiratorial statements made by members of a local mosque he had worked with as "evidence" of widespread Muslim radicalization in the US. In a 2004 appearance on Sean Hannity's show, he stated:

King became an apologist for Bush administration policies such as the PATRIOT Act, enhanced interrogation techniques, and Gitmo. He joined in the pro-racial profiling chorus as well. In 2007, he told Politico that there were “too many mosques in this country," then "clarified" by stating "My position in this interview, as it has been for many years, is that too many mosques in this country do not cooperate with law enforcement." He also jumped on the "Park51 as a terrorist command center" molehill mountaineering.

In 2010, King was chosen as chairman of the House Homeland Security committee and announced that he would hold hearings on Muslim radicalization in America. King's crass double standard on the matter was revealed as the evil traitorous media dug up his history of support for the Irish Republican Army during the 1980s, when he called himself "the Ollie North of Ireland."[3] King is a long-time supporter of Sinn Fein leader Gerry Adams and compared him to George Washington.[4] Jon Stewart summed up the situation thusly:[5]

King was considering a presidential run for 2016,[6] which explained his grandstanding in the House. For obvious reasons, this dodo of a plan never took flight.

King supported Donald Trump's executive order banning people from seven Muslim-majority countries from entering the United States, saying “I don’t think the Constitution applies to people coming in from outside the country, especially if there is a logical basis for it.”[7]

What the actual facts say[edit]

The director of the center stated:

In January of 2011, Rep. Bennie Thompson (D-MS) wrote an open letter in Politico stating that, in his work, no law enforcement officials had made complaints like those King purported.[9]

The hearings began in March of 2011. Sheriff of Los Angeles County Lee Baca, one of the witnesses called, even invited King to LA to see that Muslim informants were important in foiling terrorist plots. King has declined to comment on Baca's invitation.

King's hearings have been compared to those of Joe McCarthy by some. However, they overlook the fact that while the intention may be similar, King is simply a wingnut with limited political pull and the boogeyman du jour is Obamunism, so King is about five years too late on this.