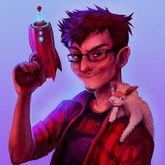 Christopher Ray Maldonado (December 4, 1993–), more famously known by the moniker Chris Ray Gun, is a Puerto Rican YouTube personality, known for his semi-frequent discussion of political topics. As of December 2020, his YouTube channel has over 643,000 subscribers and 107 million views.[1] He has over 179,000 Twitter followers.[2]

Maldonado has identified as a "classical liberal"[3][4][5][6][7][8] but has more recently rejected that label in favour of defining himself as a social-democrat.[9] Maldonado's views can aptly be summed up as mainly liberal[10] yet socially conservative in a few instances. On one hand, he has advocated for fiscally-liberal causes such as universal healthcare and free schooling. However, he appears to lean center/right in some regards, such as critiquing these as being economically nonviable.[10] This centrist approach to politics appears to transfer to his opinions of people involved within politics; he has appeared on The Rubin Report to discuss with objectivist libertarian Dave Rubin,[11] but he appears to be critical of conservatives such as Ben Shapiro[12] and Candace Owens[13] and is ambivalent towards Jordan Peterson.[14]

He's also been critical of the idea that there is a gender pay gap.[15] He appeared in videos such as MTV's "2017 New Year's Resolutions for White Guys,"[16] and appeared in a video from The Amazing Atheist called, "QUESTIONS WHITE MEN HAVE FOR SJWs!"[17]

Compounding problems there, is that Chris has been extremely dismissive of Black Lives Matter*, to the point that he will parrot the typical canard of "All Lives Matter," a neologism and misinterpretation of "Black Lives Matter" commonly used to try to silence the movement, and attempts to paint BLM as a hate group.[18] He has also defended comparisons of the group to Blue Lives Matter, painting criticisms from people who take issue with parallels made between the two groups as simply having a negative opinion of the group, as opposed to the clear difference in that black people can't stop being black whereas being a police officer is a career choice.[19]

Not helping matters is that at one point, he got into a Twitter spat with MTV's Franchesca Ramsey,

a black comedian and activist:[20]

Chris Ray Gun: Racial tensions in the US are bad, but at least they've given unlimited energy in the form of MLK spinning infinitely in his grave.[21]
Franchesca Ramsey: but how he get in that grave tho?[22] i wish folks would read something other than the opening line of "i have a dream" before fixing their mouth to use MLK's name to silence[23]
Chris Ray Gun: I guess I totally forgot about the part of the speech where he argues for racial unity and common sense, and then immediately says "lol jk."[24]

Such a whitewashed interpretation of King's words ignores the elephant of the room where he directly condemns white moderates in his "Letter from a Birmingham Jail" who would undermine the efforts of black activists because they're being too demanding of their rights or, worse yet, would make a false equivalence between the ardent struggle of black activists and the white oppressors who would deny them.[25] To argue for the legitimacy of Martin Luther King's words in favor of some blanket term of racial unity to a black woman in today's era where Black Lives Matter is an actual movement protesting against rampant police brutality against black people, and especially in a context where white supremacy is on the rise, cannot be construed in any favorable light.

As well, he once attacked black trans activist Kat Blaque. Blaque once replied to a deliberately racist tweet, which said:

Naturally then, she responded appropriately with witty venom that:

Maldonado, not one to miss an opportunity, removed the original context that Blaque's post was made in, and only screencapped her retort while adding his own commentary, ""Your race has inferior genes," said the anti-racist."[28]

The nail in the coffin is that he once made a comedy video mocking the concept of environmental racism, which refers to the concept of places like Flint, Michigan still having lead poisoned water and not, as he puts it, "Global warming [being] racist."[29]

He is also highly critical of feminism, looking down on the concept of mansplaining,[30] disregarding catcalling as a form of harassment,[31] and has said that Gamergate's death threats against people who were a majority of women, were just internet death threats that don't mean anything.[32] As one might expect then, he was a supporter of Gamergate,[33] defended the Fine Young Capitalists,[34] called liberals "fucking retarded" for attacking a gay man like Milo Yiannopoulos while ignoring his more unsavory deeds,[35] and drew on false equivalence between Jack Thompson and Anita Sarkeesian,[36] at one point making an apologia for the death threats the latter received because of "the stance she took."[37] He disregards the college rape problem where many people are skeptical of rape claims where they don't need to be.[38] Additionally, he makes videos attacking that right wing punching bag, the Social Justice Warrior, and has parroted the "regressive left"[39] far too often to simply be a coincidence. He has defended the likes of Sargon of Akkad, Shoe0nhead and Armoured Skeptic as being unfairly demonized.[40]

He believes there is a spectrum but has criticized the idea of non-binary genders as "largely people with numerous quirks trying to invent a rigid system with which to group themselves" and "you only need two or three genders to get the point across."[41] However, he has egged on transphobia, as when transwoman Thorne Melcher took issue with a joke tweet from comedy YouTuber Ethan Klein that involved accidentally cutting off one's penis and deciding that his name was Ellen from then on. Maldonado decided to screencap the part of Melcher's post which called out Klein for being transphobic and not the joke that led her to that reaction in the first place.[42] In addition, he once said that men who choose to be with transwomen who haven't undergone sexual reassignment surgery are gay[43] and targeted trans activist Zinnia Jones for once tweeting that straight men who are exclusionary of transwomen because of their genitalia should try and be more open minded, insinuating that she was hypocritical for saying that homosexuality wasn't a choice and being in support of gay rights, but also (by his logic anyway) telling straight people to be gay.[44] He also made an accusation on Twitter in a now-deleted Tweet that Jones was sending unsolicited dick pics online to people.[45]