From RationalWiki
(Redirected from Christian science)
Jump to: navigation, search
Not to be confused with Scientology, which is somehow crazier than Christian Science.

"Christian Science" is an oxymoron in the sense that "Christian" implies some form of dogma and set of beliefs to be adhered to, while "Science" is a method that does not and cannot have a strict dogma. Unfortunately, it's an oxymoron that has attracted a sizable following (which isn't entirely surprising, since the "Science" part of the name was tacked on to gain credibility). Contrary to the name, followers of "Christian Science" do not actually believe in science — or even, it would seem, their own senses, since they specifically deny any evidence which contradicts their interpretation of the Bible. There are also some who would doubt that their religion is particularly Christian, but that is beyond our scope.

Christian Scientists deny the reality of the physical world. They instead believe that the only reality is purely spiritual and that there is only one substance of which we are all composed (God). As a consequence, Christian Scientists deny the reality of pain and disease, believing them to be deceptive misperceptions of the pure spiritual nature of man and God. They contend any such misperception may be remedied through prayer and reflection on God's perfection and goodness.

Nancy Brewster was a seven-year-old girl who died as a direct result of neglectful "treatment" at the hands of her mother, who followed the teachings of Christian Science. Because Nancy was "God's perfect child," it would be impossible for her to have health problems — thus when exercising in 100+ degree heat didn't cure her lymphoma, it was because she was being stubborn, a perfectly valid reason for her mother to repeatedly beat her and blame her for her illness. After her death, her mother told her siblings that she had taken a trip to Africa. Ms. Brewster's published testimony in the Christian Science Journal ignores the existence of Nancy.[2]

Many other children have also died at the hands of Christian Scientist parents.[3] The conditions they die from are usually easily treatable, e.g. diabetes. Due to religious exemptions in criminal and civil code many of these parents are able to escape justice altogether or receive lesser charges.

A similar event was presented in Family Guy episode titled "Livin' on a Prayer" (Season 10, Episode 12). In addition to the usual shoehorned cut-scenes the plot of the episode is based around an infant being diagnosed with a treatable form of cancer taken home by his Christian Science mother, to be kidnapped by the Griffins who took him to a hospital. There is a brief standoff at the hospital between Lois and the parents of the child (and police) which includes Lois making brilliant counter-arguments to Christian Science ("What if medical treatment is God's will?" or "What if penicillin is answered prayer?"). The standoff ends with Lois saying "What's the point of praying to God for a cure if you're just going to wipe your butt with his answers?" Interestingly, there was no word of a lawsuit regarding the incident.

The church headquarters in Boston

Unsurprisingly, Mary Baker Eddy used Christian Science as the basis for founding a new church. Its official name is The Church of Christ, Scientist. Instead of sermons, the Church has readings from Science and Health with Key to the Scriptures, per Ms. Eddy's instructions.

The Church of Christian Science claims that they are unable to speak for anyone, as they are an individualistic religion. However, their web page on "social issues" would suggest that they do have specific positions on some issues:[4]

CS in positions of power[edit]

During the 1960s and 1970s, Christian Scientists occupied powerful positions in the federal government, including:

Haldeman and Ehrlichman used their influence in the White House to push a bill through Congress which extended the copyright of Eddy's Science and Health... for an extra 75 years. The bill was declared unconstitutional. 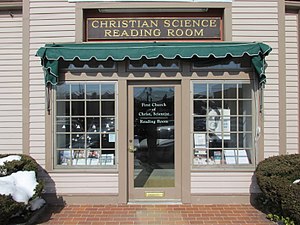 The movement's most lasting contributions to humanity are its newspaper The Christian Science Monitor, which is usually considered quite excellent,[note 1] and numerous air-conditioned "Christian Science Reading Rooms"

tailor-made for a broke student to duck into for a few hours of quiet while traveling.

However, the movement appears to be in slow but steady decline. The number of Christian Science congregations fell by half, and the number of practitioners declined by four-fifths, between 1971 and 2009.[5] The Monitor reports that in 2009, more new members came from Africa than the United States.[6]