From RationalWiki
(Redirected from Columbus)
Jump to navigation Jump to search 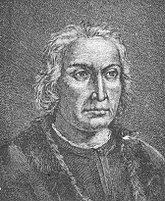 In most of North and South America, Cristóbal Colón, or Christopher Columbus in English, is recognized as the most significant of the early European explorers of the Americas.

Despite small visits and settlements by earlier explorers, especially from Scandinavia and likely Polynesia, Columbus was backed by the power of the empire of Spain, opening the door for the large-scale exploration and exploitation of the Americas. To shamelessly quote Wikipedia on the subject He is regarded more accurately as the person who brought the Americas into the forefront of Western attention. "Columbus' claim to fame isn't that he got there first," explains historian Martin Dugard, "it's that he stayed." However, mentioning any previous expeditions by Europeans to the Americas - or even perhaps whatever excursion that caused native Americans to get there - is considered by some to be "anti-Christian", as Columbus was a good Christian boy, therefore worthy of the credit, not some Icelandic Christians[note 1] pagan with bad body odor.

Current controversies surrounding Columbus in the U.S. involve the implications of his "discoveries" for the native populations i.e., enslaving them, genocide, forced conversion, and stealing their gold.

Columbus's soldiers killed and enslaved with impunity at every landing. When Columbus fell ill in 1495, "what little restraint he had maintained over his men disappeared as he went through a lengthy period of recuperation. The troops went wild, stealing, killing, raping, and torturing natives, trying to force them to divulge the whereabouts of the imagined treasure-houses of gold." According to Las Casas, 50,000 natives perished during this period. Upon his recovery, Columbus organized his troops' efforts, forming a squadron of several hundred heavily armed men and more than twenty attack dogs. The men tore across the land, killing thousands of sick and unarmed natives. Soldiers would use their captives for sword practice, attempting to decapitate them or cut them in half with a single blow.[1]

The natives attempted to fight back against Columbus's men but lacked their armor, guns, swords, and horses. When taken prisoner, they were hanged or burned to death. Desperation led to mass suicides and infanticide among the natives. In just two years under Columbus's governorship more than half of the 250,000 native Arawaks in Haiti were dead.[2] The main cause for the depopulation was disease followed by other causes such as warfare and harsh enslavement.[3] 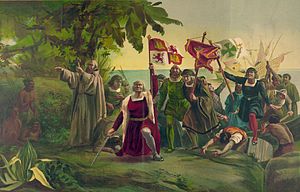 Columbus was born in Genoa. His origins are not a subject of debate amongst serious historians, though especially among amateur historians there is the occasional alternative origin theory. Some have pointed out he may have been Jewish, escaping the inquisition that engulfed Spain after the expulsion of the Moors. No evidence for this theory exists, however. In fact, since Columbus had plenty of enemies, sooner or later one of them would have pointed out his Jewishness. Though during his lifetime he was accused of a lot of things[more detail please], being Jewish was not one of them. Others have suggested he may have had Portuguese, Galician, Catalan, Armenian or Greek origins.[4][5][6][7][8][9] Coincidentally, the proponents of those theories are Portuguese, Galician, Catalan, Armenian and Greek, respectively.[citation NOT needed]

Although this is frequently used as an image of Columbus, it was painted ten years after his death and is believed to actually be a portrait of a Bolognese cleric.[10]

Schoolchildren are often taught the following rhyme to remember when Columbus found America (even though he thought it was India and was definitely not the one to "discover" it):

Another legend and so-called factoid around Columbus is that he sailed around the Earth to prove that it wasn't flat - and that his sailors were fearful that he would cause them to fall off the edge. Thus, before Columbus and Columbus alone, everyone thought the Earth was flat. As it was known to ancient Greeks that the world certainly was round this is, of course, nonsense (although whether common people were aware of the fact is debatable, as many people even today think the earth is flat, despite conventional wisdom and modern science saying that it isn't). The myth further gets confused by conflicting legends that it was Columbus who thought the Earth was flat and that the sailors thought the world was round and they would "slip off the rounded edge" or something.

Another lie is that the Portuguese rejected his request for funding because they thought the world was flat. They knew perfectly well that it was round, and they also knew that Columbus had grossly underestimated its size. He calculated the voyage from the Canary Islands to Japan to be about 3,700 km, when in reality it was more like 19,600 km, much too far for any ship of the time to travel without making port. In short, if he hadn't run into land completely by accident, Columbus and his crew would have run out of food and water well before reaching Asia. This is part of why Spain was willing to fund him. At the time Spain was not a major naval or colonial power (in fact, at the time, Portugal, the Ottomans, and, arguably, Venice were the only such major naval and colonial powers in Europe), and had relatively little to lose. They had no real reputation which might be damaged (as Portugal did) and the cost for the Spanish Monarchy was fairly small (about the cost of a single state banquet). So, Spain funded the expedition figuring he would find something in between the Canary Islands and Japan, and they could shove it in Portugal's face, or they would be out a small sum of money and there would be one less irritating Italian in the world.

, the author of "Rip Van Winkle" and "The Legend of Sleepy Hollow". In 1826 Irving published A History of the Life and Voyages of Christopher Columbus

which recast Columbus as a pioneering crusader against European ignorance, and hence an archetype of the "rugged American hero". That interpretation was wildly popular with an American audience looking for reasons to feel superior to Europeans, and the book became both a bestseller and the definitive reference on the life of Columbus until well into the 20th century. Despite its enduring popularity, Irving's account has been dismissed by historians as "fanciful and sentimental" and the product of "an active imagination".[11][12]

In the United States, there is a Federal holiday in honor of Columbus on the second Monday of October.[note 2] This holiday is the subject of minor controversy due to Columbus's rather violent legacy. The Italian-American community often sponsors Columbus Day celebrations, and Native American groups often protest these. However, since it allows a few adults a paid day off from work and children a day off from (public) school, not too many people care about the criticism. Thirteen states and a growing number of cities, however, are increasingly not celebrating Columbus Day as protest in favor of Indigenous Peoples Day.[13] Joe Biden was the first U.S. president to officially recognize Indigenous People's Day.[14]