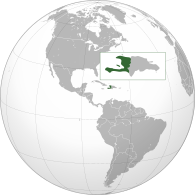 Location in the Caribbean.
Haiti

Haiti is a shithole[1] country nation state loose conglomeration of people on the westernmost third of the island of Hispaniola. It is most well-known for its extreme poverty, and for being the first independent black republic in the world, and the site of the world's only successful slave revolution. It is also the home of Vodun.

The people were recently hit by a tragic natural disaster stricken down by the hand of God Almighty Himself.[2]

As the French colony of Saint Domingue, Haiti was once the richest polity per capita on earth. That all changed when some hooligans got fed up with French colonialism and sent the Frogs packing. The fact that the slaves had managed to free themselves and create an independent nation out of a former colony scared the crap out of everyone in the Atlantic world, and the new state quickly became a pariah. Having promised large amounts of "reparations" to France for the loss of the slaves attendant with Haitian independence, Haiti got into a bit of a mess and a century later was occupied by the U.S., who were concerned about the growing German influence there. A former Marine became the de facto head of state.

From 1957 to 1986, Haiti was run by two U.S.-backed dictators, "Papa Doc" Duvalier and then "Baby Doc" Duvalier, who used voodoo death squads to keep everybody in a state of docile terror while American and French corporations razed the land and used Haitians as a captive market and cheap labor.

Magic is a big deal in west African countries, and this is also true of Haitian voodoo adherents. It's common to believe in the strength of a particular person's magic, which has to do with their relationship with the loas, who are semi-divine figures. Anyways, so part of Papa Doc's strategy for gaining and holding onto power was to use religion to his advantage. He would wear dark glasses and carry a cane because those are aspects of Baron Samedi, the loa of death, so the idea was to instill in Haitians a fear or conviction that Papa Doc had a special relationship with death, or maybe even was Samedi himself. So his death squads, the Tonton Macoute

, would deck themselves out in symbolically-charged decorations like skulls and crap to remind people: You can't hide from us, we control the spirit world and the material one. This has the added benefit of attaching spiritual and religious meaning to the stigma of political dissent.

Fun fact: Voodoo rituals are used by Nigerian crime syndicates as a way to control women who are trafficked as prostitutes.

It was during Baby Doc's reign that a populist overthrow happened, exiling the murderous family to France (how nice of the French, oui oui?). One of the leaders of the pro-democracy movement, a liberation theology Catholic priest named Jean-Bertrand Aristide, became Haiti's first democratically-elected president in 1990, but was almost immediately ousted by a (US-backed?) military coup. The military regime collapsed a few years later and the CIA helped re-install Aristide as president. It's hard to say what kind of relationship Aristide had to the US during the 90s, but it's fair to say that it was ambivalent. Anyway, they forced him out of the country in 2004,[3][4] possibly as punishment for him asking France to pay back the money

they forced Haiti to pay after the first Haitian revolution, and he remained in exile while his party was excluded from elections and turnout gradually plummeted to 20%.[5][6]

The military took over, but under direct threat from the United States they relinquished their power back to the people, whilst Jean-Bertrand was again elected. Once again a military coup ousted Jean (for good this time) and installed a merciless prick who unashamedly robbed the people blind.

A guy by the name of René was recently elected into the Presidential office. However, because Haitians kicked out all the farmers (they were smelly French people), Haiti has no economy, and, thus, no money...making the position of President a purely symbolic gesture. Just recently he has been seen on TV wondering what his country was going to do while he got the fuck out. The good news for Haitians is that their long-time rivals, the Dominicans, have buried the hatchet of the far-off Haitian invasion (that we forgot to mention) and are coming across the border to help their fallen neighbors.

A very few people control the vast majority of the wealth in Haiti, and they make no bones about spending it like drunken sailors. In their mansions overlooking the slums they gate themselves off and lavish themselves with exotic food and alcohol. All of them are in abject denial that there is any kind of problem with their lifestyles as the rest of the country destroys itself just trying to scrape together enough food to last another day.

Some time later, another guy named Michel Martelly was elected into the presidency. Before that, his most notable accomplishment was starring in his own music video under the name "Sweet Micky". [7]

What makes everything so bad for the 2010 earthquake is the addition of all factors added together. A broke and ineffective central government means they have no rescue crews and no means of feeding, watering or sheltering any of the million-plus refugees. Their rocky past also means that the buildings were very poorly constructed, often using hay as filler in cement (especially in recent times after China quadrupled the price). Buildings were also built very close together and on the side of mudslide-prone hills that weren't properly prepared.

What's truly sad about the recent eartquake, is that if such a tragedy had never occurred, Haiti would still be in a slow, terrible earthquake of poverty and decay. For the sake of your fellow human beings, do what you can do to help!

Recently, the Supreme Court of the Dominican Republic (where Haitians tend to emigrate en masse) has declared people descended from Haitians to not be natural-born citizens of the Dominican Republic, because hey, why not? This has led many, many people to be effectively stateless and citizenshipless, effectively not existing (although given how they're treated there, it probably didn't make much of a difference).

Needless to say, this has sparked much backlash and controversy both inside and outside of the Dominican Republic for obvious reasons. And also because the Dominican agriculture and construcion industries depend on extremely underpaid and overworked Haitian immigrants.

Like France, Haiti too has a history of popular revolt, and that ever present spectre of popular discontent at the neoliberal status quo has reared its ugly (to the wealthy) head yet again as Haitians have taken to the streets to protest the depreciation of their country by predatory neocolonial Western multinational corporations, corruption at the top, and are demanding the resignation of the US-backed President Moise. Haiti has a long history of Western exploitation, specifically in recent years American exploitation, most noticeably within this century the American backed coup of President Aristide, this current bout of protests can be seen as a reaction to centuries of humiliation at the hands of imperialist foreign powers.[8]