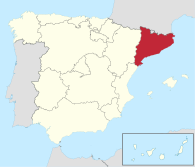 The red bit is Catalonia. Some proud Catalans might pretend not to know what the white bits are.
Catalonia

Catalonia (Catalan: Catalunya; Occitan: Catalonha; Spanish: Cataluña) is either a country or a "nationality"[1] organized into an autonomous community in Spain, depending on whom you listen to. It includes the major Spanish city of Barcelona, and its namesake football team.[2] An independence referendum was held on October 1, 2017. Out of the 43% of Catalan voters who voted, 90% voted to become their own nation state.[3] However, the election was not supported by every Catalan. The probability is the community is near to being evenly split on the issue.[4]

The Principality of Catalonia as a political entity was built along the middle ages and the early modern period,[5] as a member of the composite monarchy known as the Crown of Aragon (which must not be confused with one of its constituent parts, the Kingdom of Aragon). It dominated large parts of the Mediterranean lands, as well as the trade routes across the sea. Catalonia has been part of the Monarchy of Spain since the crowns of Castile and Aragon joined into a dynastic union, with Catalonia and the other realms retaining their own legislation and institutions. Eventually, calls for separation from Spain flared up, starting as early as the 17th century.[6] Catalonia supported the claim of Charles of Habsburg in the War of the Spanish Succession (1701-1715) and, after its defeat, the Bourbons supressed much of the Catalan institutional system, replacing it with an absolutist government. During the 19th century it became a center of industrialization. The Second Spanish Republic (1931-1939) established the political self-government of Catalonia. During the Spanish Civil War (1936-1939), Catalonia remained loyal to the Republic, because the left-wing nationalists, as well as the anarco-syndicalists had much of the power. It took until 1939 for Barcelona to fall, and Catalonia was one of the last Republican strongholds until the very end of the war. In the Spanish Civil War, George Orwell fought in Catalonia, and later wrote his book, Homage to Catalonia.[7]

Catalonia was autonomous in the time before the rule of Francisco Franco, but lost that autonomy under his dictatorial rule. However, after Franco's death (1975), Catalonia regained much of their autonomy. In 2006, Catalonia became even more autonomous, with some additional financial powers not previously had. That state ended in 2010, when the Constitutional Court of Spain decided that part of the Statute of Autonomy was in violation of the Constitution. Many Catalan citizens criticized the decision and then wanted the self-determination and even more or total independence from Spain. Separatists came into power in 2015, and they then planned a full referendum for October 1, 2017, also known as 1-O in the area. Many people who could have voted did not, especially those associated with the unionists, which were boycotting it, and those that opposed independence. The turnout was 43%. 90% of voters voted for Catalonia to be an independent nation.[8] On October 27, independence was declared by the Catalan parliament, though Spain had already readied to take legal action against Catalonia if that occurred. Spain swiftly moved to dissolve the Parliament of Catalonia, get rid of the heads of the government, and call for snap elections. Carles Puigdemont, the then-President of Catalonia, later fled to Brussels, Belgium.

An oddly familiar flag of the Catalan independence movement.

The Catalonian culture does share some similarities with that of the rest of Spain, but is different. They share much the same history and they share the same soccer league, La Liga. However, some Catalans have a different national identity than that of other Spaniards. Catalan cuisine, though similar enough to Spanish cuisine that some people could confuse it, is a different cuisine,[11] though to be fair the same could be said for other Spanish regions. Catalan cuisine generally involves fresh seafood, meat, and vegetables that are native to the region. Bread with tomato; botifarra, a sausage; and escudella, a stew, are three common Catalan dishes. Crema Catalana, a dessert similar to crème brulée, is also a hallmark of Catalan cuisine.

Catalan is one of the languages spoken in Catalonia aside from Spanish. It is also spoken in parts of Valencia, a small segment of France, Andorra

, the Balearic Islands, a small part of Aragon, and Alghero in Sardinia. It is the sole official language of Andorra.[12] Valencian is either the Catalan dialect of Valencia, the opinion favoured by most knowledgeable linguists, or a very closely related separate language. Roughly 9.5 million people speak Catalan, most of them in Catalonia. The Renaixença, Catalan for the Renaissance, was the period in which Catalan culture, and especially the language, underwent a status transformation into a respectable language for writers such as Jacint Verdaguer and other intellectuals. Institut d'Estudis Catalans is the primary standardizer of the Catalan language. Catalan is a Romance language and thus descended from Latin. It is related to Spanish, but is by no means mutually intelligible, and it is closer to the Occitan language of southern France. Between Latin and Catalan was the form of the language known as Old Catalan.[13]