From RationalWiki
(Redirected from Conservapedia:Blocking the Planet)
Jump to navigation Jump to search

As more and more people become aware of what an intellectual cesspool Conservapedia is, the powers that be have to resort to ever more extreme measures to preserve the extremist orthodoxy on their "Trus(t)worthy Encyclopedia". A major weapon in their arsenal is the massive IP range block, which is essentially just a way of rescinding the "open editing" policy. The number of people they can trust to preserve the ideological purity of their website keeps shrinking (especially as one editor after another turns out to be a sensible person, or, as they like to say, a "traitor"), so they have to block out the rest of the world.

File:Ipblock-range-contrib-Conservapedia-20090125.png
The number of IP addresses blocked on Conservapedia over time.

The principal way this is done is with the IP range block. All editors' IP (Internet Protocol) addresses are noted by the wiki software, and anyone they don't like can be banned. In their neverending paranoia, escalating daily, to prevent that user from re-registering under a different name, the IP address is blocked. For instance, if Conservapedia sysops hate Bill, and Bill lives in the same city as James (who perhaps share their views[note 1]), and James signs up for Conservapedia, by sysop logic, James must be Bill, and he will be blocked asap. Because IP addresses are often assigned randomly from large blocks by ISPs (Internet Service Providers; companies like Comcast, Verizon, and AT&T), entire ranges are often blocked. This has the property of blacking out entire ISPs, cities, colleges, companies, and countries. But the powers that be don't care; they already have all the users that they feel they can trust. In any case, colleges and foreign countries are particularly ideologically suspect.

The use of range blocks appears to have become extremely widespread around December 2008. As of this writing (June 2009), the number of IP addresses that have been blocked TEN MILLION TWENTY MILLION TWENTY ONE MILLION. That is far in excess of the number of users, number of existing pages, or even the number of page edits on Conservapedia (less than 700,000), and represents 1 IP address blocked for every 5.35 page views. 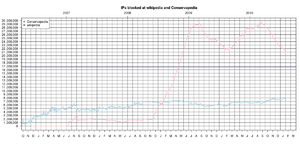 IPs blocked at CP and WP 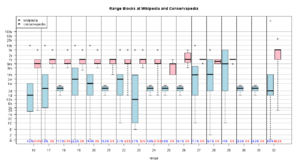 block periods of non-infinite range blocks at CP and WP

Wikipedia issues IP range blocks, too. But there are a few decisive differences:

The following are places that Conservapedia can no longer be edited from, or are particularly untrusworthy. Conservapedia sysops have begun to assume by mere geographical location that users are sockpuppets of each other.

Libraries you should not use[edit]

We would like to have thought that holding libraries hostage is a level to which Conservapedia would not stoop. We were wrong. Since this was not an IP block, we don't know what library it was, but, being a "sockpuppet" block, it was apparently aimed at some IP or IP range.

Companies you should not work for[edit]

Hotels at which you should not stay[edit]

State government offices you should not work for[edit]

School systems you should not use or work for[edit]

Universities you should not attend[edit]

Colleges and universities receive particularly bad treatment; this may be due to the generally higher level of intellect to be found there. While our data are not conclusive, it appears that the following universities are currently blocked. This list may not be entirely accurate due to problems determining the location corresponding to an IP address.

Cities you should not live in[edit]

Blocks in the US

The extensive list of these "Forbidden Cities" is below: 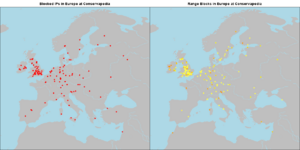 Countries not to live in[edit]

More of a footnote and not quite enough for its own article, but when it comes to non-US countries, CP sysops are much more radical with their banhammer:

Wireless devices not to use[edit]

Don't expect to be able to edit using your Blackberry, on its own or tethered to your laptop. Whether he knew what he was doing or not, TK took out the entire Canadian and US Blackberry network for all mobile providers (T-Mobile, Rogers, AT&T, etc.) until March 2010, with the deceptive block message that he was merely banning "liberal Canadian trolls, Alexkm and RonS -- Research In Motion Inc. -- Waterloo, ONT, Canada)." Blackberry is go. I repeat: Blackberry is go.