From RationalWiki
(Redirected from Contrapoints)
Jump to navigation Jump to search 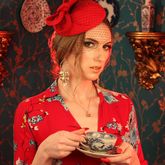 Natalie Wynn,[1][2] (1988–) better known as ContraPoints, is an American trans woman[1][note 1] identifying as a "pessimistic socialist".[6] Unlike many YouTube talkers, Wynn has a background in academia.[7]

After posting her much-noted video on clinical psychologist and conservative "intellectual" author Jordan Peterson,[8] her subscriber count rapidly surpassed 100,000.[9] Wynn's YouTube channel now has over 1.6 million subscribers and 80 million views.[10] Her most-viewed video is about J.K. Rowling and has over five million views.[11]

Wynn began her channel, ContraPoints, in 2011[12] with videos discussing political or social ideas and/or responding to other YouTubers, particularly those involved in the New Atheism or Anti-SJW spheres. As the channel has developed, her scope has broadened, discussing new types of media and different subjects, particularly American politics and economics. The style of her videos has also changed drastically. Her earliest videos were talking-head monologues. Recent videos contain miniature narratives inhabited by reoccurring characters, often with a self-referential and sarcastic tone, with the situation depicted in the video reflecting a specific issue, as well as serving as commentary on specific kinds of creators or media formats. An example of this is her video focusing on the dissemination of explicitly anti-semitic views, "Debating the Alt-Right".

See the main article on this topic: Gender

Wynn has made several videos about the concept of gender. Her work critiques transphobia, transmisogyny, misogyny and gender roles. Her videos on gender usually focus on right-wing ideas of gender and how they conflict with the lived experiences of transgender and non-binary people. She has also severely criticized other trans women who ally themselves with trans-exclusionary feminists or anti-SJW skeptics (for example, Blaire White), both in her earliest videos and one of her most recent.[13][14][15]

Wynn has made videos criticizing the anti-SJWs, which include criticizing their blaming of feminism for allegedly "destroying" the atheism movement,[16] their overtly offensive and exaggerated style of critique[17][18] their denial of having any racial bias or prejudices whatsoever[19] and for fat shaming.[20]

See the main article on this topic: Dave Rubin

Wynn has parodied Dave Rubin's show The Rubin Report (her parody show being called The Freedom Report and having a similar intro style and theme as well as set up to the Rubin Report).[21] In one Freedom Report episode[note 2] it shows "Jackie" (the host of the Freedom Report meant to represent the centrist Rubin) clearly being influenced by the alt-right guest on her show, which seems to mirror Rubin's turn from progressive to hard right through his interactions with his right-wing guests.[22] She also said that Rubin was "a man who may disapprove of what you say but will defend to the death your right to appear on his program and spout racist bullshit without interruption or objection", clearly critiquing Rubin's interview styling of not actively challenging his right-wing guests, which others have also objected to.[23][24][25][26]

See the main article on this topic: Alt-right

Wynn has been highly critical of the Alt-Right,[27][28][29] as well as critical of Alt-Right talking points such as race[30] and their arguments against casual sex.[31] Wynn also made a video talking about how to identify fascists,[32] where she made the controversial claim that just because someone says that they are not a fascist this doesn't mean they're not one (which some in the comments section took wildly out of proportion to suggest that Wynn thought anyone who said they weren't a fascist was a fascist. What she was actually doing was applying the same logic we use for murderers and thieves, that just because they say that they are not criminals doesn't make them not criminals, and applying it to political labels. This was doubly funny as in the video itself Contra pointed to a fascist who was literally telling people to not openly call themselves Nazis or fascists in order to gain more public sympathy).

Wynn dislikes TERFs and transphobic women for their exclusion of trans women from women's spaces and movements,[35] cultural appropriation,[36] pick-up artists,[37] the concept of alpha males[38] and pop feminism.[39] Wynn later retracted her comments about pop feminism in a video commentary.[40]

Wynn's views at the creation of the ContraPoints channel were strongly influenced by New Atheism and the atheist community on YouTube,[41] as well as disillusionment with the academic left.[42] At the time YouTube atheism was, by her account, disintegrating as a community and marked by the rise of anti-feminist commentators such as Thunderf00t. Her first video reflected a compromise position between the left and New Atheists, largely accepting the latter's propaganda about feminism, although Wynn has since moved sharply away from New Atheism.[41]

In her analysis of incels, Natalie's character Lady Foppington posited their eponymous law,[43] reflecting the incel belief that much of their inability to get it in derives not from their incredible misogyny but instead from believing that their worldview is founded on unchangeable biological truths about all incels, including bone structure. Foppington's Law has also been demonstrated and is often seen in racist babbling about the supposedly "ape-like" skulls of people of African descent.[citation NOT needed]

Wynn, contrary to the right-wing stereotype around progressives,[44][45][46] frequently engages in debates and conversations with YouTubers she disagrees with, including Sargon of Akkad,[47] The Distributist,[48] Blaire White,[49] and Theryn Meyer,[50] the last of whom has since changed her opinions drastically, and worked with Wynn for a time as an assistant director, co-writer, creative assistant and sound editor on her videos.

She also engages in discussions with YouTubers she is more ideologically aligned with, such as Polite Conversations,[51][52][53] Destiny,[54][55] Abigail Thorn from Philosophy Tube[56] and Kristi Winters.[57]

Despite her overwhelming support from fans, she often faces criticism from other leftists, trans and non-binary people, specifically on Twitter and Tumblr, due to views she has that they perceive as transmedicalist or exclusionary towards non-binary people.

In September 2018, her video “The Aesthetic” caused controversy due to what many saw as a sympathetic portrayal of the character Justine, who viewed gender strictly through a performative lens rather than a psychological one.

In August 2019, she tweeted that the practice common in progressive spaces of people being in a circle and giving their pronouns while introducing themselves makes her feel uncomfortable,[58][59] causing a firestorm on Twitter and eventually leading to her briefly deactivating her account.[60] Many fans, mostly her friends and BreadTube peers but also some unwelcome figures such as right-wing hacks like Ian Miles Cheong, Black Pigeon Speaks and Blaire White[61] jumped to her defense, saying that she was taken out of context and was merely speaking about her own personal discomfort with pronoun circles rather than dismissing them as a whole. Before the deactivation, she further infuriated some by saying that she felt like “the last of the old school transsexuals” and that she was sympathetic to those who were worried about the future of trans acceptance due to “radicals” that did not pass or fit inside the gender binary.[62] After briefly handing over control of her account to an assistant, Gwen "the Quen" Kruger (who has been speculated by members of the ContraPoints subreddit as being a pseudonym for her then-friend and script advisor Theryn Meyer), she returned to Twitter on the 2nd of October[63] before permanently leaving again on the 6th of November.[64] Why? Well...

After her release of the video "Opulence" on October 12th, 2019 she was criticised for having trans male pornographic actor, sex educator and, more controversially, truscum "transmedicalist" Buck Angel play a small voiceover role in the video as the voice of John Waters.[65] Angel has also spoken out against non-binary gender identities, causing many people to speak out against Wynn for collaborating with someone who is transmedicalist and nonbinary-phobic, which in the process re-ignited multiple previous contra-versies relating to these subjects. On November 6, Wynn announced that she would leave Twitter, this time for good.[66]

Addressing of controversies in "Canceling" video[edit]

In January 2020, Wynn posted an extensive video covering basically all of the above controversies titled "Canceling".[67] Among her fans, including those who were beginning to become skeptical of her actions in late 2019, the video was widely praised as a sufficient apology as well as an insightful commentary on the idea of "cancel culture" and how it has impacted Wynn's personal life. However, her critics, such as non-binary YouTuber Essence of Thought, derided the video, claiming it was still too sympathetic to the actions of Buck Angel and incited harassment against her Twitter detractors by not blurring out their profile pictures while reading their tweets.[68][69][70]

People that are further left on the political spectrum than her, such as Marxist-Leninists, left communists and anarchists, have beef with her as well. They often accuse her of being a liberal who does not do enough to advance the leftist cause that is the supposed basis of much of her career, in some cases mirroring her relationship with other trans people. One of her characters, Tabby, can be seen as a caricature of those further left than her, which doesn't exactly help matters.