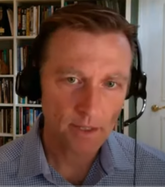 Eric Berg (c. 1972–)[1] is an American antivaxxer, chiropractor, cholesterol denialist, conspiracy theorist and ketogenic diet advocate. Berg promotes pseudoscientific health advice and quackery.[2][3] Berg is not a medical doctor.[4] Berg practiced chiropractic for 29 years and is now a full-time YouTube blogger who has made thousands of videos offering health advice. Berg has over 4 million subscribers and claims to have made over 5000 videos.[5]

Berg operates the Health and Wellness Center in Alexandria, Virginia. He describes himself as "one of the top ketogenic diet experts in the world".[6]

On his website. Berg has put a Quack Miranda Warning part of which reads "Information on this site is provided for informational purposes only, it is not meant to substitute medical advice provided by your physician or any other medical professional."[8] Berg put a similar disclaimer on his videos claiming he is not offering medical advice, cure or treatment and his videos are for "general informational purposes only".[7] However, Berg's articles and videos tell people not to eat certain foods otherwise they will become ill and that a ketogenic diet can improve "health conditions like heart disease, epilepsy or diabetes."[9] He makes videos with titles such as "Always Fast During an Infection", "How to Prevent Blood Clots, Strokes & Heart Attacks? - Tips by Dr. Berg" and "The Best 3 Remedies for Psoriasis", so he does offer medical advice.[10][11][12]

Berg is an anti-vaccinationist and claims there are many toxins in vaccines.[13] He also says there is "strong evidence" that vaccines are linked to autism.[13] This belief, found amongst conspiracy theorists, is false. There is no link between vaccines and autism.[14]

Berg promotes a ketogenic fad diet which is not healthy (it's high in saturated fat), and completely impractical for most people[9]:

Berg claims for maximum health, one should put their body into a permanent state of ketosis by eating a ketogenic diet which is extremely high in fat. Berg calls his keto program "Healthy Ketosis". On this diet 70% is fat and 20% is protein. This is totally unbalanced:

See the main article on this topic: Cholesterol denialism

Berg cherry-picks evidence that confirms his bias and ignores results from studies that contradicts his claims. He does not cite recent systematic reviews as references which is the way evidence-based medicine works. Berg cites only one scientific paper from the journal Nutrients, published by MDPI

.[27] The paper reported that randomized trials have shown that a ketogenic diet can decrease HDL and triglyceride levels but in opposite to Berg's claim most of the trials revealed an increase in LDL cholesterol levels and one study found no significant difference. Only one small sample study (66 obese patients) revealed a decrease in total blood cholesterol levels and reductions in LDL. There are no long-term studies that demonstrate patients on a high-fat ketogenic diet can decrease their LDL-C levels.

A 2019 review by the National Lipid Association Nutrition and Lifestyle Task Force concluded that although ketogenic diets may improve appetite control and triglyceride reduction they are not superior to other dietary approaches for weight loss, are difficult to maintain in the long term and have negative side effects.[28][29] The review noted that studies have shown mixed effects on LDL-C levels, with some studies showing an increase due to the saturated fat content. Contrary to Berg, the review stated that very-low-carbohydrate diets are associated with an increased risk of cardiovascular mortality.[29]

Some of his diet advice is extremely and unnecessarily restrictive (anti-wheat; anti-carbohydrate); he advocates weight loss based on a bogus hormone body type (adrenal, ovary, liver, thyroid); talks about “fat burning” hormones (they don’t exist); and includes a "detox phase" in his diet plan (a term that should raise your quack alarm).

As typical with many of these so-called health experts, his website includes a shop with unproven supplements (e.g. adrenal body type package, estrogen balance kit) that beyond being a complete waste of money, could quite possibly do you more harm than good.[2]