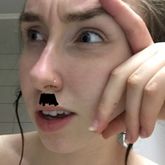 "New profile pic of me reacting to jew shit"[2]

Pead was Deputy Editor of pro-UKIP blog Kipper Central, where she listed herself as "Alison Pead".[10][11] Kipper Central suspended Pead in June 2017.[12][note 2]

Ranting Monkey: I just watched. I'm not triggered but holy shit, your argument seems to be blacks commit more crime because they stoopid.[sic] Is that right?[20]
Pead: No. My argument is that the crime rate of black individuals is higher because on AVERAGE their IQ is lower due to genetic differences.[21]

Alex: from a scientific point of view the concept of human races does not biologically exist.[22]
Pead: How do you explain the fact that on average, statistically black people are better at athletics than white people are ?[23]

Gerard: Scientific Findings and the Truth: Geneticists Have Never Been Able to Identify even a Singe[sic] "Race Gene" (link to A Formula for Eradicating Racism)[24]
Pead: Also how is it through testing you can find the EXACT race of a person? Obviously it IS a case of genetics.[25]

And on a livestream with James Allsup, Pead asserted that she actually enjoyed The Daily Stormer:[26]

Quoted tweet by Cryburger: Kangz twitter is hilarious[27]
Pead: Translation: whites modernised south africa and us Kangz are back to fuck shit up[28]

Pead is a fan of anti-Jewish bigotry. Pead has considered talking about the Jewish Question:

Fitting with the conspiracist mindset surrounding the "Jewish Question", Pead has alleged that YouTube was run by Jews:

Oscar: YouTube is runned by cucks. [Oscar's profile picture is a swastika.]

Oscar: They might as well change the name to Jewtube.[31]

Pead has also used and retweeted anti-Semitic imagery such as the Happy Merchant meme,[32] (((echoes))), and big nose jokes.[33]

Pead published a video entitled "Bill Nye the Jewish Guy" in which she whined that Bill Nye had been "infected" by "the SJW virus".[34] Although Nye is not Jewish, the video title was allegedly "pure banter for his jewish nose".[35] After backlash, Pead said her critics were "triggered" over "jokes".[36]

being Jewish (only two are) and Chester Bennington's

If you look at Germany, it seems as if Merkel is aiming for the mass genocide of the white and Germans[39]

i am german and i am so ashamed of what Merkel has done to her own folk. This is the start of white genocide.[40]

On Twitter, Pead described herself as "[f]ighting against political correctness and the authoritarian left in baby steps".[45] Indeed, on Kipper Central, she was described as a "conservative right wing authoritarian".[11]

As an illustration of Donald Trump energising the radical right, Pead says she started making videos due to the 2016 U.S. presidential election and Trump's presidency.

Tree of Logic: Now, what made you start a YouTube channel?
Pead: Um, I think most of it was basically the presidency. Donald Trump's presidency.
Tree of Logic: Really?
Pead: Yep, because I noticed so many people showing opinions about it and I sat there and I thought "I wanna do this. I wanna talk about this."[46]

Tara McCarthy: So what motivated you to start making videos?
Pead: The election. Definitely the election.[47]

Pead is a fan of Hitler:

I've developed to become so "far right" that even my mum is shocked at what i say now[.][48] "Wow! I never thought I'd hear you say that Hitler was Germany's greatest leader." For the record- he did good shit before he went completely crazy.[49]

When I was taught about history, I was taught at school that Hitler was the worst person ever and he automatically had these "let's kill all the Jews" thoughts. But never was anyone told that Hitler helped a lot with the economy. Hitler did lot of good things for Germany before he went absolutely bonkers as per se. Um, which is one thing that really does irritate me, you know, the amount of people that throw around the word Nazi. The amount of people that, you know, just talk about it as if it's the worst thing on Earth. I wouldn't classify myself as a Nazi or anything like that but, um, there are some aspects of it where that can be taken into account and you could say "OK, you know what, that does work well." Same with Nationalist Socialism. It does work well in some societies if it is implemented in the correct way. So when all these people are saying "Hitler! Trump is literally Hitler. He's literally a Nazi." I don't think these people quite understand that essentially, at first, Nazism did have some good aspects for Germany. Not all of them, I would never say it was the best thing that ever happened to Germany but he did do a lot of good things, Hitler himself.[50]

Nevertheless, she considers it stupid for others to think she, a white supremacist that subscribes to Neo-Nazi antisemitic conspiracies, cites Neo-Nazi sources, engages in Neo-Nazi apologia, loves Hitler (a Nazi), loves Neo-Nazi phrases like "Heil yes" and "14/88, loves fascism (which Neo-Nazis also happen to love), and has Neo-Nazi followers, is a Neo-Nazi.

Everyone back home thinks I am a neo-nazi. Good. I love seeing people think stupid things.[53]

IKTr: And like I said. If we have to praise any dictator that did good things. We wouldn't have democracy and freedom
Pead: Democracy is terrible though[54]

Viral_Garbage: Is there a possibility that some can be over educated, but bubbled into thinking that politics they are taught is the only possible way.
Pead: That's a really interesting question! A lot of 'liberals' as per say[sic] have a high IQ too, which gives more of a case against democracy.[55]

Pead also promotes traditional gender roles in "The Issue With Misunderstanding Gender Roles"[56] which was mocked by /r/BadSocialScience.[57]

Pead: I am going to start deleteing[sic] my old videos to cater for my new style. New video won't be out until next month or so.[58]

Yorky: Umm are you one of those nonbelievers of the Holocaust?

Pead: Do you want to preserve the black race?

Ashleigh: She asks me this question; I wonder what her response will be after I just told her my nieces and nephew are all biracial...🐸🍵[60]

Ashleigh: I know; you don't have to tell me. People like you make me worry about my nieces and nephew having to grow up in this world.[62]

Ashleigh: In response to me telling her that her ideology makes me afraid for children in my family… people think this shit is a joke, and it's not.[64]