The deep web is the part of the World Wide Web that is not findable through search engines.[1][2] In contrast, the dark web is the part of the Web that is an overlay network that can only be accessed with special software.[1] News and media outlets confuse the terms as the same thing. One example of a dark web is the Tor network. But not all Tor sites are also part of the deep web, since many of them can be found via search engines, both specialized ones, and via Tor2web through regular ones. Public exposure to the deep and dark web remains largely limited to sensationalist reporting, covering, for example, red rooms and snuff films. Unfounded myth and legend continue to seep into popular culture as well.

Why the darknet is bullshit[edit]

Deep web in a nutshell[edit] 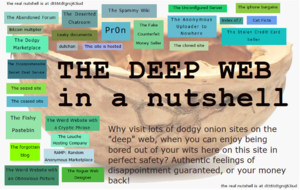 80% of the Internet exists below this line...

But wait, there's more! Some time around December 2014 an update to the infographic was created.

Why people believe this bullshit[edit]

Stories about Silk Road introduced the connotation that the Tor Network and other anonymous networks like I2P are mainly for illegal purposes. Now that this connotation has been initiated, people believe it and start their own Hidden Services and Youtube videos to prolong it.[4] Hidden services have the security advantage of having end-to-end encryption for web browsing[33] and Tor Browser has great security features; it's disappointing that the Tor Project's name is tarnished by stories related to Silk Road and urban legends.