Since the early days of the Deep Web, various websites have arisen claiming to offer various assassination services. They fall into three sub-types with highly varying verifiability and prospective authenticity. Clearnet attempts are more hilarious and the media appears more sceptical in such areas. Whilst SWATing is a real thing, it appears internet based assassination is not.

See the main article on this topic: Deep web 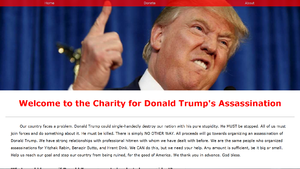 Donald Trump now has a dedicated site with zero donations!

The most notorious site is C'thulhu

, which has been reported at face value by various media outlets.[1] It advertises a variety of services, including rape, "underage rape", maiming, bombing, crippling, and murder; it is apparently run by former member of the French Foreign Legion. It accepts Bitmessage

Another such site, 'Unfriendly Solutions', purports to be run by an individual with several years of experiences as an assassin.[2] In March 2013 Business Insider performed a roundup of other such individual sites including 'White Wolves Professionals', an unnamed site and C'thulhu[3] which they got a bit of stick for.[4] In February 2016 a site appears entitled the "Charity for Donald Trump Assassination".[5] As of the time of writing, the Bitcoin address has precisely zero donations.[6]

Whilst shocking descriptions of such services may make headlines, there is no evidence that these are anything more than scams to take people's Bitcoins.

in the model of the Silk Road

has began to grow confidence in a 'bazaar' type model, with much of the English speaking carding

scene moving into markets such as AlphaBay.

Possibly seeking to capitalise on such confidence, 'Hitman Network' follows a similar such model apparently allowing individual assassins to list their services and receive feedback accordingly.[2]

In the absence of an affordable service to bootstrap and viable reputation/feedback loop, such sites are believed to be entirely scams.[8] No, not even if you accept multi-sig payment.[9]

Possibly the most intriguing model is the Assassination market

in his 1995 essay 'Assassination Politics'. He argued an ever-present threat of assassination could encourage accountability among politicians and lawmakers.

Founded in the early days of Tor, the eponymous 'Assassination Market' has been described as 'Kickstarter but for murder'. A Tontine

like system is run, where users can pay Bitcoins to a wallet address supporting an individual they would like killed. A prospective assassin can place a 'prediction' into the wallet, along with their own address should they attempt to claim the bounty. Should they succeed, the anonymous proprietor of the website having confirmed the assassination via e.g. news media, could pay out the bounty completely anonymously.[10] The site shut down in June 2014,[11] and reactivated in 2018 just long enough for the owner to cash in the 180 BTC stored on the site.[12]

Despite an innovative business model, no evidence of any murders via this method has ever been produced. According to dark web researcher the Cthulhu,

the websites in question do not even have especially hardened security configurations.[13]

Well they say it's the classified site for everything. Soliciting a murder surreptitiously via Craigslist is not known to have been successful.[14]

Oh, this has been done more than once it seems.

"Thanks to the Internet, ordering a hit has never been easier," reads the site HitmanForHire.net, in a chipper, infomercial-like tone.

HitmanForHire.net was a scam concocted by Essam Ahmed Eid, a bloke from Las Vegas who hired a Florida developer to build this wonderful site. He scammed tens of thousands of dollars through PayPal and cash in brown envelopes from hapless would-be clients before moving to Ireland. Eid was found with a silenced pistol and some home-brewed Ricin and the corresponding search terms in his Google search history however was never charged with any actual murders. He was eventually picked up by Irish authorities he was extradited to the US after his scamming and extortion operation was uncovered.[15]

In related totally-not-a-scam news, hire-a-killer.com is a similar such site.[2] They are contactable by the secure method of Gmail, take payment through the untraceable money transfer systems of Visa, MasterCard and Western Union. All you have to do is send information about yourself and your prospective victim via a handy online form.

But don't believe me, believe these satisfied customers:[16]

My neighbor let his dogs crap on my yard and then denied it. I couldn't see us reaching an agreement, so I consulted Hire-A-Killer and they gave me a great rate and an extremely fast service. Now I have a clean yard and new pet-less neighbors. Thanks H.A.K.! - Bill K., W. Virginia

My kids were pressuring me about my will and would talk about what they would do with the money in front of me. So I called Hire-a-Killer and had them killed in a tragic accident. I used the money from their life insurance to go on a cruise! Thanks H.A.K.! - Susan K., Florida

Clearly Facebook is life… and death for some people.

When in 2011 a teenager from Pennsylvania said he was falsely accused of rape, he took no delay in updating his Facebook status offering "$500 for a girls head." and saying "he needed this girl knocked off right now." Clearly the real issue is he forgot to tag her picture.[17]

In 2012 an animal rights activist from Ohio offering $730, set up her own Facebook group to solicit someone to gun down a random person wearing fur outside a library, providing he himself was not wearing fur or a fur-like substance of course. In a shocking turn of affairs it turns out the hitman she eventually corresponded with was an FBI agent.[18]

Well it turns out that people believe sufficiently in internet assassination to ask for specific help on Reddit. Such naughty people get referred to the Reddit admins who may take things to law enforcement.[19] Other scammers may pose asking for 'information' then and support their scams with shill accounts.[20][21]

),[22] enjoyed celebrity status among many libertarians[23] and drug-legalisation types, that was until murder-for-hire was added to his list of charges by the FBI. Speculation ranged for Ulbricht being just another cold-blooded drug cartel boss, to whether the evidence of murder was fabricated by alleged hit men, through to a complete denial from Ulbricht's defence alleging FBI defamation and corruption.[24] The murder charges were since dropped and some evidence of FBI corruption was in fact uncovered.[25] (Whether he is rehabilitated in light of this new development remains to be seen.)