From RationalWiki
(Redirected from Deplatform)
Jump to: navigation, search

No platform is the practice of of preventing someone—either through policy or through protest—from spreading their ideas through a particular event or website. The term generally applies to rescinding an invitation to someone asked to speak at an event (such as a guest lecture at a college). The concept apparently originates from a policy used by the British National Union of Students to prevent people they disagree with from giving speeches on UK tertiary campuses.

The idea is similar to the political action of cordon sanitaire, where a politician or political party is either unconditionally excluded from coalitions or other forms or cooperation, or even completely ignored. "No platform" is typically invoked for issues such as racism, sexism, homophobia, Holocaust denial, and so forth. As what societies find acceptable or unacceptable changes over time, so do the targets of "no platform", with 2015 seeing protests against speakers seen as transphobic or Islamophobic who consider themselves progressive as they are feminists or atheists, respectively. No-platforming is, at best, an attempt to prevent a balance fallacy, with protesters refusing to allow tacit endorsement of reactionary views. 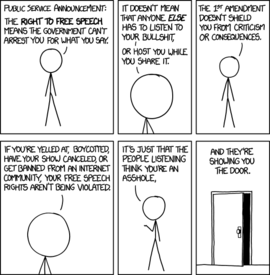 In 1994 some university papers decided to run Bradley Smith's advertisement promoting Holocaust denialism, but printed a refutation on the opposition page.[15] This was somewhat controversial, but is quite probably a more effective way to refute Holocaust denialists than ignoring them and hoping they go away. As mentioned in the free speech section above, these people will get their message out, and people uninformed of the refutations will be convinced by this. There is a caveat to refutations, however: the backfire effect, which would strengthen problematic viewpoints if they were challenged, which is among the reasons deplatforming is supported.