From RationalWiki
(Redirected from Caliphate)
Jump to: navigation, search 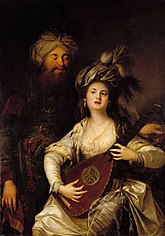 It's good to be the Caliph.

Caliph (Arabic: خليفة‎ ḫalīfah/khalīfah) is the term for the successor of Muhammad, and the head of state of a caliphate. In theory, a caliph is the supreme leader of all Muslims, from priests and commanders to even presidents and kings; he is their emperor, effectively. They all swear loyalty to him (if a suitable Caliph is available). The Shi'a and Sunni branches of Islam both recognize different lines of successors. The female version is the calipha (same Arabic word as the male counterpart), and there actually was one ruling calipha: Sitt al-Mulk.[1]

According to the Arab historian Ibn Khaldun,[2] a caliphate differs from a royal dynasty in that royal rulers tend to be self-serving and corrupt, whereas the responsibility of a Caliph of the Messenger of Allah is to look after people's wellbeing in this world and the next.[3]

A chief duty of a legitimate Caliph is to oversee and protect the safety of pilgrims performing the hajj who converge on the Arabian Peninsula from the disparate corners of Islam annually. Needless to say, controlling the holy cities of Mecca and Medina is a prerequisite for a claimant of the title.

According to the Oxford Dictionary of Islam, each individual is a caliph of God, and must strive to do his will to bring about an Islamic society.[4]

The institution of the caliph is not mentioned in the Qur'an, neither did Allah nor his Messenger speak of it, nor is there any guidance or direction on the selection method or duties of the office. It is entirely an invention of the Prophet's companions (Sahaba) upon the death of Mohammad.[5] Till the death of the Third Caliph Uthman, in 658 AD at the hand of Egyptian rebels there was no major dispute. However, Ali, the Son-in-Law of Prophet Muhammad declared himself the Caliph with the help of the murderers of Uthman. The governor of Syria - Muawiya I, and relative of Uthman revolted. The First Islamic Civil War ended with the assassination of Ali in 661 AD. Muawiya I became the founder of the Umayyad dynasty. However upon his death in 680 AD, Civil War again broke out in the Caliphate. Yazid I, the son of Muawiya I killed the son of Ali - Hussein, another claimant to Caliph triggering the Shia-Sunni divide. The war ended in 692 with the Umayyad family safely in power. As the Arab empire continued its occupation of distant areas, more and more non-Arabs converted to Islam. Discrimination against non-Arabs lead to the Amazigh Revolt in 739 (leading to the creation of a separate Islamic state in North Africa) and Abassid Revolution starting from 747 AD in Persia. The Umayyad empire lost control of practically all its regions except Spain, and for the first time the caliphate was permanently fractured. Since then various dynasties have claimed the title. In Sunni Islam, the first four caliphs of the Rashidun dynasty (Abu Bakr, Umar, Uthman and Ali) are referred to as "Righteous" or "Rightly Guided" Caliphs (الخلفاء الراشدون al-Khulafā’ ur-Rāshidūn), and ideal Sunni rulers.

The longest lived dynasty of caliphs were the Turkish rulers of the Ottoman Empire beginning when the Abbasid dynasty of Egypt surrendered it to Ottoman Sultan Selim I in 1517, ending the Arab monopoly on the title. The Turkish Sultans, as the Mongolian Khans and Persian Shahs did, added the Caliph title to a collection of other imperial honors from conquered peoples as a symbol of dominance. The Ottomans did not hold it in as high esteem as their Arab predecessors, creating some lingering resentment among the Arab populations that the Ottomans ruled. The Ottomans held the title until they finally abolished it in March 1924.

, son of Umar the second caliph, is quoted in a hadith saying,

After the Turkish Assembly abolished the Caliphate, the Muslim Brotherhood was organized to renew and regenerate the more violent aspects of jihad with an aim to bring back an Arab caliphate. By the 1950s its most famous protagonist, Sayyid Qutb, wrote that the whole of society, both those societies claiming to be Islamic and non-Islamic societies, had returned to a state of jahiliyyah[8] and hence the need to re-establish the Caliphate in a Sunni Islamic State.[note 1]

The Islamic State of Iraq was declared on October 15, 2006. The Salafist arguments behind a re-establishment of the caliphate is that parliamentary democracy creates man-made-law, whereas a basic tenet[note 2] of Islam holds that all Law comes from Allah as spoken through the mouth of Muhammad his prophet.[note 3]

The first problem Daesh encountered was how to legally establish a caliphate. There is no clear precedent on the selection method. Not just any group of sycophantic sociopaths can anoint themselves the selection committee. DAESH claimed it had a plurality of 60% of tribal Sheiks[note 4] on the terrorist umbrella Mujahideen Shura Council

.[9] So in combating the spread of democracy the Islamic State claims a consensus of the majority makes their caliphate legal.[10]

Abu Bakr Al-Baghdadi, a successor of Zarqawi, declared the Islamic State with him in charge. We'll see how well this works out. After years of war and the loss of tens of thousands of fighters, the Islamic State's territory has shrunk greatly since the declaration of a Caliphate, and all signs point to it collapsing completely—by March of 2019 they had lost their last territory, and now operate underground.

proclaimed himself Caliph. This prompted the desert bandito Ibn Saud

on the coastal plain of the Red Sea to capture the holy cities of Mecca and Medina. The Saudi clan then assumed the role of custodian of the holy places, a title held by Heshamites

for nearly 600 years but lost in the post-World War I chaos.

Muhammad Eid al-Rifai’i and his followers declared him caliph in 1993 following the collapse of the Soviet Union and the Afghan Najibullah regime. Al-Rifai called on Osama bin Laden to swear allegiance, legalized dope smoking to win support and funding from dope growers and smugglers, and kidnapped children from those who refused to pledge allegiance to him as caliph. The machinations ended when a turf war between his disciples and dope smugglers led to the murder of his deputy caliph. Al-Rifai returned to London.