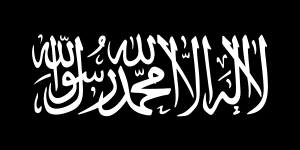 Hizb ut-Tahrir (HT, حزب التحرير, Arabic for "Party of Liberation") is a quasi-Salafi Islamist international organization which advocates for the establishment of an Islamic state, the only difference from the ethnic-cleansing lunatics being not taking violent approaches. From this aspect, you may as well call them Sneaky DAESH. Their main ideological goal is basically to replicate the Abbasid Caliphate by creating pan-Islamic global empire which unites all the Muslim societies (ummah) under the Sharia rule and reenacting the caliph.[2] Once this mission is achieved, they will proceed to subjugate the rest of the world spread their heartwarming Sharia rule by any means necessary.[3]

They are yet another organization, like Taliban and DAESH, which aims for implementing strict Sharia rule including hudud

penal code, which conducts chopping hands for theft,[4] stoning for adultery,[5] and death penalty for apostasy.[6] There's also jizya (non-Muslim tax) and all sorts of other "non-Muslim sanctions."[7] Not to mention public gender segregation and requirement for Niqab.[8][9]

HT was established by a Palestinian Muslim organization in Jerusalem during the 1950s.[10][note 1] They were in a course of decline until the War on Terror happened and rekindled Islamic defensive consciousness and decreased the reputation of the West among the Muslim population.[11] HT is banned by several countries including Germany, China, Russia, Turkey,[12] and all the Arab world except Yemen, UAE and Lebanon.[13] However, they still have branches in some Western countries including in the US, UK and Australia.

Unlike DAESH which is universally condemned by ordinary Muslims, HT has rather more significant footholds and this is what makes them inherently scarier than those knife-wavering assholes.[14] Estimated membership could reach up to one million, but it's unclear.[15] Their strategy for recruitment and gaining support is to stir the victim mindset among Muslims by invoking several geopolitical crises happening throughout the Muslim world. In the Netherlands, HT is focuses on the Israel-Palestine conflict, and in the UK, they use issues of Kashmir and Hindu-supremacism to evoke how bad Muslims need unification to stand up against the oppression.[16] Its best not having war literally all over the Muslim world.

HT is known for operating based on highly distorted and fantasized conceptions of the state, history and the modern world. Their first and foremost error is regarding the caliphate itself, which is their supposedly top priority. HT aims for the creation of the caliphate as a unitary state (not even a federation),[17] where the caliph is held accountable to the populace,[18] with all the power and functions of the state,[19] including appointing and dismissing government and military officials.[20] The caliph even would have no limitation on his period in office.[21] Women cannot be appointed to govern, and while caliph is said to be committed to the minority rights, non-Muslims don't have a say in his election.[22] Needless to say, these things are contradictory, and there's no clarification on how the caliph could manage the state by popular consent while acquiring a totalitarian level of power at the same time.

Historically, a caliphate wasn't always unified; empires such as Abbasids and Ottomans had several vassal states operating in far-reaching areas, some of which even opposed to the central administration in Baghdad or Istanbul, respectively.[23] The actual Abbasid and Ottoman eras didn't have strict Sharia rule enforced,[24] which is contrary to what is envisioned by HT and others of their ilk today. Some historians even mention that homosexual practices reached the highest level during the caliphate time, especially among the ruling classes.[25][26] Hudud law was considered there for "deterrence" effect and its application was quite rare (stoning occurred only once in the 500 years of Ottoman history[27]). Whatever the caliphate that they are visioning, it is highly plausible that it is not reality-based.

HT considers all the Muslim societies and communities as the potential territory of the caliphate. This includes the Muslim majority area of non-Muslim states including Chechnya, Moro (southern Philippines), and East Turkestan.[28][29] Once they are incorporated into the caliphate, secession is absolutely not permitted, and they are required to fight the secessionist "even if" it leads to "the killing of millions of Muslims."[30] As you may expect, some lands and territory ruled by Muslim powers during the course of the history such as southern Spain, Sicily, northern India and the Balkans are considered part of this caliphate, so Spain you're fucked.[28][29]

HT shows a communist-level of hatred toward capitalism, albeit their definition of capitalism is fluid, which they consider a political system of democracy and freedom,[31] separation of church and state,[32] human rights and religious pluralism.[33] Democracy is criticized because it gives "sovereignty" to the people, which is supposedly only held by the divine political system.[34] Any Muslims who believe in democracy are not real Muslims.[35] They are also highly critical of large corporations and exploitations.[34] Unsurprisingly, HT is against human rights which they consider as a byproduct of the capitalist system.[36] Ironically, while Muslims within the HT's caliphate may enjoy the biggest freedom among all the other social groups,[37] their freedom would be severely limited when they contradict the caliph because the caliph is ordained the ultimate authority over Muslims, regardless of whatever injustices or human rights violation he commits.[38][39] HT is also highly antipathetic towards pluralism and tolerance, and calls for Muslims not to participate in democratic institutions across the West and urging people not to integrate.[40]

Interestingly, HT often borrows language and expressions of socialism, anti-neocolonialism or social justice discourse of the West.[41][42] Critics point out the Marxist-Leninist undertone, and resemblance to socialist student movement.[43][44] They refer to sexism, racism, imperialism, inequity, etc. as social ills that are inherent in Western society and can only be cured through Islam.[45][46][47] This is a tendency which can be observed on non-Wahhabi Islamist movements including the Muslim Brotherhood.[48][note 2] This is most probably because they are feeding to the alienation of Muslims from the "Western" political and economic systems, which in itself may be a valid resentment, but not necessarily entails support to the HT's alternative.

While HT's goal is to establish a unified caliphate, and this goal is shared among other similarly extremist Islamist organizations, as is the case with all the dogmatic ideologies, infighting is more than common between them. HT and DAESH have been in a bitter feud. Reportedly, DAESH executed senior HT member for questioning Baghdadi's eligibility as a caliph.[49] HT is also having hard times reconciling with Hamas, an offshoot of Muslim Brotherhood in Gaza.[1] HT sees the Taliban in a better light though, and called for Jihad against NATO-led invasions of Afghanistan.[50] Below is a simple chart for comparisons of these usual suspects.