From RationalWiki
(Redirected from Sealioning)
Jump to navigation Jump to search

The tactic is closely related to loaded questions or leading questions (which are usually employed when using it), Gish Gallops (when asking a huge number of rapid-fire questions without regard for the answers), and Argumentum ad nauseam (when asking the same question over and over in an attempt to overwhelm refutations).

The purpose of this argument method is to influence spectators' views by asking leading questions, regardless of the answers given. The term is derived from the questioner's frequent claim that they are "just asking questions," albeit in a manner much the same as political push polls. Additionally, this tactic is a way for a crank to escape the burden of proof behind extraordinary claims.[1]

In some cases, it also helps hide the nebulousness or absurdity of the questioner's own views. For example, a 9/11 truther may ask questions about perceived irregularities in the collapse, Larry Silverstein saying "pull it," and the plane that hit the Pentagon. If turned back around on the truther, the implication is that they think that the plot involved numerous bizarre complications (rigging three buildings with explosives, making an on-the-spot decision to instruct the FDNY to detonate one of them, replacing a plane with a missile and later littering the Pentagon with plane wreckage). In avoiding proposing their own hypothesis, the questioner can come across as smoothly winning a debate, since the other person is unable to answer a "just being asked" question. In fact, it can be very useful to "just ask questions" of woos, inasmuch as getting woos to put a hypothesis forward (or even just admitting to believing something crazy) can be a worthy accomplishment.

A dead give-away is when the person using this technique ignores the answers given, and just continues to ask the same questions.

Second, it should be clear that "just asking questions" only applies when the answers are already well known, where the question embodies a point refuted a thousand times, and where the questioner exhibits willful ignorance. If, for example, someone phrased their political argument as a series of questions — but provided sources to back up said questions, or has raised logical arguments in said questions — then it is not enough to dismiss the argument as "just asking questions". 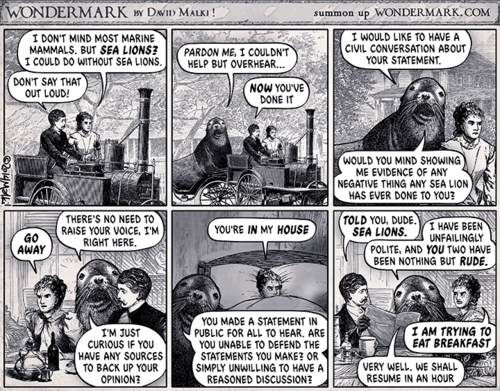 Sealioning involves jumping into a conversation with endless polite, reasonable questions and demands for answers, usually of entry-level topics far below the actual conversation (e.g. "please prove sexism exists"). This tactic differs little from harassment even if its intention is earnest; instead of discussion, the effect is to derail discussion, and results in the "sealion" receiving criticism (for their ignorance) and thus feeling like a victim, when they in fact inserted themselves into a conversation that they were not part of to begin with. As an intentional tactic, it can be used to make someone feel overwhelmed and quit talking. It is comparable to running a filibuster

(or perhaps a filibustering technique) and preventing anything getting done.

The nature of platforms like Twitter make it particularly easy to sealion, intentionally or not, since conversations are generally public, and context and communities are inherently compressed. In such contexts, any time there is a discussion occurring that involves underlying assumptions, any passer-by who disagrees with one of those underlying assumptions can derail the conversation and make higher-level discussion impossible if they are not ignored. The passer-by can quickly fall into the role of a sealion if persistent.

A particularly troublesome aspect of sealioning is that people who are genuine newbies asking earnest questions can still in effect be a sealion. An ignorant but earnest individual can easily have the effect of a sealion by asking participants to justify base assumptions underlying a higher-level discussion, where existing participants share an understanding of those base assumptions. This is often met with a hostile or dismissive response because the other participants in the discussion have already had those arguments at length, and such questions are derailing at best, and indistinguishable from concern trolling at worst. Additionally, the earnest questioner sees only their own question and is unaware that they are falling into a common pattern that the other participants have experienced repeatedly.