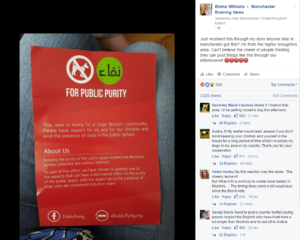 For Public Purity (FPP) is a hoax website that supports a ban on dogs in public spaces "in order to help Muslims live their lives according to their beliefs".[1][2][3]

FPP was either created or boosted to prominence by 4chan's /pol/ (politically incorrect) board in hopes of stirring xenophobic tensions:[4][5]

This is soo good, so many of them are responding to the P-blicP-rity website (don't use the actual name so news outlets like Jewzebel [sic] and other leftie shills don't search up the archives and out us)[.]

Refer to the image, but well done, it's picking up[.]

But it is legit and you are making it look like trolls are behind it.
You're an islamic apologist.

It is real, only islamic apologists would think it's fake
Go on the kikebook page, you'll see a lot of Muslims using taqiyya to claim it's fake
Also like the f*cebook page, the more people who like it, the more legit it looks

There are several further reasons to call bullshit:

Islam is damn harsh towards dogs. Notably, none of the harsh material towards dogs is contained in the Qur'an proper, but, as AnsweringIslam notes, "abound in the various collections of traditions (hadith)".[18]

For example, the Sahih Muslim hadith (one widely accepted by Muslims) writes:[19]

Whoever keeps a dog, a qiraat from his good deeds will be deducted every day, except a dog for farming or herding livestock.

While these passages (and others) establish a hostility to dogs, it's not clear that FPP is based on sound doctrine: the Sahih Muslim only refers to dogs inside, and the Al-Bukhaari merely establishes a fine &mdash. Neither imposes a ban on dogs in public places, and neither is in the Qur'an.

Moreover, it should be obvious that many Muslims do not follow hadith as scrupulously as the Qur'an, and many do not follow it whatsoever. There are many Muslim dog owners, and presumably very few of them are herders.[21][22]

Usually after FPP is brought up, the next thing mentioned is a video by a Danish woman who recounts being attacked by several men because she had a dog.[23] Despite all protests to the contrary, the video does not mention Islam or Muslims or even the skin color of the attackers — yet she mentions that her dog is a muscle dog. At the time (May 2014), ownership of "muscle" dogs in Denmark was controversial, because they are considered intimidating and threatening.[24][25]